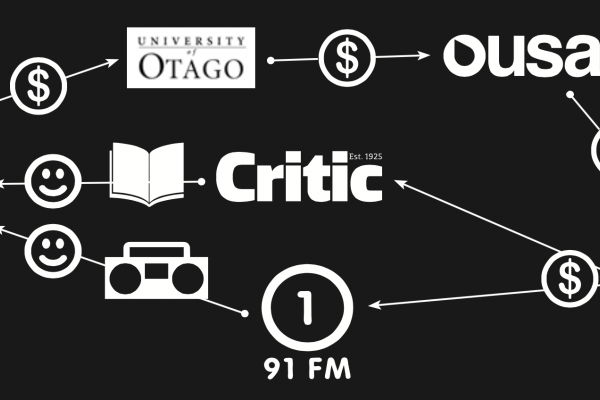 In a meeting on Thursday 30 April, the OUSA Executive decided not to call on the $240,367.87 it is owed by Planet Media Dunedin Ltd, pending a review from the company’s board. The debt is as of the end of March 2015 and encompasses accumulated debt from the last several years.

PMDL, founded in 1998, was set up to house Critic and Radio One as a fully owned subsidiary of OUSA. PMDL is now insolvent, which means that if all assets were sold, it would still not have the funds to pay the money it owes.

PMDL is a not-for-profit organisation, so even if it did make any money, the profits would go back to OUSA. However, being insolvent means the company’s board, half of whom are OUSA Executive members, must reassess its operations as board members could be personally liable.

The University of Otago gives a set sum of student fees to OUSA each year through the Service Level Agreement (SLA). Part of this sum is allocated to PMDL, whose cost centres are Critic, Radio One and a Planet Media Sales team.

OUSA CEO Debbie Downs said: “There’s always funding going through, it’s the funding that’s having to go through over and above what we’ve agreed to is where the problem comes in.”

PMDL has been in debt to OUSA for a number of years, but Downs said the reason a call on PMDL has to be made now is because the problem is getting worse each year. “Income is further down this year than it was last year. The problem is escalating,” she said. As income declines, expenses continue to rise.

Downs said the university has said it is not able to increase the SLA each year — “anything we want to add to the SLA is going to be a hard ask”.

Vice-Chancellor Professor Harlene Hayne said: “Given the financial constraints facing the university sector, I applaud OUSA for taking a closer look at the services they are funding. I encourage them to make each dollar count and stretch their funds to serve the largest number of students possible.”

The decision to demand the money owed is up to the OUSA Executive. No date has currently been made to call for the debt, and Downs said it is “too soon” to say when, “or even if”, it will be asked for.

“That’s a decision that will need to be made based on the [Planet Media] board’s recommendations and the board’s review of the workings and operations.”

Downs, who is also the General Manager of PMDL, said her biggest concern in her position as GM is “identifying new income streams” for the company. “There’s two ways to balance a budget, you either increase your income or decrease your expenditure. While I do believe there will be some expenditure that we can find that we can decrease, the biggest concern is where do we identify those new revenue streams from, and that’s difficult.”

When asked how expenditure would be decreased, she said it was still too soon to say, and depends on the upcoming review.

The review of PMDL will look at previous reports and financial statements for the company. This review will be given to the board in a meeting over the next few weeks, and decisions regarding both short-term and long-term strategies will be made.