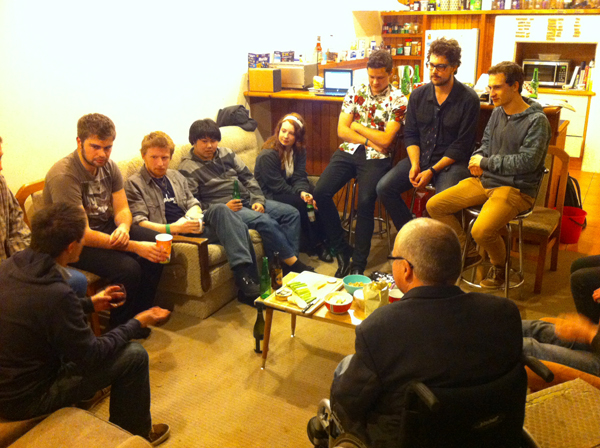 Gareth Hughes, beer pong, and how to target students

On Friday 1 August, Green Party MP Gareth Hughes made his way down to Dunedin to have what was the inaugural “Flat Warming,” a youth campaign strategy designed to bring policies to the students, not confine them to stuffy lecture theatres and awkward South Dunedin forums. The idea is to break the tension between “politics” and “youth,” which is one that Critic has touched on in the past two issues; the conclusion is that being a student, and being a youth, is very different today than it was in the past.

This has been the source of much criticism in the media, stereotyping students as a single block of lazy, binge-drinking wildebeests, which far from acknowledges the fact that it is the job of politicians and political parties to thoroughly demonstrate their capacity to understand their constituents. I don’t even have to reach far to be able to demonstrate how this stereotype manifests. How did the ODT respond to Gareth Hughes’ visit? By slamming Gareth with a piece titled “Greens face binge drinking” and beginning with “the Green Party is under fire for supporting binge drinking after challenging Dunedin supporters to beat MP Gareth Hughes at a game of ‘beer pong.’”

Not only is this factually incorrect (the ODT were the only ones who cared enough to write an article about it, so I don’t know where “under fire” came from), but it fundamentally misunderstands student culture and what Gareth was trying to accomplish. Students drink – that much is obvious – but we’re also capable of drinking responsibly and without getting out of control. That was the point of the event, to have a couple of glasses of wine that don’t cost eight dollars each and literally just chat. And, anyway, as 3 News reporter Dave Goosselink so astutely pointed out to me over Twitter, the better you are at beer pong, the less you drink.

Gareth Hughes argued “many young people get turned off by the personality politics and focus on trivialities, so wanted to have a real discussion and get the low-down on the Green’s positions this election.” That summarises the event well, which had a warm enough environment that people didn’t feel on edge at having a politician in the room. They asked a lot of questions.

Youth strategy around an end-of-semester election time provides a consistently interesting dynamic for analysing how well policies are being received, and the intensity is palpable. Gareth Hughes’ Flat Warmings are part of a wider youth strategy. Rather than being attached to an electorate, he’s attached to us.

“We are putting a big focus on it and it is the first time an MP has been asked to lead on this rather than stand in a geographic seat. We still have active campus branches and the Young Greens national network that have played a big role in previous elections but this time we are investing more resources, a data-driven campaign and more focus on personal conversations like door knocking and flat-warming parties.”

The flat warming “was a very effective way to communicate with students. Rather than speaking in an impersonal space ... it was a chance to speak about the issues and the election in a fun and informal way over a drink.”

Heading over to the Red Team brings us another plethora of strategies. I spoke to Georgina O’Reilly, Vice President of Young Labour, about what Labour is doing. Similar to the Greens, Labour’s youth campaign operates mainly under the Young Labour moniker, a youth-to-youth initiative that hopefully will stop any cringey, middle-aged attempts to get down with the youngsters.

Interestingly, Georgina was quick to point out that students aren’t the only youths out there. There’s a big push for employment and support for trades, and Georgina explained that we need to think outside the campus mindset. If we turn to schools, it’s “a biggie” that Civics is taught throughout the education cycle.

I also sent a few questions out to Katy Hendrikse of the National Party. Upon hearing about this, however, Dunedin South candidate Hamish Walker answered them himself. Katy also noted “he is excited to get a drink with you and chat about local journalism and get ‘your perspective on how to engage youth into voting.’”

As for his strategy, that involves “having a bit of fun along the way.”

“Government should be representative of the population and it is crucial that the youth perspective be represented. Being young myself (29) helps as I’m still connected with what’s happening with young people.”

Walker has thus far been true to his intent, having participated in the recent Facebook trend, the “ice challenge.” While the ODT refused to report on Walker running into Saint Clair in a kilt, the awareness he raised by doing so shows how important it is in the student sphere to be consistent. Stunts are stunts, and they get people paying attention. Walker donated money to the Otago Hospice, made it a huge social media fanfare (attracting 30,000 views), and invited Clare Curran to participate. It apparently led to him being called “a good role model for Scottish independence.” The result was a donation from the name-caller to a Scottish hospice.

The way that the relationship between students and politics will evolve closer to the election is dependent on a number of things, not least of which, the way candidates and parties plan to engage. It’s important that these strategies aren’t trivialised and condemned in local media.
The three parties I spoke to are aware that students are adults. Adults who’re being told they’re the wrong kind, adults who’re making the most of this period in adulthood where we don’t have to slave over a job, and adults who’ll probably tell you to fuck off if we’re not treated as such.
This article first appeared in Issue 19, 2014.
Posted 9:16pm Sunday 10th August 2014 by Carys Goodwin.