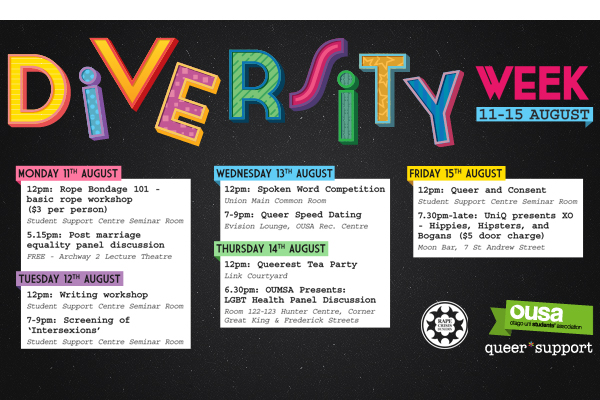 OUSA gets diverse with bondage and poetry

OUSA Diversity Week is to be held this week from 11–15 August.

Queer Support and UniQ have organised the week and, according to OUSA Welfare Officer Payal Ramritu, “have worked so hard. I have no doubts the week will be amazing!”

Every day there will be events held. On Monday at 12pm, there is a Rope Bondage 101 session, which is an introduction to bondage workshop, held in the Student Support Seminar Room. Critic will be attending.

Also on Monday, at 5:15pm, there will be a panel on Post Marriage Equality. A few years ago, before the marriage equality bill was passed, a similar panel was held so this is “kind of a follow up event from it, what has been achieved and what is still left,” says Ramritu.

On Tuesday at 12pm, in the Student Support Seminar room, there will be a writing workshop held. This will consist of two parts; one part will be a drop-in and write anything you like, and the second part will involve writing poetry for Wednesday night’s competition.

On Wednesday at 12pm, there will be the Spoken Word Competition. “I'm pretty excited to see this,” says Ramritu. “I love spoken word poetry and it will be cool to see students performing their own poems.”

Also on Wednesday, from 7–9pm at Evison Lounge, is a speed-dating event to meet new people and make new friends.

On Thursday at 12pm, The Queerest Tea Party is being held in the link courtyard. This event has been run in the past and is “well liked.”

On Thursday Night there is a screening of "Intersexions." This is a documentary about Mani Mitchell, a New Zealander who is “out and open about being born intersex,” says Ramritu. “I cannot wait to see this!” she says. The documentary involves intersex individuals revealing how they have navigated their way through this strictly male/female world and where they fit somewhere in between.

Friday lunchtime will wrap up the week with a workshop on Queer and Consent at 12pm. This will be held in the Student Support Seminar Room. Finally, on the Friday evening, UniQ Otago will host a queer dance party at 10pm at Moon Bar.
This article first appeared in Issue 19, 2014.
Posted 9:16pm Sunday 10th August 2014 by Josie Cochrane.