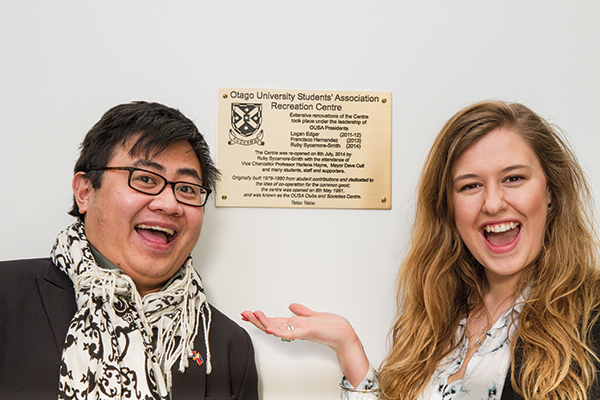 After a year-long construction process, the new OUSA Recreation Centre has officially been opened.

Staff, students and members of the public attended the opening, which was held at the facility last Tuesday 8 July. Attendees gathered in the foyer as guest speakers shared their views on how the $2 million project, funded by the sale of Mojo’s Hall and OUSA’s interest in Unipol, has benefitted Dunedin’s student community.
Vice Chancellor of the University of Otago, Professor Harlene Hayne, spoke of the importance of the student activities run from the building. Mayor of Dunedin, Dave Cull, said that the facility enabled students to burn excess energy.

OUSA President Ruby Sycamore-Smith said, “It was wonderful to have such a beautiful event and have such a great response from the community.” She described the opening as a “historic day for OUSA.” She said the new building “ultimately gives the students the opportunity to come together in a safe environment and to create, construct and come together in every avenue possible.”

The building, previously known as the Clubs and Societies Centre, had not been updated since its construction in 1980. Darel Hall, OUSA General Manager, told Critic the previous facility was “tired, both in infrastructure and visually.” He said, “the spaces for meetings and activities were good, but they’re now better.” A key aspect of the upgrade was increasing the floor space in the building, which Hall said “greatly benefits activities such as dance and yoga.” Heating and ventilation also saw a major improvement from that of the previous facility, which made the building “very cold in winter.” The foyer, where the official opening was held, has also been expanded.

George McLenaghen, OUSA Recreation Assistant, told Critic earlier this year that the upgrade allowed for a “more clubs-focused system with potential for innovations in club sport.”

Sycamore-Smith said she wants the building to be “a home away from home for every student, or at least for those who make a room booking.”

Next on the agenda is the reconstruction of the University Bookshop, which has recently been moved onto the main campus. Hall said discussions about the upgrade are well underway, however, “nothing solid” has yet been arranged.
This article first appeared in Issue 15, 2014.
Posted 6:52pm Sunday 13th July 2014 by Laura Munro.