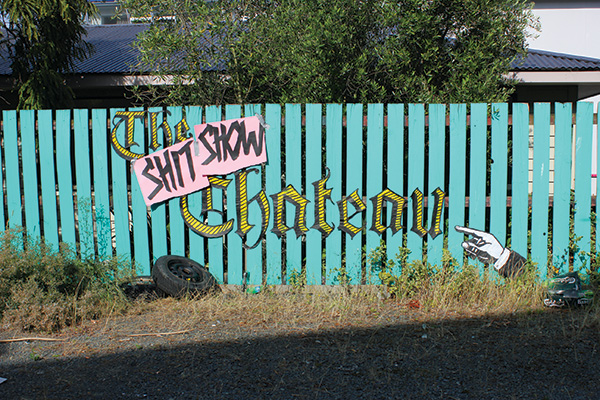 Dunedin flats to be rated, warranted and starred

Pressure mounting on Dunedin landlords to improve their offerings

“Many of the landlords are nervous about it and maybe they should be,” says Rate My Flat co-founder, Lindsey Horne. Ratemyflat.org.nz is yet another scheme putting the pressure on landlords to improve rental accommodation. The new flat rating system will launch next semester with the intention of improving on similar such tools, and will offer “an online database of ratings, comments and insider knowledge” from previous tenants, allowing students to review local flats from the tenants’ perspective.

The University of Otago Accommodation Office and the Dunedin City Council implemented the flat rating scheme STARS (Student Tenancy Accommodation Rating Scheme) in 2010, following an environmental assessment of housing in Dunedin’s Tertiary Precinct in 2009. So far, the system has assigned over 400 Dunedin flats and studios with a rating.

Accommodation Services Director James Lindsay says the system has resulted in “significant improvements, such as an increase in security and fire protection provision in flats.”

The STARS rating is based on the response landlords give to a questionnaire, which covers questions on fire safety, security, insulation, heating and ventilation. “STARS is great for awesome landlords” says Horne, “they can show off their awesome property.” She explains that the issue with STARS, however, is that “bad landlords have no incentive to bother getting a rating at the moment.” These “bad” landlords can currently ignore the ratings system with no repercussions, so the Rate My Flat scheme is designed to “empower the consumer” and will hopefully force the landlords of poorly rated flats to make improvements.

The Rate My Flat project began after a group of students decided to showcase how landlords could improve their flat conditions. For 2013 and 2014, the students moved into the “Shit Show Chateau,” voted as Dunedin’s worst flat in 2012 by OUSA. A deal was set up with the landlord to insulate the house and make it energy efficient – if he would finance the renovations, the students would do the labour. The tenants, including Horne, have since draught-proofed and insulated the house. The project, which gained widespread media attention, was “a lot more work” than the tenants anticipated; foundations had to be put in and support beams were needed in the roof, requiring the help of professional builders. The group quickly realised that the pilot project would be too much work for other students to take on in the future.

The “Chateau Crew” wanted to implement something easier for students, so they applied for the Wellington-based “Live the Dream” programme. Held at the start of 2014, it provides 10 weeks of full-time mentorship and workshops teaching various business skills. The skills are then put towards a project of their choice that will have a positive social and environmental impact. The Chateau Crew created ratemyflat.org.nz. Despite the request from Wellington City Council to set the project up in Wellington, the group chose to take it to Dunedin. “It is the coldest climate, has the oldest houses and most uninformed tenants,” Horne explained.

The Rate My Flat website now has ratings for 750 flats in Dunedin but they are aiming for 2,000 to 3,000 flats to be rated before the site goes live in mid-July. Horne says, “The idea is that tenants can look online at a flat and know what they are getting themselves into before they sign the lease.” The ratings are a result of current and former tenants filling in paper questionnaires asking questions based on the flat’s warmth (including how the flat is heated), price, landlord responsiveness and location. The questions also cover shower pressure and how soundproof the flat is “so you know if you’re going to hear your neighbours banging next door or not.”

Rate My Flat has the support of OUSA and the Student Support Centre after a Memorandum of Understanding was recently signed between both parties. The Student Support Centre is able to assist with landlord/tenant mediation and OUSA has agreed to provide up to $5,000 towards the website’s development. They will also provide staff help and advice “such as design assistance [to] ensure the job is done perfectly and aligns with OUSA well,” says OUSA President Ruby Sycamore-Smith. She believes both STARS and Rate My Flat have their advantages. “Combining the two is obviously the best outcome.”

Rate My Flat has had mixed responses from landlords and property managers. “The good ones think it’s great because [they] can have it alongside their property listings.” She says that some landlords are nervous, possibly concerned that tenants will provide false information, however, “we are making the questionnaire as objective as possible.” Rate My Flat is in contact with the Property Investments Association because, Horne says, they want to gain insight from the landlord’s perspective as to whether and how they want to be involved with them. “We really want to celebrate and showcase any improvements they make and we want to make sure that we are communicating them in a way they want.”

To address the risk that landlords could pay off tenants in exchange for a good rating, Rate My Flat will include a flagging system for dishonest ratings. For example, if you visit a flat and notice it is particularly damp or cold but the rating says otherwise, then you can flag the review.

The site will also showcase flats that do not have a twelve-month lease. “That’s a cycle we’d like to break.” They will be promoting to website visitors which flats have a nine month lease. Horne believes “It’s ridiculous that [the 12 month lease] is the norm. It’s archaic.”

The Rate My Flat team, which now involves nine volunteers, have not formally spoken to the University but they have had support from individual departments, including the Marketing Department “to make sure our site is legit” and the Centre for Sustainability “to make sure the data we collect is legit.” Horne says that at this stage they have not needed to talk to the University but, as a long-term goal, “we would love to see Rate My Flat as a plugin next to the property listings on the Otago Accommodation list.” James Lindsay of the Accommodation Office had not heard of Rate My Flat until Critic approached him, but he said “[the University] has always been active in supporting improvements either by helping landlords with advice on how to improve quality, advising tenants of their rights, or by working with OUSA.”

Rate My Flat did not indicate that they wish to replace STARS. “We are trying to come in from a different angle because they are purely landlord driven.” Horne said that they see STARS as being a part of the landlord’s opportunity to give feedback to a rating. “If they wanted to take advantage of the right of response, they could post their STARS rating.”

Lindsay says, “the STARS system is not biased towards landlords.” He explains that it uses a “self-review” questionnaire to describe certain characteristics of the property. He says the scheme, which cost the University approximately $3,000 in 2013, “is designed to empower students with more information.” They audit up to 25 flats per year to “ensure that the questions have been understood and answered consistently.”

The DCC originally helped implement the STARS system but is now part of a nationwide trial to implement a warrant of fitness for rental properties across New Zealand. The DCC have a Social Wellbeing Strategy and one of their key directions is “that Dunedin houses are affordable and healthy homes.” Rebecca Williams, Events and Community Development Manager for the DCC, said she would “encourage any efforts to get there” and that “it needs to be a city-wide effort.” The DCC are “very encouraging” of the STARS system but are now working with the ACC and Green Building Council as well as Auckland, Wellington, Tauranga and Christchurch City Councils to trial a formal assessment tool for housing.

So far 140 rental properties across the country have been evaluated. “It is a collaborative project [aimed] at making rental housing safer, healthier and more energy efficient.” The warrant of fitness will be a more formal approach to rating rental properties but it is undecided who will carry out the warrants. “The focus has been on whether the checklist is sufficient and modifications will be made.” Each council is trialling different methods of assessment; some have used environmental council staff whilst others have used building assessors.

The trial for the nationwide warrant of fitness is “a long way from being implemented” as they are currently just testing potential methods that will enable the councils to establish a national standard. Williams said she sees an organisation like Rate My Flat as “a bit like Trip Advisor,” which she would use “to form a part of my opinion by reading reviews,” but that it needs to be used in conjunction with other “more formal, standardised” methods.

Williams notes that the schemes are all after the same goal – to give tenants the opportunity to make informed decisions about their future living environment and to promote high standards among landlords. The DCC’s focus is on rental homes because people can modify the homes they own, but “if you’re renting it out to someone else, it really should be at a certain healthy standard already.”