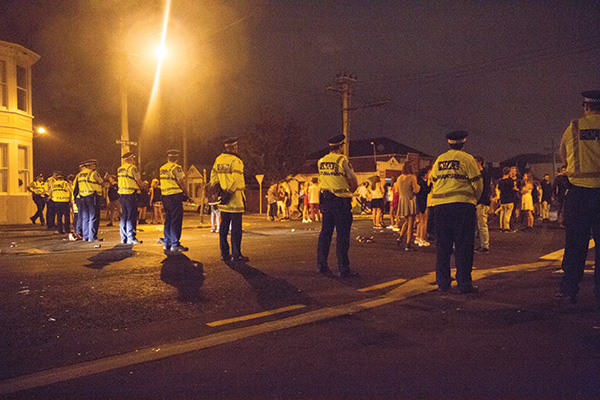 Police "can't see the bottles coming" in the dark

Three students were arrested after a large party on North Castle Street escalated with partygoers throwing bottles at Police. The party took place during the second graduation weekend of May, and saw two students arrested for disorder and another for obstruction and escaping police custody after Police were called to assist Noise Control at the property. At the time of going to print, Critic was unable to confirm if any official charges had been laid.

Critic spoke with DCC environmental health team leader Ros MacGill who said that “according to the callout report the crowd was aggressive; they threw bottles, denting vehicles and causing violence.” Southern District Command Centre deployment co-ordinator Senior Sergeant Brian Benn also agreed the crowd was “not welcoming.” MacGill said “the officers were on site for an hour,” when police were called to the scene to assist with the seizure of equipment. While Noise Control had no record of any issues with that address in the past, Senior Sergeant Benn said there had been “two recent incidents” where Police were forced to intervene.

Throwing bottles at people was a particular concern to Police who consider it “cowardly and stupid.” Senior Sergeant Brian Benn indicated to the ODT that “when it’s dark it’s quite disconcerting because you can’t see the bottles coming at you.” Although no officers were injured over the course of the weekend, previous incidents have seen a police officer hit in the head with a bottle and collapsed to the ground.

37 noise complaints were received over the weekend, with the previous weekend reaching 40 complaints. Although complaints are “no higher than usual,” MacGill emphasised that “the problem is more related to the size of crowds, their behaviour towards Police and Noise Control.” She added, the “DCC takes all residents’ comfort and safety seriously and is concerned at the increasing number of Noise Control complaints, particularly in the north end of the city, and the escalating violence and disregard for enforcement officers – Police, and Noise Control, as well as emergency services.” She reiterated the DCC’s recent statement that seized sound equipment will see the responsible person charged $56 for the cost of the seizure and $26 per day for storage. An infringement fine of $500 can potentially also be imposed.

Breaking glass and throwing bottles is a breach of the Student Code of Conduct and students can “expect to be in serious trouble,” if they don’t comply with the code. Critic spoke with Director of Student Services Karyn Thomson who said, in regard to the three students arrested, “should the evidence indicate that bottles were thrown at or violence was caused toward police … disciplinary action under the Code of Conduct could well follow.”