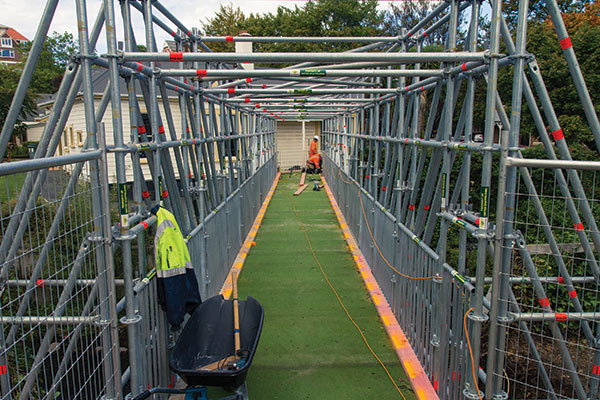 An unforeseen $100,000 is to be spent by the Otago Regional Council (ORC) on installing a temporary footbridge across the Leith as part of the flood protection works, causing further disruption to staff and students. The ORC is currently in the middle of a $5.4 million flood protection scheme in the North Dunedin region, which includes widening the Leith channel on the western side in order to increase its flood carrying capacity, according to ORC Engineering, Hazards and Science Director Gavin Palmer.

Installing the temporary footbridge will cause some construction delays and as a result the flood protection works will now continue into June, meaning that disruptions and delays will still be present during mid-year examinations. Palmer said the temporary footbridge will remain in place “until such time as the works to the existing footbridge are completed.” The footbridge will be the same width as the current bridge, be able to hold an equal capacity and have a ramped approach to account for the difference in level between the two banks of the river.

When questioned by Dr Michael Deaker about why the need for a temporary bridge was not foreseen in the flood protection works, Palmer said that access across the Union Street Bridge and Dundas Street was still available, and “it was not until late in the piece” that they expected an alternative form of access would also be necessary.

University Chief Operating Officer John Patrick said that while the “works are important,” they are “causing significant inconvenience for all campus users.” Patrick said the main areas of disruption for students are “Castle Walk and St David Street,” and this was due to “the substantial civil works being undertaken and the site facilities and plant required to complete this current stage of flood protection works.”

According to Palmer, “the project reduces the flood hazard of the Water of Leith and thereby provides social and economic benefits to areas that are directly flood prone.” According to Critic, “the project also reduces the need for students to walk slightly further than usual and thereby reduces the mental and physical benefits that active people are typically prone to.”
This article first appeared in Issue 5, 2014.
Posted 5:30pm Sunday 23rd March 2014 by Laura Munro.