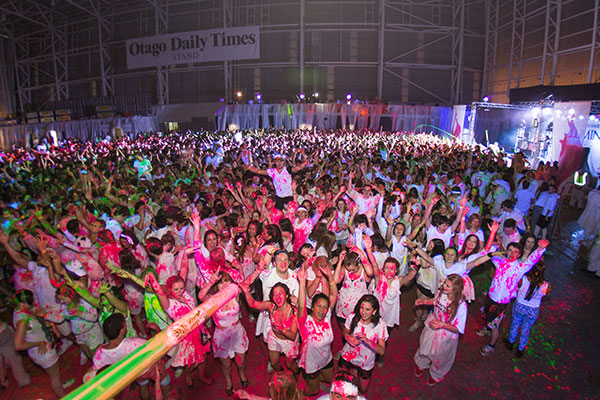 5,000 people attended the Illuminate Paint Party at Forsyth Barr Stadium on Wednesday night of Re O-Week. A combination of alcohol, drugs and large numbers of excited partygoers caused several injuries.

Nobody was arrested at the party, but the injuries that occurred required medical attention and kept staff on their toes. Those with the worst injuries were taken to hospital and dealt with by the emergency department staff, while the OUSA “Are You OK?” team and St John’s were on site to tend to more minor injuries.

Witnesses who spoke to Critic claim to have seen a male split open his forehead while tripping on acid, sporting a large flap of skin that would move when he did. As he was removed from the event, the man was observed complaining that he wanted to continue partying.

Other injuries included a broken leg and a broken nose, and a number of partygoers experienced allergic reactions to the UV paint thrown at them.

One witness told Critic about a friend who had broken his tibia without realising, and another who had chipped her tooth. “The injuries were inevitable. A concrete floor covered in thick paint made the ground slippery. The whole night I was slipping over … only to be pulled back up again by a friend.

The worst injuries occurred in the large moshpit near the front of the stadium. “People were being pushed out, falling onto others,” one partygoer told Critic. “At one point I was on the ground, arm outstretched at an awkward angle while someone else leaned on it. I was lucky not to break my arm.”

OUSA Events staff told Critic that they plan on “looking into the possibility of moving the event to a warmer time of year in the future, and also looking into adding sand on the concrete to reduce the slip factor.”

Although “lots of people were getting injured and falling over,” witnesses praised the efforts of St John’s and the “Are You OK?” team. “Even at capacity they were doing their best to make sure every injury was attended to,” one said.
This article first appeared in Issue 16, 2013.
Posted 3:59pm Sunday 21st July 2013 by Jamie Breen.