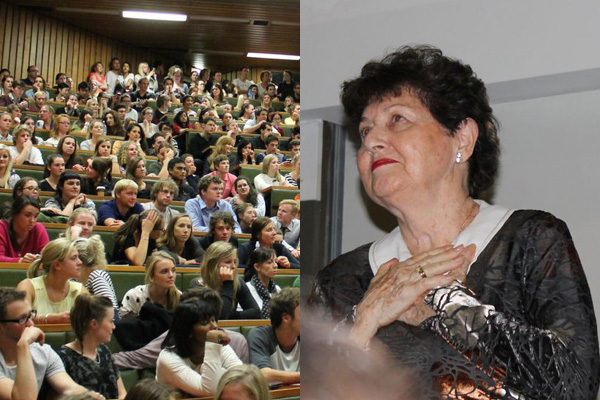 One of the last remaining Holocaust survivors on Schindler’s List

“My name is Eva Lavi. I was born in Poland in Krakow, and I was two years old when the war started.”

In the words of the woman herself, Lavi is a “child of miracles.” The outbreak of World War II saw Lavi and her family compulsorily moved into Poland’s Krakow ghetto. A week after their arrival, her grandparents were killed for being too elderly. They were 50 years old.

Lavi spent the next six years of her life fighting for survival, encouraged by her mother’s love and fighting spirit.

One particularly cold winter’s night, Lavi’s mother ushered her daughter out the window as the Nazis raided ghetto houses in search of children. “I was told to hold onto the drainpipe and not cry, to do nothing.”

Lavi recalls almost freezing to death in the -30°C temperatures, unable to feel her little fingers, but her mother retrieved her from the drainpipe when the officers had finally passed. “It shows how desperate she was, but how right she was,” Lavi says of her mother.

The situation worsened. Lavi’s father, a “very proud man,” couldn’t stand seeing his beloved wife and little girl die suffering. He acquired a poison, and put a spoon of it to the lips of Lavi. Once a fragile woman, Lavi’s mother resisted and knocked the poison from his hands.

When the ghetto was disbanded, Eva’s family was moved to the Plaszow Labour Camp. Lavi recalls that the ghetto was a good place in comparison to the camp, where Chief Officer Amon Goeth became known as “The Angel of Death”.

Lavi would have inevitably perished in the camp if not for the sympathies of German businessman Oskar Schindler. As she lined up to go to work at one of Schindler’s factories, a Nazi Officer questioned the usefulness of an 8-year-old factory worker. Schindler showed Lavi’s little hands to the Nazi Officer and assured him he had delicate work for her slim fingers.

However, in yet another unfortunate twist of fate, Lavi’s train was diverted to Auschwitz en route to the factory. She spent several months there before her family finally made it to Schindler’s factory where, in reality, Lavi would never work. “I did nothing at the factory. I was not there. I was not heard. I was not seen again.”

Following the war, Eva’s parents had vowed that she would be raised like a normal girl. It wasn’t until 2006, after the death of Lavi’s mother, that Lavi began to speak of the nightmare of her formative years.

“I don’t wish that anybody would pass such an experience. The good things, the bad things. There is nothing so bad [as] the war. I can’t really explain. I can’t.”

Eva’s thoughtful recollection of such a horrific and testing time in her life was met with a standing ovation from the crowd. Lavi was visibly moved by the reception as she clasped her hands to her chest and wiped tears from her eyes.

Lavi’s talk is part of the Holocaust Outreach Project jointly run by the Jewish Federation of NZ and the Zionist Federation of NZ. Ben Isaacs, President of the Dunedin Jewish Students Club, worked hard to have Dunedin included in Lavi’s tour, which was originally approved only if he could get 50 people along. Isaacs was “blown away by the talk,” and remarked that Lavi’s experiences are “rare to find today.” Lavi was in NZ from 5 April until 19 April.

Watch a video of the lecture at critic.co.nz/HolocaustTalk