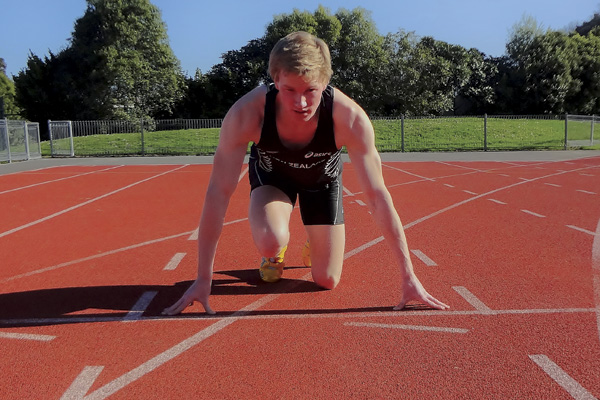 Not much about Andrew Whyte would lead you to think that he is one of the fastest men in New Zealand. For a start, he is white. Really white. The kind of white that comes from growing up on a farm in Clinton, Southland rather than the beaches of the Caribbean. He is also not particularly athletic-looking. More wiry than muscular and only about normal height. Usain Bolt or Michael Johnson he is not. The only things that would make you suspect that Andrew Whyte is faster than your average Commerce student are his suspiciously shaved legs and a little bit of the trademark sprinter’s swagger.

Andrew Whyte is the fastest man over 400 metres in New Zealand. In 2012, straight after 10 weeks off with a stress fracture in his shin, Andrew was fast enough to come third in his semi-final at the World Junior Athletics Champs, a race won by eventual London silver medallist Luguelin Santos. Last week he added the Open Men’s New Zealand 400m title to his previous Junior title, as well as a second in the 200m. Otago University’s Andrew Whyte is one of the fastest blokes in the country.

You would imagine that to get to this point Andrew would have progressed smoothly through the age group ranks, but it hasn’t really been like that. “I’ve only been competing seriously for 18 months. I stopped doing Athletics when I was 13 and then took it up again towards the end of seventh form. It was injuries that stopped me and also that I lived on a farm, so there were no real training facilities. I also had Sever’s disease, which causes your heels to fuse together a bit while you’re growing. Once I got older I wanted to give running another try and see if I was still quick.”

Without many people outside athletics noticing, Andrew has quietly become one of New Zealand’s most promising young athletes. “At the moment I am level two carded. That means the only people receiving more funding than me in athletics are athletes like Valerie Adams. I am also on the Prime Minister’s scholarship which pays for my university.”

Despite scholarship offers from prestigious US colleges such as UCLA and Florida State, Andrew decided to stay in New Zealand. “I thought I’d be better to stay here if I wanted to make it to the Olympics. I seriously thought about it, but I don’t really like the idea of running ‘for’ a university. They want you to run every week even if you don’t want to. Over here I’m not obligated to do anything if I don’t want to.”

It is tough to find regular high-class competition in New Zealand. “There aren’t many serious events. There are the [NZ] Nationals but you have to go to Aussie for events. They have a circuit with five big races. I’ve been injured so didn’t go last year, but I’ll go this year in April. It’s a lot better to go to Europe. There you can have three or four big races in a row rather than just a one-off.”

The long-term goal is the Rio Olympics in 2016, with the Commonwealth Games in Glasgow next year a stepping-stone on the way. Andrew will be 22 when Rio comes around, just entering his prime as a sprinter. Until then a steady diet of physio, massage and training with the Hill City club are all Andrew has time for when he’s not working on his Commerce degree.
This article first appeared in Issue 6, 2013.
Posted 4:40pm Sunday 7th April 2013 by Gus Gawn.