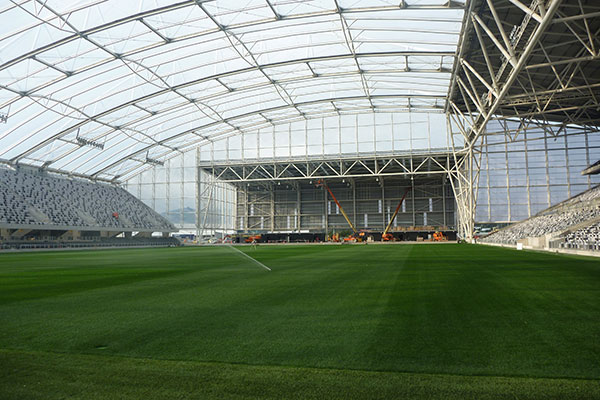 Signs of life in Otago rugby

The Otago Rugby Union has been chewed up and shat out this off season. For a while it looked like they might not even be able to afford a team, let alone win any games. But with the ITM Cup already underway and an exciting win against Northland, things are looking up. Critic asked injured student Razorback and six-fingered Waimo Keiran Moffat about what it's like to train with Gordon Tietjens, the all-conquering Taieri Eels, and how the Otago team is looking from the inside.

Earlier this year you made the New Zealand Sevens training squad — tell us about Gordon Tietjens.
I was just stoked to be given the opportunity. The training camp was held at Mt Maunganui in January, after the national Sevens tournament in Queenstown. The camp was mainly training, with the last day consisting of trials. I was a little nervous as I had heard some pretty horrendous stories about “mental” testing. I learned heaps. I am fairly new to Sevens, so I took the opportunity to soak up as much as I could. I learnt what it takes to be a part of Gordon Teitjen’s sides and what he expects from players.

Do you see Sevens as a possible career path?
Yeah, for sure, especially with the inclusion of Sevens in the Rio 2016 Olympics. This year I was given the opportunity to play in the UK and Europe, in the UK super series for the Templars (a Barbarians-type invitational team).

Whats the secret to the Eels’ success of late?
I would put it down to friendships on and off the field. When we weren't on the field we were socialising off it. There is a strong bond between the players. It also helps to have a superstar to knock the nut over from 47m on full-time.

You were selected for the Otago ITM squad, but you're injured at the moment — how much involvement have you had with the squad?
Yeah, I broke my foot in the final. It was pretty bad timing, but it's all part of playing a contact sport. I am heavily involved with the team, and I'm hopeful to be back in a few weeks, so it is essential for me to be up to speed.

The ORFU's money problems are widely known. Have their finances had a noticeable effect on how the team operate?
Yeah, it was tough times for a while. We’re still feeling the effects as a team and as a union. I really believe it has brought the team closer together — we share a bond. The majority of us are local players who feel a strong connection to Otago and the people here. You can’t buy passion, and that’s what the team brings this year.

Do you think the fact that Otago is relying on local talent this year is an advantage or disadvantage?
It was a move by the ITM coaches to let Otago players play in club season, including the final.The community and club rugby has become a strong focus for the union. Clubs are starting to reap the rewards of developing home-grown talent that fans can relate to. I think the two Japanese players added this year are a real point of difference. They are very likable guys and fit in really well.

Is Otago really on track to getting back to being a competitive union, or are they still way off?
I think it will take a number of years for Otago become a superpower in NZ, but it is achievable. It's still early days to regain financial stability. However, there are people who are extremely motivated to ensure Otago becomes the proud union it once was. The pride is already back in the team, and this will hopefully help the fans get along and support us.

What are your goals for the rest of the year, both as a team and personally?
The team wants to win each and every game. This is achievable if we keep building like we have. After ITM cup I'll change back to Sevens mode, with possible tournaments in Singapore and Dubai. These will help me build up to nationals, and hopefully push for a spot in Tietjens' squad. Also, big thanks to my supervisor Jackie Hunter for being so understanding with my lack of work on my thesis this year. He is the athlete I model myself on.
This article first appeared in Issue 22, 2012.
Posted 5:17pm Sunday 2nd September 2012 by Gus Gawn.