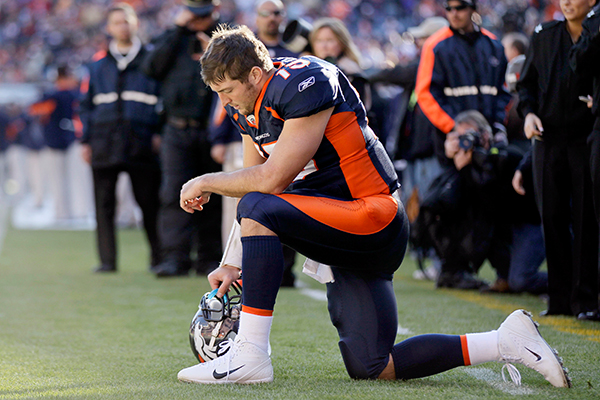 Religion in Sport? No Way.

Religion is everywhere in sport. If you watch any sport at all, it’s impossible to avoid seeing someone thank the big man upstairs for letting them make all the people they have beaten feel like shit. Luckily in New Zealand we like to keep it to a minimum, and thankfully when a prominent sportsperson does let a little bit of Bible mumbo-jumbo slip through their muscular lips we all get a bit weird and embarrassed. Nick Willis, take note.

I'm an atheist, so you won’t find any limp-wristed pandering here. As far as I'm concerned, religion is a ridiculous pursuit. Whichever way you look at it, it pokes its ass into the air and begs to be mercilessly fucked/ridiculed. Being religious is right between driving while drunk and lighting a cigarette at a petrol station on the list of things that an intelligent and reasonable human being would never do.

Some people have said that sport is a religion. Though I can see where they are coming from, they are wrong. Sport is better than religion because it is actually real.

Here are four oblique reasons why religion should be banished from sport.

Religion is a convenient sidekick to sports in two ways. First, inciting your faith is an easy way to appear humble while in fact being extremely arrogant. For example, how many times have you heard something like: “I would like to thank Jesus for blessing me with these gifts.” What you’re meant to hear is: “It's not my fault I'm so damn awesome, I'm just lucky”. What they are actually saying is: “I am fucking awesome, did you see me out there? And there ain’t nothing you can do about it either.” See? Outrageous arrogance hidden behind Christian humility.

What's the best way to unite a large group of enthusiastic men who aren't necessarily that smart? Prayer. American sports have been doing this for years (especially football) – it works an absolute treat.

02 | Religion gets in the way of potential

We need look no further than All Black legend Michael “Iceman” Jones. His refusal to play on Sundays hampered an otherwise incredible career. If he hadn’t been so darn good it would have been a huge problem.

Tim Tebow is the only virgin in the NFL.

The London Olympics is the first games where every country has sent female competitors. It’s taken 116 years of modern Olympics to get every country on board. Thank you religion.

Do you remember when Israel Folau was going to take two years off from his budding rugby league career to perform a mandatory Mormon mission? Luckily he found a loophole and put it off so he could sign a $6 million deal to play AFL. He’s now left the Mormon Church for a religion which doesn’t force him to sacrifice the prime years of his sporting career.

Luckily, many Kiwis find mixing religion and sport a little awkward, the most recent example being the public reaction to Nick Willis' open and honest but low-key Christian beliefs. I think that to many New Zealanders, thanking God or whatever comes off as a bit disingenuous. We ask ourselves: why is this athlete thanking something that has had no tangible effect on their career success? Shouldn't they be thanking their family, friends, sponsors, and coaches first? Also, New Zealand’s secularity means that whenever someone starts blathering about God our inbuilt defence mechanism arouses suspicion that they are trying to convert us. This is the same defence mechanism that can instantly tell the difference between a Jehovah’s witness and a businessman cycling home (the trick is businessmen don't cycle in pairs).

04 | Why would God favour one side over another?

Why would God help one side over another if they were both of the same religion? Athletes will often claim that “God was on our side today”. Does this mean that the other team did something to offend God? Maybe if a predominantly Christian country, say the USA, was competing against a predominantly Muslim country, say Iran, the US players could assume that they have the Christian god on their side. But what if they lose? Does that mean that God was on the other side…?

What about sports like boxing? I don't think any god would help Floyd Mayweather Jr smack someone in the head so hard that they lose consciousness. I'm certain God wasn't on his side when he was doing the same thing to his girlfriend.