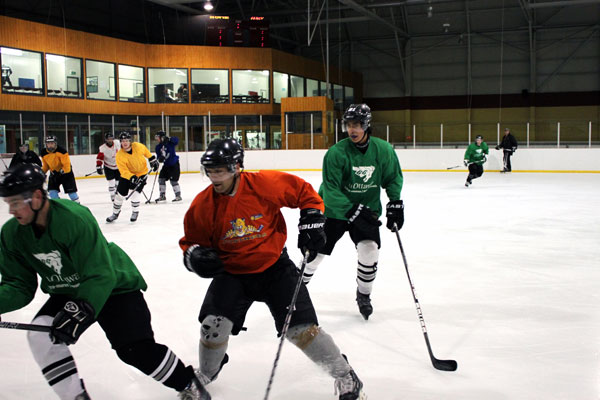 This week we go back to talking about students doing well at sports you don’t know much about … Ice Hockey.

If New Zealand were a few degrees colder ice hockey would be our national sport. Just like rugby it is rough, tough, fast and exciting. Unlike rugby, nobody gets paid. In fact even the best players have to pay to play. Cheers SPARC.

The Dunedin Thunder is an amateur organisation that competes in the NZIHL (NZ Ice Hockey League). Three teams from the South Island and two from Auckland compete for the title. The Thunder play and train at the Dunedin Ice Stadium out by the beach. Critic went out for a visit to talk to student players Cameron Frear, Rick Parry and Paris Heyd as well as Finnish import Matti Haapakoski about the upcoming season.

The Dunedin Thunder are a young and exciting team with a good mix of locals and imports. Otago student and Thunder stalwart Parry thinks they can aim for the top. “We are the team to beat this year. We’ve got a professional coach, a really good core of local guys and the imports add a good amount of flair and personality in the locker room.” Frear adds, “we think we can definitely make the final. We’re a uni-based team so we have our individual goals to beat the places we are from. Rick’s from Auckland so he wants to beat the Auckland teams. I’m from Queenstown so I want to go over there and beat the Southern Stampede. They get big sold-out crowds and it’s always good to go and beat the boys that I grew up with.”

Watching ice hockey in person is a completely different experience to watching the NHL on TV. It’s so much more exciting. Parry agrees: “It’s definitely a catchy sport but nobody knows about it. The international hockey series in Dunedin last year sold out three games. To people who know the sport, that wasn’t a very high standard of hockey. They threw 100 grand promotional budget at it and made it a great spectacle. Unfortunately the Dunedin Thunder weren’t allowed to be involved at all so we didn’t really get any benefit out of it.”

It’s no surprise if you haven’t heard of the Dunedin Thunder, let alone been to a game at the Ice Stadium. “We have no promotions budget so it just comes down to the players wanting to put the time in to promote the team,” Parry says. The Thunder have been making an effort to increase their visibility. Last week a fundraiser game, Locals v Imports attracted a crowd of around 400, but money remains tight.

The financial problems of the club make it tough for the players who have to entirely pay their own way. Even the imports have it tough. Matti Haapakoski flew all the way from Finland to play for the Thunder. “I just play for the experience. I don’t get paid. I come because I want to play all year round. The team organises me a job while I am playing. The reason I came to Dunedin is because they have a great rink. Rick takes really good care of us, everything is done really well. When I was coming here we could tell that everything is done with passion and love for the sport.”

Funding problems exist even for those good enough to make the Ice Blacks. Dunedin-raised student and Ice Black Paris Heyd (who has also played at a high level in France) said, “playing for the Ice Blacks is a massive financial commitment, so a lot of people can’t play. There is no funding by SPARC. It’s all funded privately, by our parents, our summer jobs, however we can get the money.”

The Ice Blacks currently struggle to gain ranking matches in Division 2b. The Thunder boys think that with a bit of extra funding there is easily enough talent in New Zealand to be competitive at world tournaments.

The Thunder are training hard under their new coach, ex-Hungarian international player Janos Kaszala. After watching these guys train and seeing first-hand their commitment to the sport I would highly recommend heading to the Ice Stadium on Saturday June 9 at 5pm for their first game of the season. Ice Hockey is an unbelievable sport to watch live and these guys deserve a bit of support. They might even let you ride the Zamboni.

Critic has some free tickets to give away for the Thunder’s opening game. Facebook us if you’re interested and I’ll arbitrarily decide who gets them.