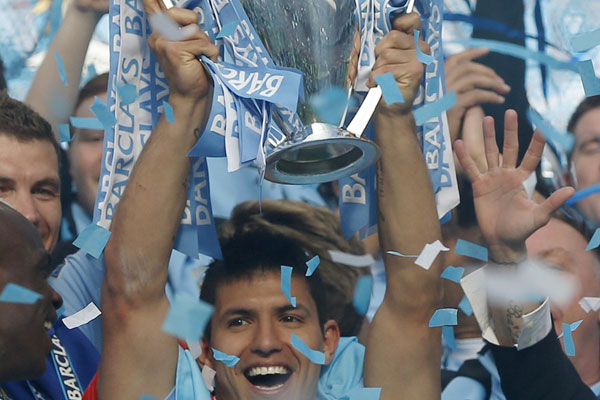 You can still buy the title

Jack Walker did it for Blackburn Rovers in 1995. Roman Abramovich did it for Chelsea in 2004 and 2005. Now Sheik Mansour has done it for Manchester City. The easiest way to turn a mediocre team into Premier League Champions is to spend shitloads of money on new players. The “price” of the premier league trophy has grown considerably. It cost Jack Walker £25 million’s worth of new players. Abramovich spent around £110 million on his first title winning squad. Sheik Mansour has spent an outrageous £400 million on transfer fees to assemble a team capable of beating Manchester United. £400 million! Plus a further £500 million on salaries. That is one costly little trophy to have on the mantelpiece at Abu Dhabi United Group. The Sheik himself didn’t even attend the decisive final game against QPR, preferring to “maybe” watch it on TV.

This might be the last time we see a foreign investor spending their way to the Premier League title. UEFA’s “financial fair play” regulations are set to be enforced in the near future, preventing clubs (like Man City and Chelsea) running at massive losses except for huge cash injections by ridiculously wealthy owners.

You need a deep squad to win the EPL

It’s no longer enough to have one or two world-class players supported by small cast of decent-quality players (take note Arsenal). To win big trophies you need a large squad of entirely top quality players. When the season gets busy teams involved in four competitions at once can be playing two or even three games a week. That means the backup players are going to be playing some pretty important games.

City won the Premier League title because they have a squad in which every player is basically good enough to be a starter. They were able to keep a quality team on the field right until the end of the season (although bombing out of the Champions League helped a bit). Of the other teams which threatened for the title only Manchester United were able to stick with City until the end. Injuries and fatigue derailed Spurs and Chelsea. Arsenal sleepwalked through the first 3 months and never had a chance and Liverpool insisted on overpaying for mediocre British talent so ended up with a worse squad than Everton who spent almost nothing. City ended the season with four fit strikers who would walk into most teams in Europe. United had Rooney and … umm … Welbeck?

United performed remarkably well with the players they have

This was the worst United team that I can remember. Yet they still came within a minute of winning the title. There can be only one reason: Sir Alex Ferguson. In England a lot of attention is paid to transfer values, goal tallies and which owner is buying which player. Coaches are hired and discarded with reckless abandon, sometimes before they have had time to unpack their toothbrush. It’s no coincidence that the club that has won the most titles in the Premier League era (since 1992) has had just one manager. Outside of Sir Alex there have been 258 different Premier League managers appointed. 258!

United managed to almost win the title with a team that consisted of Wayne Rooney and pretty much nobody else. Apart from Wayne Rooney I can’t think of a single player who would make it into the Man City team (maybe Vidic when he isn’t injured, so never).

Sometime in the 80s, somewhere in the squalor of the Buenos Aires villas miserias a new type of footballer was invented. A player with undeniable skill and enthusiasm. A bulldog of a player, who would endear himself to fans through effort, energy and sheer weight of goals. A player so skillful he would be yearned after by the biggest clubs in the world. This player was Carlos Tevez, and he would become a magnificent tool used to rip off the richest men in the world and make football agents ludicrously rich.

Carlos Tevez is the embodiment of everything that is wrong with professional footballers. He bitches and whines. He plays for himself and not the team. He is ridiculously overpaid (£250,000 a week). He is so selfish and arrogant that no player or manager has been able to tolerate him for more than two years at a time. He is two-faced and a liar. He could have cost City the title, yet he celebrated like he had won it on his own. The worst part is City will keep paying him as long as he keeps banging in the goals, or they will sell him to the Italians who want him so badly and make his despicable agent Kia Joorabchian even richer than he already is. Your job is to kick a ball Carlos and you are paid handsomely to do so, now shut up and do it.
This article first appeared in Issue 12, 2012.
Posted 7:58pm Sunday 20th May 2012 by Gus Gawn.