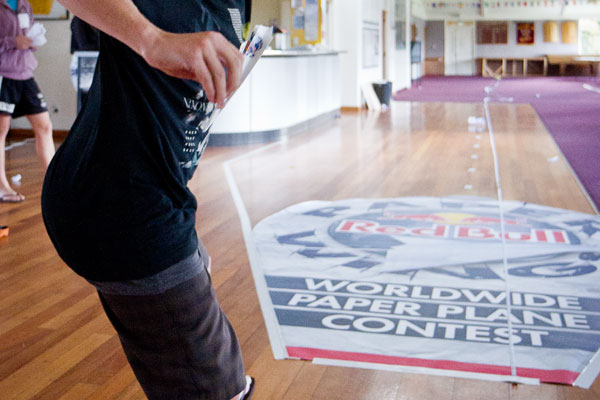 This is the sixth issue of Critic for 2012. Apparently it only takes six weeks to abandon journalistic credibility and just start reporting on stuff that provides free energy drinks.

When you think of Red Bull you think of extreme sports. Maybe a grinning Scandinavian guy pushing the limits of gravity and daring. Maybe a heavily tattooed motocross rider straddling a dirt bike with his stripper wife draped over him, ubiquitous flat peak pulled down over his lank hair and weaselly, white-trash features. Maybe just a short-haired European man driving an extremely fast car. All I know is that the Red Bull website has an official section simply labeled “Holy Shit”. That’s what Red Bull is.

On Wednesday around lunchtime Critic visited the Dunedin leg of the worldwide paper dart flying competition “Red Bull Paper Wings”. The whole time we were there I don’t think the words “holy shit” were uttered even once. This may have been because Red Bull holds the property rights for the phrase and wouldn’t let anyone say it, but it was probably because Red Bull Paper Wings didn’t quite live up to Red Bull’s extreme credentials. Maybe when you reach the big time it gets a little more “extreme”. Dunedin distance flying champ Josh Stewart will be flying to Vienna to find out.

Hyped up on free Red Bulls three members of the Critic team entered the first event on the schedule, “Longest Distance”. Basically you had to make a plane and see if you could biff it the length of the Alhambra clubrooms.

After a period of strategising and testing (as well as getting loaded up on caffeine) the Critic boys joined a group of around 30 others waiting nervously to put their flying machines to the test. DJ Hugo set the mood with some “flying music/progressive house”, the Red Bull Girls were there keeping score and the Red Bull rep David Booth was keeping the crowd on their toes with some running commentary.

Up stepped first contest Josh Stewart who immediately demoralised the competition by smashing the 30-metre mark with his very first attempt. From there everyone was playing catchup. The next best throwers struggled to break 20 metres. Critic ad-man Sam Stuch went for a traditional design, which got him a respectable distance. Critic sports reporter Gus Gawn would have snagged the bronze medal but apparently just scrunching up a ball of paper really tight and throwing it as hard as you can is against the spirit of the competition. You can’t argue with results though. Designer Andrew Jacombs just stuck to taking photos, probably because he has extremely small hands like a carny. About half the darts performed woefully, plunging straight towards the throwers’ own feet or even doing a U-turn and heading back the wrong way. Just as many flew straight and true, just not as far as Josh’s.

Stewart’s effort was never really in danger. Josh said “I got a design off Youtube and I have a reasonable arm. It’s all about the dart design really”. He favoured a very small and streamlined model, which he folded extremely tightly. His winning throw measured 30.1 metres, followed by James Scoll in 2nd and Andy Bowie in 3rd.

Evan Millar took out the longest hang time award ahead of Hugo Webb and Tom Wu. Unfortunately none of their efforts were enough to challenge for the national title so they will have to settle for regional honours.

In the “aerobatics” competition the finalists (Evan Miller, Matt Johnson, Matt Soundy, Marlon Johnson and Josh Bone) will all have footage of their efforts uploaded to www.redbullpaperwings.com/newzealand and an online vote will decide the winner.

Red Bull Rep David Booth said he was “really happy with how the event went, there was a good vibe and a great atmosphere. I’m keen to see what Josh is capable of.” Critic is keen to see what sort of free Red Bulls for the office David is capable of after this article/advert gets published.

When Critic went to print Josh Stewart’s 30.1 metres was the longest dart throw in the country and the second longest in the world. Josh will be traveling to Vienna to take part in the world finals in May, a fact which he finds “brilliant, brilliant” . Unfortunately for Josh, American Joe Ayoob will be the man to beat with a current best of over 69 metres.