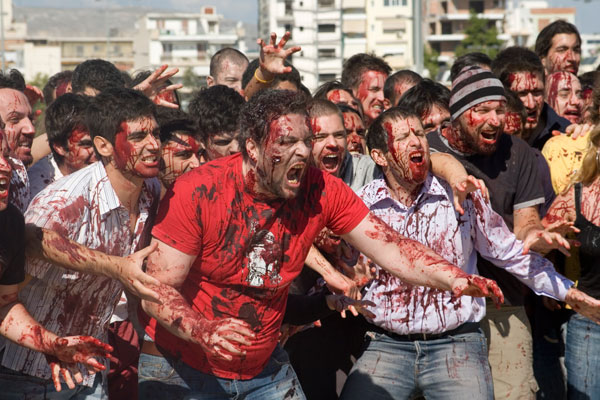 Fails to plan for Zombie Apocalypse

The University seems to have disaster on the mind, with assessment and construction underway to address the risk of earthquakes and floods.

A year after the devastating 6.3 earthquake in Christchurch, Otago’s Christchurch campus, which houses the School of Medicine, is undergoing repairs, which are reported to be “coming along well.” The focus of the work is to make the medical school, which was built in 1972, “100% compliant with the new earthquake code”. The buildings are expected to be reoccupied sometime in the second half of this year, with Otago researchers and scientists using a variety of buildings provided by the University of Canterbury and Lincoln University in the meantime.

Meanwhile back in Dunedin, the University is pushing ahead with its seismic strengthening of University buildings, with $50 million set aside in a Priority Development Plan Budget to complete the strengthening work by 2019.

To rectify its sub-standard journalism the last time Critic reported on seismic strengthening issues, Critic would like to relay to students that the Alpine Fault line is not the closest fault to Dunedin nor is it likely to do little damage. It’s fucking miles away and totes dangerous. Happy now?

There are actually 30 active faults between here and the Alpine fault, “three prominent ones within 15 minutes’ drive of the University,” according to one impassioned Geology student. Furthermore, “the one that poses the most threat … is the Akatore Fault which runs parallel to St Clair beach. If that one goes like it has in the past, it’ll displace Dunedin by maybe 5 metres vertically.” Critic retracts its previous reassurement and instead advises students to be very afraid.

In other risk news, contractors of Otago Regional Council are carrying out flood protection works on the Leith. It is hoped that the work, which will take place over the next one to two years, will help convey flood flows down the Leith and reduce its annual tendency to wash away first-year Health Sci students attempting to get to St David’s via the nearby bridge.
This article first appeared in Issue 6, 2012.
Posted 7:07pm Sunday 1st April 2012 by Margot Taylor.