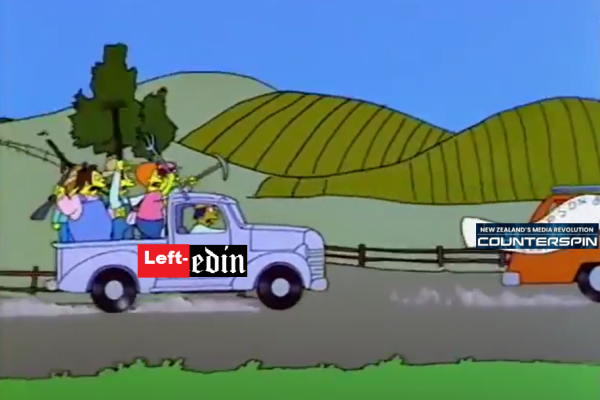 A nationwide tour by Counterspin, a group promoting Covid-19 misinformation and often violent rhetoric, was forced out of Dunedin city after sustained public pressure caused several hosts to pull out.

The nationwide tour, titled “Let’s Not Forget,” had stopped in 21 different towns and cities around Aotearoa before arriving in Dunedin. The group has been hosting talks promoting conspiracy theories related to Covid-19 and “the Great Replacement” (the idea that Jewish elites are promoting mass immigration to “replace” white European populations). They also promote the “common law movement,” i.e. the idea that individuals can pick and choose which laws are “valid”.

They originally planned to be hosted by the South Dunedin Community Hall, run by the Otago Darts Association. When Critic Te Arohi initially contacted the Hall on Wednesday, administrator Peggy Donaldson told us that “We don’t care if you’re pink, purple, polka-dots or whatever,” but apparently they draw the line at “sustained public pressure to cancel a conspiratorial hangout”.

Sustained pressure from community activists led to the booking being cancelled the very next day. The South Dunedin Community Hall said on their Facebook page that “There is NO booking tomorrow to an outside group, despite what it says on any flyers or on a website that you may have seen. The board is dealing with this issue.”

By 1:30pm on Friday, Counterspin had booked a new location for their meeting: the Burns Hall at the First Church of Otago. By the time Critic got through to Reverend Ed Masters, the church’s minister, it was 1:55pm, and based on his exhausted tone of voice, it seemed he’d already gotten tens of phone calls and texts. Reverend Masters told us that the church was “reviewing the booking”. An hour later, the booking was cancelled once again.

In a statement, Reverend Ed Masters, the Minister at First Church of Otago, told Critic Te Arohi that: “A routine booking was received for a public meeting in one of our venues… After being alerted to the nature of the meeting, and undertaking our own research, First Church has cancelled the booking. The views promoted by Counterspin Media do not align with our values as a loving and welcoming church community.”

After criticising the church for “backing Pfizer over freedom,” Counterspin was left looking for alternative venues. Finally, three hours before the event, Counterspin’s director Kevyn Alp boasted on Telegram that: “We have now got a venue that will not be cancelled”. Public pressure had forced Counterspin out of Dunedin city, past the airport to the Henley Community Centre: a full 32km from their original location. Henley Community Centre did not respond to Critic’s repeated requests for comment.

Hopeful attendees were left confused after the multiple venue changes, and some expressed disappointment that the venue was now well out of the city, suggesting attendance was well below what Counterspin leaders would have hoped for. Counterspin’s Telegram chat turned their anger to Dunedin, calling it "Left-Edin" and a "home of black magic and witchcraft", which might be true. They denounced the many people who pressured venues to reject them as "trolls" and "satan's minions", which, again, might be true.