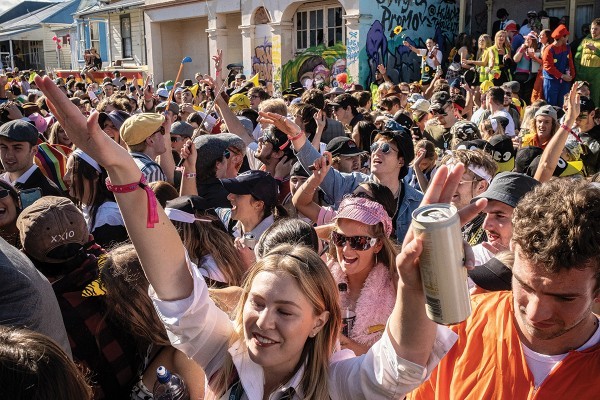 It turns out they CAN stop us all

A pisstake of a Facebook event page has been taken down after its creator received a stern talking to by the Campus Cop, who was worried it could “put the future of Hyde Street in jeopardy”. The page encouraged students to storm Hyde Street, as “they can’t stop us all.”

Will, a student with too much free time, was the diabolical genius behind the Facebook page. With the price of Hyde tickets going up again this year, the prospect of free (forced) entry seemed to be appealing: the event managed to get 243 people “going” or “interested”.

One person who didn’t appear to enjoy the joke was Senior Constable John Woodhouse, the Campus Cop. According to Will: “The guy who contacted me seemed to know it was a joke, but didn’t find any of it funny.” Critic suspects this is because Woodhouse, like everyone else, found the joke funny in 2019 when it was still popular, during the “Storm Area 51” craze, and has since moved on to better taste in jokes. Will got pulled into a meeting with Woodhouse, who apparently began by asking if he was a law student. After responding with a no, John explained the concept of “inciting disorderly action”, which swayed Will into taking down the page.

Woodhouse told Critic Te Arohi in a statement that: “The author of the page agreed to remove it and no further action will be taken.” He added that: “I will do everything in my power to ensure the success of this event, and any action of this type may put the future of Hyde Street in jeopardy.” Woodhouse is not the Hyde Street guardian that we deserve, but he is the one we need right now. Sort of like Batman.

Will told Critic Te Arohi that when he started the page that he had ”zero intention of following through with this.” He added that storming the gates en masse was ”probably the worst way to get into Hyde, [and] it would be easier for anyone to buy a ticket”. Will also said that he was pleased to take down the page, because “now I don’t have to deal with people asking why I didn’t storm Hyde.”

For the record, and as previously reported, OUSA does not profit from Hyde Street tickets, and the price increase was because the price of all the event materials (especially portaloos) skyrocketed. Blame Putin, or something.