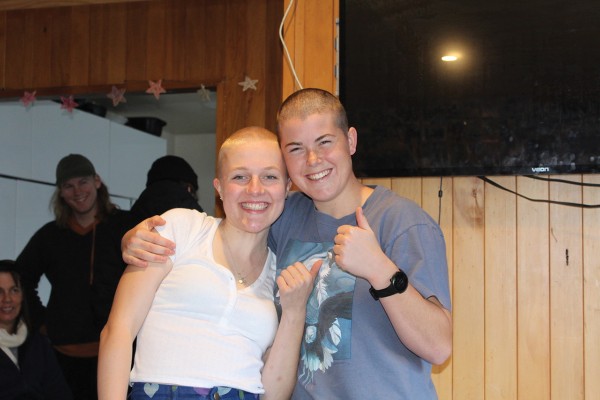 It’s for charity, at the end of the day

Two third-year students managed to raise almost $6,000 for Leukaemia and Blood Cancer New Zealand, as part of Shave for a Cure. Critic Te Arohi spoke to the two do-gooders to find out how they pulled it off.

What started as a comment about how much easier it would be to gender-bend with a shaved head turned into a major charity effort. Last Saturday, Georgia and Tessa (nicknamed Greyhound and T-Dog respectively) shaved their heads with their neighbour’s ball-trimmers. The pair raised a whopping $5,821 through a combination of online donations (including one from Thailand) and auctioning donated goods. Georgia speculates that this generosity arose at least partially from sales of Tessa’s feet pics. Tessa denies this.

“On a serious note, we all know people who have been affected by cancer. Uncles, grandpas, grandmas, friends, you know? It’s a huge thing, and we’ve got the passion and the personalities [to do something like this],” said Georgia. While they’ve repeatedly been told how brave they are for sacrificing their locks, both disagreed with this sentiment. “It’s just fucking hair,” said Georgia, adding: “And we think we’ll look pretty hot bald.”

Inspiration for the auction came from their mate George, who hosted a similar event as a first-year in Aquinas. At first, like him, they went door-knocking on George Street, but when that flopped, they instead started emailing “every company that came to mind, even for a split second,” said Tessa. This ended up being so successful that “we ended up with deliveries like every day.” As an added bonus, “the delivery guy, he’s really sexy.” Nice.

With a successful night of auctioning behind them, the freshly-bald Greyhound and T-Dog encouraged readers to come say hi to them. Asked if they would do anything like it again, Georgia responded: “If anyone reading this wants some help with charity work, just flick us a message on @wevegot_abiton,” their shared Instagram. “We’ll do the auction.”