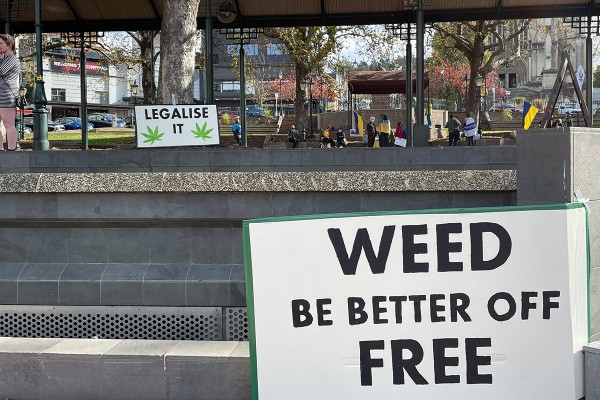 J Day Lights up in the Octagon

War on Drugs protest right next to ones for Palestine, Ukraine

J Day hit the heart of the Octagon last Saturday from noon till 4:20 (blaze it, nice). J Day is an event 20 years in the running, calling for weed to be legalised and more generally a celebration of cannabis culture. Critic Te Arohi reported from amidst the smog and bravely conducted interviews over blasting techno and Bob Marley.

Bert Holmes, organiser of J Day, saw the event as a “chance to come out of their bubbles and reconnect.” In reflecting on the Ukraine vigil and Palestine rally (both happening simultaneously in the Octagon), Bert said “it’s been quite a big day of action on anti-war.” “The war on drugs has thrown money at modes of engagement with drugs such as policing and it’s not working.” Indeed, the enforcement of current drug legislation is racist, with Māori around five times more likely to be convicted for cannabis-related offences than non-Māori, despite using cannabis at similar rates. Bert said that the conversation has started to move away from the war on drugs rhetoric of “say no to dope” to broader questions of why people take drugs. Fundamentally, J Day “reminds people action still needs to happen [and] why we don’t just live like it’s legal,” said Bert.

Critic Te Arohi sat down with Sam, president of Students for Sensible Drug Policy (SSDP). Sam described the vibe as “chill man, you know stoners.” SSDP aims to “educate people  about the ways drugs cause harm in our society and about how to use drugs safely, as well as lobbying for a world free from drug harm,” said Sam. One of the top tips for safer drug use listed on a SSDP flyer is to “try to have someone sober with you.” SSDP was also giving out information on Know Your Stuff, a safe space where students can anonymously get their drugs tested.

In a techno infused interview, Critic Te Arohi made Fraser, a J Day participant, “feel like a cannabis advocate”. “If I had my way we’d do this every weekend… get the cars out of here and the people back in the Octagon… no separation man… oil this and SUV that and [redacted] alcohol, [redacted] ban alcohol. This should be our space, every Saturday night, all night,” said Fraser. Fraser described cannabis laws as a “human rights issue,” before highlighting the intersectionality at play: “if you’re a rich c*nt you just get a slap on the wrist.”

Critic Te Arohi ultimately set out to answer the question that is on everybody's mind: was there free weed? “There is a table with an ashtray on it with a bag of what looks like kief and some rolling papers next to a koha jar and a cannabis leaf. I don’t know if they have all come from the same person but they’ve just coalesced,” said Bert. Take from that what you will.