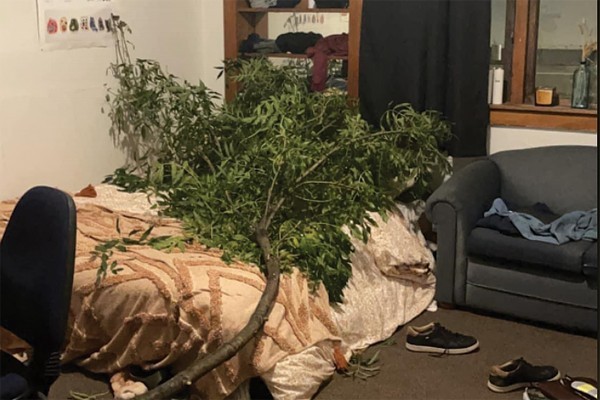 Blood Oath Taken Between Three Students Swearing themselves to Secrecy

A little over a month ago we reported on a mysterious tree that showed up in a student’s bed on a Saturday night. Our crack detective team turned up no leads until the case was blown wide open by an anonymous online confession.

Seth reported finding a large tree branch in his bed after a night out, with no other signs of forced entry and no clues as to why he was the target. After an initial investigation, Critic Te Arohi’s lead detective could not find any clues as to who committed this crime of opportunity, or maybe even this crime of passion, because we don’t have a fingerprinting kit or a lead detective. However, after seeing a UoO Confessions post, Critic was able to locate the self-proclaimed “tree planter”. They proved their identity with a time stamped photo of the tree waiting for Seth to come home.

Magnolia* and her two friends had finished a night flat hopping on Castle. When they were on the way home, the group saw a guy dragging a branch around. “We decided it was ours and stole it from him,” Magnolia said.  While dragging it away with no real plan in mind, they saw the glory that was Seth’s room. This is where the trail gets spicy. It turns out that the tree planters do, in fact, know Seth. “Not super well”, they said, but they do know him. Was this a crime of passion?

While Magnolia has only had “great experiences with Seth” in the few times she has met him, she and her mates “drunkenly decided that Seth would love this branch on his bed.” After finding the front door locked, they snuck around back as stealthily as three people could sneak while dragging a gigantic tree branch. Magnolia hopes Seth and other students take this as a lesson to not leave flats unlocked because “we could have done so much worse.”

After seeing the Castle St Facebook post and the previous article, Magnolia’s group swore to secrecy, saying “We can’t tell anyone, it has gone too far.” For now, they have gotten away with what could be described as North Dunedin’s perfect crime. Critic is hoping that Seth and the tree planters will be willing to meet face-to-face for a televised interview. Watch this space.