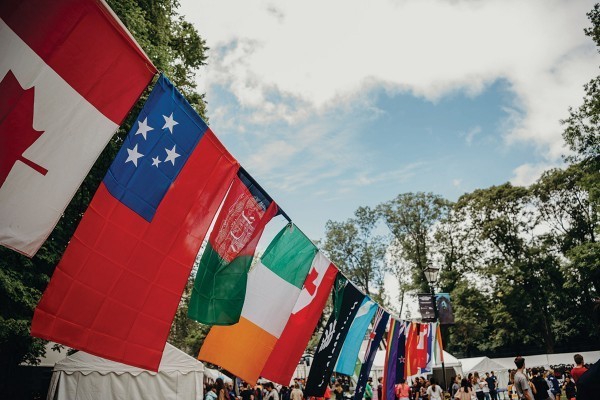 Muslim and Atheists Students’ Associations Assigned to Share a Table

This sounds like the setup for a bad 90s sitcom

The Muslim Students’ Association (MUSA) and the Society of Atheists, Rationalists and Skeptics (SARS) were assigned to sit together during OUSA’s clubs week. Despite the potential for awkwardness, both sides seemed to brush it off easily.

In issue 7, Critic Te Arohi reported on OUSA’s Clubs Week, an initiative where clubs were each given 90 minutes and a shared table at the Link to promote themselves to students heading through campus. An unknown individual reached out to us, pointing out that MUSA were assigned to the same time-slot with SARS. They told us it was “kind of f***ed up putting a vulnerable minority with a group hostile to them”. But this critique did not seem to come from within MUSA.

George Lethbridge, MUSA President, seemed to shrug off the situation. When approached by Critic Te Arohi, he said that he had “no real comment on it”, because MUSA “didn’t interact with them much”. He said “It was more of a funny coincidence than anything.”

Thomas Cawood, the President of SARS, also found that there wasn’t much interaction between MUSA and SARS during the time slot, but “a few people came up to the tables who were interested in both clubs, which is always nice to see.” He added that this was “a bit amusing, especially considering we were also taking over from the Otago Campus Christians”. But he was keen to clarify that: “SARS has no issue interacting with any religious organisations. It’s something we welcome, and wouldn’t have chosen a different time slot if that was an option.”

Thomas rated the experience overall “8/10” saying that he “would definitely do Clubs Day with the Muslim Students Association again”.

Kathryn Corry, OUSA’s Clubs Development Officer, told Critic Te Arohi that “Clubs applied [for time slots] through a process of choosing a rostered time. They were all aware of who was rostered when and had the option to change if requested. Both clubs in question didn’t indicate any unhappiness and overall the days were a success. We welcome your feedback, and aim to foster an inclusive environment for all.”

Critic Te Arohi notes that this Clubs’ Day table has been single-handedly more successful in fostering world peace than most intergovernmental institutions. Critic proposes that the Chinese, Taiwanese and Hong Kong Students’ Associations get assigned to share a table next time around.