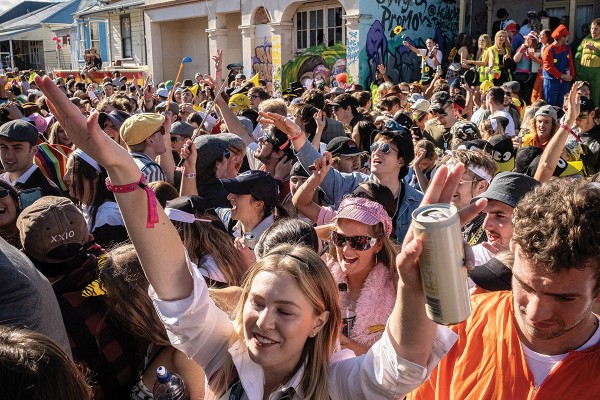 Last week Critic Te Arohi reported that Hyde Street ticket prices have jumped this year by 10% ($5) for students and a whopping 35% ($7) for street residents. To get to the bottom of this, we spoke to Jason Schroeder, Events and Venues Operations Manager for OUSA.

Just like any good conspiracy, it turns out that there’s a deep-seated reason behind the price rise, which Jason quickly pointed out was not OUSA being greedy. “We’ve seen an increase in cost everywhere we go, it's really supply chain issues at the end of the day” he said. One of the main increases in costs comes from portaloos, which apparently went up by over $1,000 this year.

When asked if OUSA could just dig a big pit in the back of someone’s yard to save on costs, Jason clarified that “We talked about options we can build ourselves but it’s not that simple unfortunately.” He also joked that OUSA could just “not provide toilets at all, if you really want to save money”, but that seemed like a shit idea.

Due to the event being pushed back into winter, Jason said other costs came from “trying to provide hot food options, more toilets, more security, and more shelter. We're also spending more on St John because the risk of Hypothermia increases.”

One Hyde St goer suggested “instead of spending money on more security and fences they could spend it on a decent sound system.” For the record, OUSA doesn’t actually buy the sound systems. In other news, a student named Will has just started a public Facebook event planning to storm Hyde Street: “They can’t stop us all!”

However, with the supply chain price increasing, Jason said “this is the reality of events moving forward.” Critic Te Arohi expects a transition to bush doof events, as bush poos are good for the soul, and good for the bank balance.