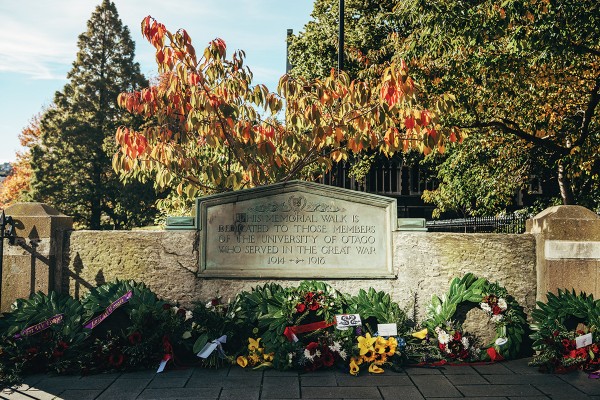 Around 200 people of all ages, from students, to staff, to elderly servicepeople, attended OUSA’s 2022 annual ANZAC Day service.

Held by the Memorial Walk outside the Staff Club building, this service was the first to be held outdoors since 2019. The weather was mostly sunny, although the wind tunnel that is Union Street served to direct some gusty southwesterlies straight towards the podium.

In attendance were members of the OUSA Exec, the Uni’s Chancellor and Vice-Chancellor, local MPs David Clark and Michael Woodhouse, and Dunedin’s Mayor, Aaron Hawkins.

OUSA’s President Melissa Lama and Tumuaki of Te Rōpu Māori, Jade Mills, jointly delivered the welcoming address. “I know it’s been a tough year so far for many of us,” said Melissa, “so I’d like to acknowledge… your willingness to come together as a community to reflect, give thanks and remember the sacrifices of the many selfless soldiers who fought to ensure we have a better today.”

Jade encouraged the audience to “not give up on fighting for a better future for our children and their children.” She spoke about her koro, a Korean War veteran: “He is a constant reminder that on days like today, each and every person who went to war, or was affected by war, deserves just a moment of our thoughts.” She finished with the whakataukī in the subtitle above: “Take hold of the paddle of the past to navigate the waters of the future.”

Melissa, in her ANZAC address, reflected on the Otago students who chose to serve in wartime, and “the pure resilience and life experience endured by our students… [who] put everything on hold to serve in the war, return home and then continue their studies”. She focused on the 21 final-year medical students who volunteered to serve in World War I, bringing forward their final-year exams so they could graduate from medical school and serve as soon as they could. “This is the part where I feel most connected to ANZAC Day,” she said, “to know I’m a part of a bigger vision, filled with hope and determination.” She concluded: “I encourage us to be brave, in our pursuit to keep each other safe. To remember that our actions affect generations to come.”

Although ANZAC Day is generally a time to reflect on Aotearoa’s military history, the violent war in Ukraine, and the rise of totalitarianism and militarisation worldwide, seemed to cast a contemporary gloom over this year’s service. “We are increasingly living in a world in which oligarchies are beginning to flourish,” said Chancellor Dr. David Higgs, introducing his reading of Percy Bysshe Shelley’s poem “Ozymandias”, a reflection on “mortality and authority”. Historian Dr. George Davis, describing the violent turmoil of Turkey post-World War I, said the “conflicts were creating a similar catastrophe to that which is now happening in Ukraine”.

Liam, a student, told Critic Te Arohi it was his first time attending an ANZAC Service: “I lived pretty rurally, so never had a chance to attend one before.” He was there with Daniel, who said it was important for students to remember Aotearoa’s war legacy: “Every generation needs to know about this.” Also present was Rose, who said she felt that living in Aotearoa, it was a “duty” for her to attend. Originally from the Pacific, she said it was important to remember the soldiers who fought so she could live in Aotearoa, adding: “We’re pretty lucky it wasn’t us.”