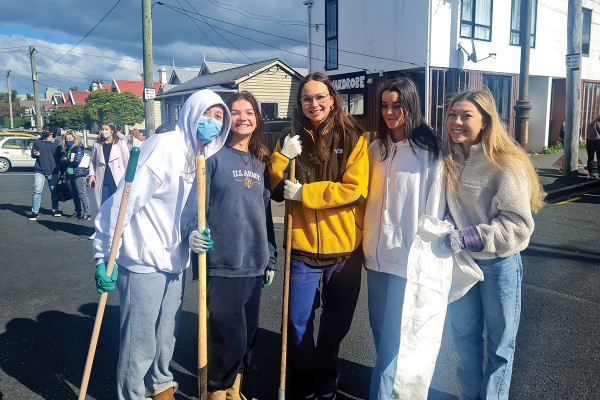 Castle Residents Pitch In To Clean Up Their Street

At noon on a Friday, most breathas would have still been sprawled in bed, wincing at the sunlight streaming through their ratty curtains. But on April 8, several hundred students instead had brushes and rubbish bags in hand, cleaning up the streets of North D.

The group of students, mostly residents of Castle Street, came out to participate in the North Dunedin Street Clean Up. The annual event is part of the Sophia Charter, set up in memory of Sophia Crestani, a second year who tragically passed away at a party in 2019.

Some students told Critic Te Arohi that they had heard about the event through the Unicrew volunteering group, or through the Uni’s ads. But the vast majority we talked to said that they heard about the event through Castle 22, the private Facebook page intended for residents of Castle St and assorted hangers-on. Once the post was shared onto the 6,274 member-strong group, word about the street clean-up spread through North D’s flats faster than a flame licks across a dry couch.

Once students were aware of the event, participation was enthusiastic. Over 100 people clicked “going” on the event’s Facebook page, and it seemed that far more were in attendance. Students ranging from first-years at halls to postgrads turned out to sweep North D’s streets, chucking glass into recycling bins and clearing up St Paddy’s leftovers. The level of commitment from those we talked to could touch even the coldest, most cynical postgrad, and bring a tear to the most jaded BComm student’s eye.

Although some residents were surprised at how many people showed up, they were incredibly pleased with how many cared about making Castle just that little less scungy. Ana, from 8-Man, remarked that almost every flat she knew had come out to help. She said that “It’s an encouraging thing to see that despite the epic Covid lows of the past few years, [we still got] a turnout of more than 150 people committed to doing better.” Events like this show that while couch fires can be put out, Castle Street’s spirit burns forever.