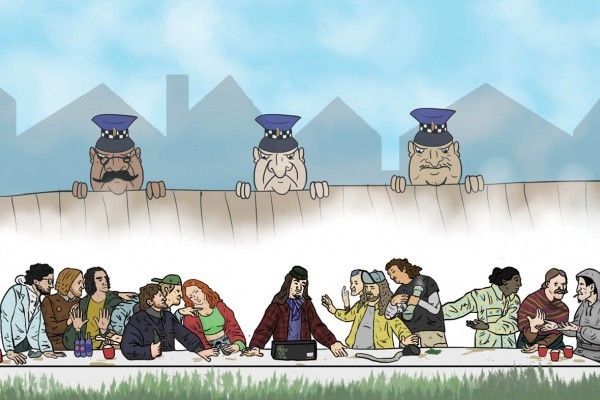 “Here for a good time, not a long time”, says student there for four hours

Like its namesake, the post-mandate rager at Castle Street’s Death Star was structurally questionable but fully operational. It was also full of massive fucking weapons.

With the Government lifting most Covid gathering limits last Friday, party-starved breathas jumped at their chance. First off the blocks was Death Star, who scheduled a “STREET HISS” for that Saturday night. With 650 people registered as “going” on their Facebook event, it was well on track to be the biggest night of the year so far.

By 10pm, the street was already crowded, with police cars sectioning off either end of the block. With blasting rave lights and enough DnB to induce a hangover on impact, the balcony was filled with what we assume were the elite-tier breathas, fist pumping to what may or may not have been the beat. Some people had climbed a neighbouring wall, and seemed unsure what to do after the fact, while the rest of the crowd dispersed through Castle.

Though the theme was “silly kit”, most people arrived completely casual, with a box in hand. Of the people who actually tried, the most popular costumes seemed to be bananas, reused St Paddy’s gear, and some form of half-arsed cowgirl made from Glassons offcuts. One person we interviewed dunked on a nearby Where’s Wally, saying that “it’s a shit costume, ‘cos I can see him right there.”

There were cops stationed at both ends of Castle. They were not dressed up, unless they were just really convincingly sober students in police costumes. An officer told us she had no reservations about the party, but “anything could happen”. She had just started her shift, and said she’d be out until 3am. In between questions, two separate groups of students stopped to ask her and her colleague for a photo, an apparently common occurrence.  We helped to take those photos, holding back an irresistible urge to yell “acab”.

We spotted one girl at the fringe of the road, dragging a road cone in one hand, carrying a quarter-full bottle of Absolut in the other. She was somehow the most lucid person we talked to that night. Was she having fun? “It’s pretty shit,” she replied. “No one’s dancing. No one is having fun but no one has anywhere to go.” She told us she was seriously debating going home to watch Bridgerton in bed, forlornly dragging her cone into the distance.

Moving through the crowd, we spotted hotdog Kobe again, who (after a lot of prompting) verified he was still “in it for a good time, not a long time.” Someone on the roof of Death Star threw some tied-together sneakers over a powerline only a foot away, which Critic notes is cheating. The crowd didn’t cheer.

The large recycling bins normally set up on Castle for large parties were notably missing. As we waded through a sea of bottles and cans, we spotted a gaggle of freshers wearing tiaras and ‘Bride to Be’ sashes, somehow managing to look both wasted and bored. All agreed they would much rather be streaming everyone’s favourite period drama in their hall. We were interrupted by screaming from another group of girls as a dirty sock landed in their midst. We never did find out where that dirty sock came from, but it was a great shot.

It didn’t seem to bother them though, as they were drunk and frankly living their best lives. Two of them, Leilani and Finau, were more concerned about our reporters being “so good-looking and the best bitches ever,” which more than earned them a high-five. Despite their unbridled enthusiasm for the party, they wholeheartedly agreed that Bridgerton would have been a far better time, although one of them admitted they were already ahead of us: “You should’ve watched it last night bro.”

Through the night we were also offered a Maōri-Asian mutual anti-racism bodyguard pact (accepted) and the heart of one young mulleted Southland male (denied, but Jacob, if you’re reading this: I will admit your 2019 Triton ute is actually pretty cool). It seems like once again Castle Street took many prisoners, and there were no winners. None, that is, aside from maybe Netflix.