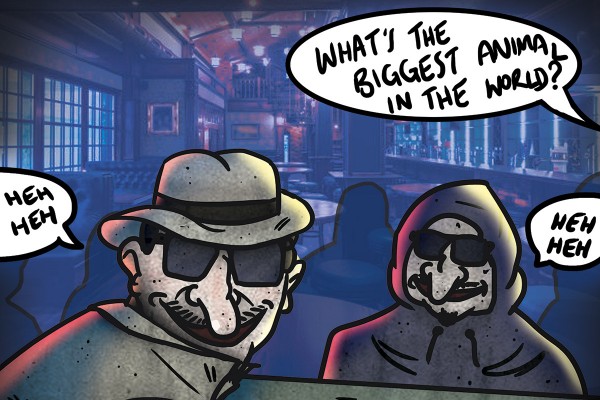 You Gotta Cheat It to Win It: Is trivial cheating slowly killing pub quizzes?

Pub quizzes are one of the more wholesome sides of student drinking culture. With pubs back open in Level 2, there’s nothing like testing your knowledge and your friendships by battling other teams for a bar tab or some Speights tees. However, in recent years cheating has reportedly become more and more common. Spurred on by easy access to information via cellphone and complacency from organisers, cheating threatens the competitiveness of pub quizzes. But has it become an unavoidable feature of the pub quiz scene in North Dunedin?

Anecdotal evidence would suggest that cheating occurs at most student pub quizzes. The vast majority of students interviewed by Critic either admitted to cheating themselves or suspecting another team was cheating in the majority of quizzes they had been to. One quiz writer, Fox, believed the problem was worse in student bars. “At one bar it was old folks, and they didn't cheat. But the other student bar, yeah, definitely happened there. Either that, or people know way more about Chilean coastal geography than I thought they would.”

Jamie Green, a veteran host of pub quizzes at Dog With Two Tails says that he has rarely caught cheaters. “I've only ever had one confirmed cheater, they were caught by another team. I banned them for a month, and then gave them shit on the mic for another month. Of course more will be [cheating]. Not many, but you’d be silly to think otherwise.”

Professor Ronald Peeters, an expert on game theory and behavioural economics at the Otago Business School, expected high levels of cheating in the absence of enforcement. He said that: “a pub quiz is a game, which means game theory can provide insights. The game is a contest with one winner. Clearly all players (groups) prefer winning to losing. If cheating is a possible action, and is beneficial, all will do so, if they strive for winning the game.” So while perhaps morally wrong, it makes sense to cheat if there is no penalty to deter us.

Rather than being annoyed that another team was cheating, one pub quiz veteran, Lucy, said that “if I were to find out other people were cheating, I would probably be annoyed that we didn’t cheat — like, we may as well have.”

Even when Critic hosted a quiz online during lockdown, the host of the quiz, Elliot, suspected cheating was occurring. He said “we didn't have any prizes or stakes so we didn't care too much because if you cheated it would just mean it was less fun for you, although I'm a little bit skeptical, personally, at the few teams who got a near perfect score [out of 100 questions].” If people cheat without any prizes up for grabs, it is hardly surprising that cheating occurs when a bar tab is on the line.

Motivation for cheating can vary. One fourth-year student, Josh*, thinks that he would be more likely to cheat at some quizzes than others. He said, “it’s the quizzes that drag on for hours. The Baaa Bar one is really bad sometimes, it's fun being there and having a mean time but after about two hours you’re always a bit over it. No one wants to spend three hours working at something to come away empty handed. I’ve definitely considered just looking stuff up on my phone, for sure.”

Lucy also thought that the prize would affect her willingness to cheat. “But money for drinks would be a further incentive because it would be an immediate prize. I think the incentive to cheat would increase based on how much you want the prize.”

There will also always be a core of teams that will never cheat, even if it is technically in their best interests, Peeters said. “There is also a Behavioural Economics component. From that literature we know that there will also be a fraction of players or groups that will not cheat. Still, you should expect many cheaters.”

The suspicion that other teams are cheating can also have a huge impact on a quiz, especially if organisers do nothing to make it appear like they are policing the cheating. “When me and my mates occasionally went to the Starters quiz (rip), there was this one team that would be around the corner every week. Now maybe they were just regulars sitting in their usual spot, but that spot happened to be well out of sight of the MCs and the rest of the bar,” Josh said. “I’m not going to say they were cheating, but if they wanted to it would have been easy, and they won like every week. That can have a pretty demoralising effect on other teams.”

Peeters suggested several solutions to reduce cheating. First, you can change the method of answering by having a player come up on stage. Second, you could make the teams answer with buttons. Third, you could reward quicker answers which would make it harder to cheat, because looking up answers takes time. Fourth, you could simply police and punish cheating. Peeters prefers the later options. “The first two possibilities change the game substantially, with the risk that it may negatively affect participation (it may take the fun out of it). The other two seem feasible options. In the third option non-cheating is rewarded; though, cheating is not fully prevented. The threat of punishment will incentivise players not to cheat.”

Fox agreed that quiz design was important but he also thought that culture was an important way to prevent people from cheating, he said: “The best way to reduce cheating is to either make it impossible to cheat, or to make people not want to cheat. Because at the end of the day, even if you police cheating, the whole point is to avoid detection and people are going to do it if they want to do it. It's a cultural thing.”

Changing the culture of a quiz requires effort from the host of the quiz, Fox said: “You’ve got to shame people. I mean come on, cheating at a pub quiz? It's such an incredibly lame thing to do. That's the kind of message you have to get into people’s heads.”

Changing the design requires the questions to be better thought out, Fox said. “You can make it impossible [to cheat]. Usually the best way to do this is not by policing, because that just doesn't work, but by changing the type of question. Wordplay is impossible to Google, for example. Song audio, also impossible. Drawing rounds, stuff like that. Having people on stage like they used to do at Starters (rip) is great.”

In Dunedin student bars at the moment, pub quiz cheating is standard. Cheating is always a part of any competition that involves reward, even sometimes when it doesn’t. But when cheating reaches a level where it is widely tolerated and accepted by players, either the rules need to change to take account of the new norm or the cheating needs to be prevented.