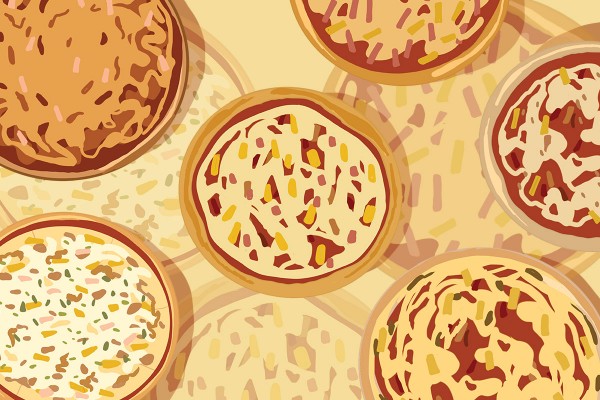 It’s about time that Critic did a pizza review. But how could we possibly judge the multitude of flavours, styles, and techniques that can be found in pizza? How can we best capture the rich tapestry of gastronomical history that pizza represents? These are all questions that we mulled over tirelessly before we started our rigorous analysis of Dunedin pizza.

We used three metrics for this review. Firstly, the value metric (cm2/$) tells you roughly how many square centimetres you can get for one dollar. The higher this number, the better value the pizza is. (For reference, a slice of Domino’s pizza is roughly 40cm2.) The second metric was taste and texture, averaged across all the staff members who contributed to this review. The third metric was vibes.

Sidenote: Unfortunately, Biggie’s, Filadelfio’s, and Slice of Heaven were not open when we did this review.

The pizza was well-cooked, with good, stringy mozzarella cheese and pineapple that melded with the cheese well. The ham was very meaty, which some staff thought was too much but others appreciated.

We agreed that there wasn’t enough sauce on this pizza. The base was also lacking. It had integrity and was decently thick, but it wasn’t nearly crispy enough. Hell’s Hawaiian pizza isn’t actually called a Hawaiian pizza, but is called “Greed” instead. This difference was apparent in the overall taste of the pizza. While the individual ingredients were yum, and the pizza was well-made, it felt like they were trying to create something different to a Hawaiian pizza. This wasn’t the right decision. Thinking you can improve on something perfect will always lead to failure.

Online ordering Domino’s sucks so much. You have to go past like ten different screens advertising delicious-looking sides in order to order one measly pizza. Yeah, you’re damn right I want garlic scrolls but I’m only here for one thing: Hawaiian pizza. Then you have to click through ads to enter random competitions from other companies? I am paying money for goods and services, surely that is enough for this giant corporation. What godforsaken capitalist hellhole are we living in where I have to click through multiple ads to pay for my humble pineapple on pizza?

The pizza itself provided a strong sense of nostalgia for primary school birthday parties, which some staff described as “consistent” and “comforting” and others said brought back less-than-fond memories. The sauce was quite sharp, tasting more like straight tomato paste than a sauce. The taste overall was barbecuey, and tasted a lot like a reheated supermarket pizza.

I have massive beef with Sal’s sign saying that they are the 22nd best pizza in the world. Not to be a skeptic, but I am willing to put my life’s savings on the fact that none of the top 50 pizza slices, or pizza places, are in New Zealand. If one of them were to be, it certainly wouldn’t be an overpriced pizza chain designed for Glasson’s girls to go on dates with Huffer boys at the end of their high school week before a trip to the mall.

To make matters worse, Sal’s doesn’t even have Hawaiian pizza on their menu. To create a Hawaiian pizza we had to order a plain cheese and add some ham and canned pineapple from the supermarket. We included that in our cost analysis. That being said, our improvised Sal’s Hawaiian pizza was pretty tasty. The best part about Sal’s is the sauce. It’s almost spicy, like a nice pasta sauce. There was also an impressive amount of cheese.

The office all agreed that the wood-fired flavour of the base was tasty, but we were divided on integrity. A few staff members reckoned it was easily foldable which meant you got way more cheesy goodness in each bite. Others said it was flimsy, slimy, or even flaccid. One said: “I’d be more comfortable holding a baby than this pizza.” The canned pineapples and the lack of bread to soak it up meant the pizza was incredibly juicy. More juicy than a pizza ever should be. One staff member reckoned it gave her a grease pimple. However, if you happen to be a fan of juicy pizza with minimal base, Sal’s is undeniably your best option.

Vibes: A single layer of lasagna falling apart in your hand

Pizza Hut was a very dough-forward pizza. It had a salty, bready, focaccia-like base and crust that honestly slapped. It was the antithesis to Sal’s, putting the base front and centre of the experience rather than hiding it in grease. Don’t get me wrong, the Pizza Hut pizza was greasy too. The sauce was pretty good, and the pineapple, ham, and cheese were all pretty inoffensive, with not much to complain about. One of the classic two multinational pizza conglomerates worldwide, Pizza Hut was unsurprisingly good value for money.

Vibes: Missing having a bakery in North Dunedin

Poppa’s was without a doubt the most visually appealing pizza from the get go. There were little crispy burnt bits of cheese and pineapple on top, and a sprinkling of herbs as well. Poppa’s took a different approach to most other pizzas. They layer ham across the entire pizza, and stack cheese and pineapple on top. A few staff weren’t a fan of the geologic strata approach, but most reckoned it made all the flavours merge together perfectly. The pizza had an almost sweet taste. In terms of texture, this pizza had excellent mouthfeel, with a good crunchy base. The ham looked like actual ham rather than something that came from a school canteen. Although Hawaiian definitely isn’t Poppa’s specialty, this pizza slapped.

Vibes: Using your new airfryer stoned for the first time and realising it was the best purchase you’ve ever made

Boss Pizza’s Hawaiian was like a pizza from Sims 2. The ham looked like mystery meat had been put through an industrial grinder, coming out as identical cubes of meat. There was a good amount of cheese and toppings, which was appreciated, but the cheese didn’t have any flavour and neither did the base. The whole pizza was a bit chewy and the overall impression was that the whole pizza felt like it came out of a Wattie’s can: the tomato sauce, the ham, everything. At least it wasn’t Bill English’s spaghetti pizza. Or maybe that would have been better.

The next day, we got an ad for Boss Pizza’s Hawaiian pizza on Instagram (Zuckerberg strikes again) but the image looked remarkably different to what we received. A quick reverse Google image search revealed the pizza photo was posted on First We Feast’s Twitter and was taken at an Australian pizza place that was decidedly not Boss Pizza.