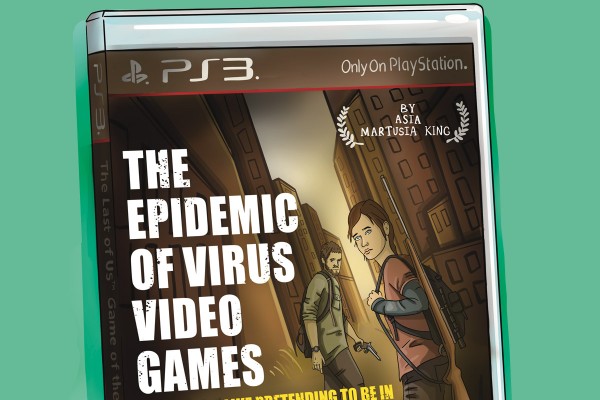 The Epidemic of Virus Video Games

Video games are a lovely form of escapism. You can forget about the worldwide pandemic and disappear into a virtual world for a few hours, before waking up pizza-stained and bleary-eyed in your mum’s basement again.

It’s an odd phenomenon, in that sense, to see how pandemic-themed video games have exploded in popularity since Covid-19 decided to piss in our collective cereal. Pandemic Inc., a game where players evolve a pathogen to wipe out humanity, became the bestselling app in China, South Korea, Japan, Italy and the USA within weeks of patient zero’s diagnosis. Similarly, grim and apocalyptic games began to regain popularity. In a time where time doesn’t exist, many of us have retreated to virtual worlds which mirror the terrifying one outside.

Why do we immerse ourselves in the very thing we seek to avoid? Critic donned its cat ear headsets and asked some gamers why.

Shannon, instead of making bread and doing yoga, spent both lockdowns playing the immensely depressing The Last of Us (TLOU) series. The Last of Us is set in post-apocalyptic America, plagued by zombie-like humans infected by a mutated strain of the cordyceps fungus.

While agreeing that video games are a form of escapism, Shannon explained that “the art in media that we most connect with are things that speak to our experiences. We hear about Covid in all of our news stories and there’s a certain point at which we get tired of it. Pandemic games are close enough to our current experience for us to find meaning, whilst still being different enough to not exhaust us in the way direct mentions of Covid do.”

One of Shannon’s summer school assignments leading into 2020 involved following a news story over 24 hours. She picked a report about a man who’d contracted a curious new disease in Wuhan. By the end of those 24 hours, the world had changed forever.

“It completely exploded in the same way TLOU starts. Like, ‘oh, it's fine, it’s just the people in the city, we’ll put them in hospital and figure this out.’ I was like, oh fuck. This is some relevant stuff. Obviously we’re not living in a zombie outbreak, but there were certain ingame things that were so close to real life. In TLOU, a lot of the set design, newspaper clippings and everything,  were ridiculously similar.”

These parallels gave TLOU a whole new meaning to Shannon. “The [fictionalised] government reacted almost exactly how it did in [real life] America, minus the militarisation. They were fully unprepared, fully willing to leave a bunch of people to die, not providing the way that they should for their remaining citizens. The fact it’s so predictable is kind of scary.”

Regardless, pandemic games are “comforting” to Shannon, and help her cope. “Games are a lot more actionable. In real life, all we can really do is get vaccinated, wear a mask, and stay at home. We can’t see the threat. It’s not a tangible thing that’s attacking us. It could be anywhere. In TLOU, it’s a physical entity. It’s a zombie that’ll attack you, but you can fight back and kill it. The danger, at least for the moment, is over. [In games], you can keep going about surviving.” And if you die in a video game, she added, you can simply try again.

Meanwhile: “in real life, when I go to the supermarket, I feel like I'm gonna have a panic attack. I can't headshot a panic attack. In game though, I can headshot the enemy from across the store. It turns an inactionable crisis situation into something I can defeat. Sitting inside having existential dread doesn’t make me feel cool.”

Shannon finds that the similarities make gaming “so much more personable”. For her, “it’s easy to see the characters reacting to situations and thinking: what would I do? That leap of imagination is so much smaller and easier to make. It’s easier now, more than ever, to immerse yourself.”

As to why she decided to play a plague-themed game in the midst of a pandemic, Shannon thought it “seems like the right time. A little bit of gallows humour, I guess. I’m in a plague, might as well go all in. It seems appropriate. Or inappropriate, depending on how you look at it. I don’t mean to be insensitive but there always seems to be a point in these world-changing events when you develop a sense of absurdity. It’s the human psyche. It’s how people carry on despite great tragedies. You build the tragedy into your culture, but also laugh about it, because what else are you gonna do?”

“Despite the characters being in this awful post-apocalyptic situation, the fact they are enduring and surviving, and not only doing that, but making fun jokes, having fun, is hopeful. Hopefully not me though, I wanna die. Like, yesterday.”

“In the current global situation, so much is out of our hands. We have to rely on other people adhering to their lockdowns, getting their vaccines, and the governments that are administering and distributing these vaccines. To dive into a pandemic based game where you have more control is a satisfying form of escapism. Ultimately things might get shit for a little bit, but it’s often working towards a happy ending.”

She is planning on replaying 999 again now that we understand more about Covid, and she can more easily separate fiction from lived reality. Both Cat and Shannon, having played 999 and TLOU before, know how the games end, and find comfort in being able to predict their emotional responses. “That stability is nice when you have no idea what you’re gonna be doing in a week,” Shannon concurred.

Shaun, another epic gamer, picked up a couple of similarly relevant games during lockdown. The first was Death Stranding. Death Stranding, set in a cataclysmic America infested by spectral creatures, requires you to deliver cargo to isolated colonies while the world is in lockdown.

“Suddenly, in the midst of our own kind of extinction event, the game really made sense,” Shaun said. “I remember getting sucked into it, playing it for hours and hours on end. I had plenty of time on my hands, after all. It's a cold, harsh space, but somehow comforting and gentle at the same time.”

“I remember when the flat would make quick stops to the supermarket, every single street was barren of any people. One had to keep their distance from any other folks around. On the face of it, [it was] an isolating experience, but after playing Death Stranding, I had hoped it would all change to a new normal. A united normal.”

On top of that, Death Stranding’s multiplayer function also brought Shaun a sense of human connection during isolation. When he first started playing, the Playstation was having issues connecting to the router, and so for the first third of the game he had none of the multiplayer functions.

“It wasn't until we fixed it when my game world was flooded with signs, structures, roads, ladders, and ropes. I was taken aback. I didn't realise how much I was missing out on simply not seeing what others were doing around me — how much they could help, and how alone I was until I saw everything else.”

Shaun’s noticed that Death Stranding has received overwhelming support on Steam as the pandemic progressed. “It would be strange to say the game was ahead of its time since it has only been a year between releases, and yet now, the novelty of connecting with others during a vast trek into the dangerous outside, discussions of isolation, masks, the disenfranchisement and division of once ‘great’ nations; they all hit just a little bit too close to home now.”

The second game Shaun played was Papers Please, in which you play as border security, eventually denying entrance to infected carriers during a polio outbreak. Some citizens have falsified vaccination cards. You must spot the discrepancies and detain any forgeries.

“Considering border security is a pretty big part of locking down, it made the whole ‘threat of people coming inside with fraudulent details’ really fucking spooky,” he said. “It's meant to be about the Berlin wall, but it has retroactively become Jacinda simulator.”

Other gamers agreed that they saw beloved video games in a new lens following the pandemic. The Fallout games, while not directly pandemic-related, are set in a post-apocalyptic world and affected Ceridwyn differently following covid.

“In Fallout, there's always something from the ‘old world’ that the people in the post-apocalypse elevate to a god level. So in Fallout New Vegas, they're like fuck yeah, Elvis, we're gonna make a gang about that. We did that with Ashley Bloomfield. We started a cult. If the world ended, people would think we venerated this science man as some sort of deity, and [they’d] better do that too.” Which, Ceridwyn added, she’s fine with.

Likewise, walking down the street in Level 4, Ceridwyn discovered a newfound respect for Todd Howard’s game direction. “In Bethesda games, when you see a skeleton and it's holding a teddy bear, you're like, ooh, dead baby, environmental storytelling. And it's heavy-handed and stupid. [But] that's like the crosses for lining up at the supermarket, and the stickers telling you where to sit in public, and the QR codes.”

It might appear morbid, on the surface, to play pandemic-themed video games amidst our own global outbreak. The reality is more nuanced than that. They have the power to tether us to control, stability, and human connection, in a time where we otherwise have none.

It’s comforting, in a sense. And we could all do with a bit of comforting right now.