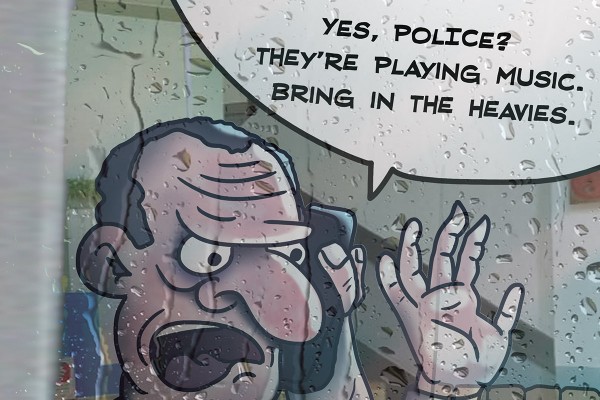 Is Noise Control Out of Control?

Picture this: you’re in your third year of uni. It’s the end of February and you’re fizzing for a year of 21sts, grad celebrations and general piss ups. You move into your new flat on George Street, with an outdoor area perfectly suited for gigs. For pres on your first night you fire up a UE Boom and have some chill drinks outside. By 9pm, there’s a noise control officer knocking on your door telling you to turn it down or your equipment will be confiscated. You glimpse the owner of a neighbouring motel smiling menacingly as you’re forced to take your speaker inside in shame.

Although there are rarely such intense confrontations, many students on George Street struggle to host even low-key celebrations because of the constant threat of noise control.

Imogen flats on George Street this year. She says that endless complaints from a neighbouring motel have had a huge impact on her flat. “It’s definitely called off a few events, first world problems eh. All the parties we’ve had we’ve had either get shut down really early or we’ve had to go inside. We’ve had a lot of 21sts and graduations that are worth celebrating and you just can’t.” Imogen’s flat is “never told who actually calls.” But given that their flat backs onto a motel, it’s not hard to guess where the complaints are coming from.

Noise control has been in conflict with students in Dunedin for as long as noise control has existed. But now, in a day and age where Dunners doesn’t have many bars which cater to students, the ability to host parties at flats is essential to the social lives of most students. In some areas, students are in constant conflict with neighbouring businesses over the level of noise they are allowed to produce.

Peter Finns, co-owner of 538 Great King Motel and President of the Otago Motels Association said, “there is a spectrum of guest reactions to noise disruption — some take it in their stride. Others may decide to take their business elsewhere. Repeat business and referrals are both extremely important to the motel sector and a reputation for being in a noisy neighbourhood will not help with either of those two things.” Motels, of course, rely on a reasonable degree of peace and quiet for the comfort of their guests, but having a motel close to the parties of North Dunedin is not always bad for business.

The University estimated that in 2019, it brought $2 billion to the local economy. Motels take their share of this wealth by providing accommodation to the many professionals, parents, and friends that visit the University.

Student culture in Dunedin also increases the pull of the University. By taking customers but incessantly policing noise complaints, some moteliers are seeking to reap the economic benefits of the student area in North Dunedin without accepting some of its drawbacks.

Imogen struggles to count the large number of noise complaints made against her flat. “I know that we’ve got nine or ten of the sheets [of paper] but they’ve definitely come over a bit more than that. Sometimes they just come over and talk to us without giving us the piece of paper.” Imogen understands the motel’s position, but still thinks that her flat should have some rights to have gatherings without harassment from noise control.

According to an Otago Professor, “the RMA sets a general duty on everyone to avoid making 'unreasonable noise' — and that's a flexible standard depending on the local context and any 'sensitivities' in the surrounding area.” However, in Dunedin, the council has mandated different noise levels depending on the zoning of a property.

Most student areas close to the Uni are zoned as Inner City Residential which means that the allowable noise level is higher than in suburban or residential areas. The noise level is measured at the boundary of a property, which usually means that a noise control officer will stand on the road with a microphone to measure the noise. But according to the Council’s District Plan, the measurement can be taken from any boundary with another property in the same zone.

Another student, Tim*, who lived in a flat near a motel last year was constantly harassed by noise control. His flat had noise control called on a Saturday afternoon because he “had a small gathering out back and was listening to DnB on a regular UE Boom.” He described the incident as “bullshit”. There are also no consequences for calling noise control, as the process is anonymous for the person complaining. Motels can basically call noise control on speed dial whenever they hear the slightest sound.

Finns, from the Otago Motels Association, said motels will only call noise control if they have to. “None of our members want to close down parties just for the sake of it and stop their student neighbours from enjoying themselves.” Most moteliers maintain good relationships with their neighbours, but the few that don’t wield substantial power over their neighbours.

In Tim’s situation, there was a total breakdown in the relationship between his flat and the motel which resulted in the motel abusing the noise control system. He said “I don’t think in that situation they were receiving complaints from guests or anything. We weren’t disturbing them, they were just doing it because they didn’t like us.”

Because the District Plan states a blanket level of acceptable noise, no one within the zone (including moteliers) can claim that they have special requirements for low noise. But this is also a double-edged sword because it means that any noise that exceeds the limit is deemed to be unreasonable regardless of the context. In Tim’s situation, even if the noise wasn’t enough to bother anyone, if it exceeded 55 decibels at any boundary, the noise control officer could issue a notice.

The DCC encourages those having a party likely to exceed the noise limit to “let their neighbours know — talk to them early, tell them a finish time and perhaps give them a contact cell phone number.” However, Imogen has had little success with this approach. “We warned all the motels before too, every time we go around everyone and tell them we’re having a party, but we still get shut down at ten.” She doesn’t really see any easy solution, but reckons it can be resolved through better communication. “Like come over and have a beer or something.”

Imogen believes some songs particularly trigger motel owners. “We shouldn’t have played Basshunter. We played that one Basshunter song and we got noise control pretty quickly after that,” she reckons. But she thinks “it’s getting quite ridiculous,” and the complaints are getting to the point where the motel is calling noise control when they even suspect a gathering might be occurring.

Noise control provides a valuable service to much of the community in Dunedin. But motels near the Uni overuse the rights they have been given under the RMA. There is currently nothing neighbouring flats can do to prevent harassment from noise control officers over trivial complaints.