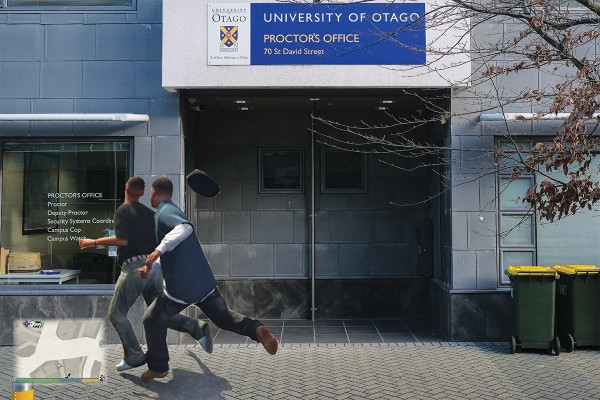 Do you live in a society that places unhealthy and unrealistic expectations of masculinity upon you? Are you torn between the increasing pressure to be emotionally articulate and in touch with your feelings, in a context where men are only valued for their achievements and ability to assert dominance over others? Maybe you’re a woman trying to find a way through a misogynistic world by making patriarchal conditioning work for you? Anyways, whatever your situation, we’ve got you covered with a guide to the premium places to Super Smash Bros your enemies on campus.

Consider this your training stage. In order to fight on campus, you need to know how to fight the campus. And there’s no better place than the more-than-human-sized statues between Richardson and Mellor labs. These provide an excellent combat simulation, with many different attackers at most possible vantage points to help build your quick wits and flexibility. However, the statues’ ability to train your punching strength is limited unless you’re willing to scream out in pain and head to the ED with a fractured fist. Specific attack moves include using proper protective equipment (helmet, shin guards, knee guards, elbow guards, and wrist guards), kick flips, and concussion.

Audience — 2/10 (others may walk past with funny looks)

Table Tennis Tables in The Link

This is the only place on campus where any form of physical activity is actively endorsed. The equipment on offer, ping-pong paddles, can be a deadly melee tool or a long-range weapon, if a game doesn’t go in your favour. The table offers a stage for the champion. You can find refreshing sustenance in the vending machines, and there is seating all around for observers. Specific attack moves include ping-pong balling people from afar and net-slingshotting, where you use the table nets as a slingshot for massive objects or a high volume of balls.

The lawn is a very tranquil location under the shade of the trees and protection of mother nature. You can climb a tree for a bird’s eye view of your attackers or as an escape route. Any attack will be witnessed by a flock of nesting birds, chirping their chants, insults, and avian TAB bets on human competition. The Bills will either support you or attack you, adding an element of chaos to the mix.

Depending on precipitation, mud wrestling can be a viable option given its high damage per second and likelihood of slipping. Other attack moves include normal wrestling, double footing, and egging from above.

Attack advantage — 3/10 (use the trees to your advantage)

There’s a high likelihood that this is a fresher fight, located at the heart of health sci and 100-level papers. Anyone older than third year should not be present in any combat situation. There’s enough open space, incline, and obstacles to make for a challenging fight, but any form of combat will rely on brute force more than any strategy. Significant boosts of energy, outside of ATP and calcium binding to your actin and myosin, are unlikely. Specific attack moves include stealing your opponent’s notes and using the phrase “you’re not getting into med.”

Top of The Clocktower

The trick here is to start at exactly 12pm for vibrative and auditory assistance from the soothing boings of the Great Bell. Your fight will be visible for all in Dunedin to witness with binoculars or satellite imagery. But the elevation means that wind resistance, low atmospheric temperature and hypoxia risk may inhibit performance. An excellent method for a quick resolution involves grabbing your opponents’ belt and throwing them out of the combat area, like in Sumo. Other specific attack moves include parachuting and using the hour hand of the clock itself as a melee weapon.

You can splash your opponent with water. That being said, the Leith might have contamination issues that limits human activity, and I don’t think anyone really wants to know how much Lime battery juice is still lingering around. Splashing your opponent might violate the Chemical Weapons (Prohibition) Act 1996 if water contact occurs. If you stay in the water for long enough, some fish might help you out. But the likelihood of that is lower than the likelihood that E. coli in the water will give you gastro or a UTI. Specific attack moves include motorboating, fishhooking, and throwing down a Neuron from the bridge.

An excellent place to witness the Proctor in action against student misconduct. It’s cosy and efficient, making it excellent for close-up unarmed combat. This also means that any conflict, both verbal and physical, will be resolved with an iron fist. The proctor himself, with his Proctorial Justice League and security cameras, can record everything accurately for slo-mo replays. He can raise the stakes of any fight, with a thorough investigation and potential exclusion from the Uni. Specific attack moves include headbutting, apologising, and packing your bags.