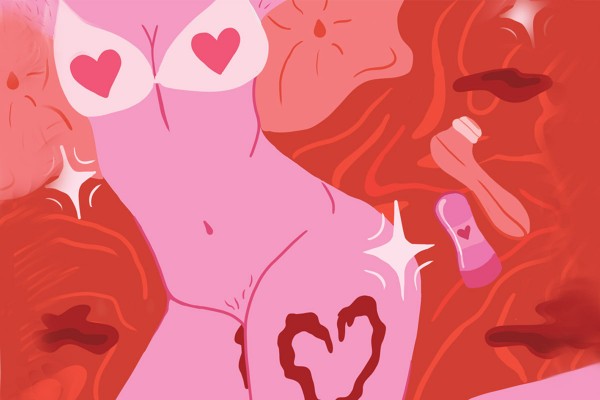 There Will Be Blood: The good, the bad, and the messy of period sex

Most humans swap a lot of bodily fluids to show that we’re attracted to each other, but for some reason we don’t put period blood in that category. There’s a longstanding belief that periods are unclean or gross, with no evidence to back that up. And contrary to what a lot of people who’ve never had to deal with blood dripping out their cervix believe, periods are generally not an overwhelming torrent of blood that makes sex look like a scene from a horror movie.

April said she never planned on having period sex, but “I started talking to this guy who said that he was learning how to play John Mayer songs. And my ass was already sold on this guy because anyone who knows me, knows I am weak for musicians.”

“We started heading back to mine and I thought “fuck I’m on my period”. But I was horny so logic was out of the window,” she said. “I stared at him dead in the eyes and said ‘I’m on my period.’ And he’s like ‘I don’t care.’” They ended up having sex on the carpet because April was not keen to ruin her fancy sheets. “Fuck my life the sex was good,” she said. “The guy didn’t care that I was on my period, and then another person I had period sex with didn’t care either. It was mostly me worried about the mess,” she said.

Everyone who spoke to Critic Te Arohi said that the taboo around period sex seemed like a big deal at first, but their sexual partners didn’t actually seem to care about the blood. “There is that massive stigma around periods being gross and even if I don't find them gross I'll worry that others will,” said Christina.

“Period sex was an accident at first,” said Mel. “I felt uncomfy about it, like I felt dirty and like my partner didn’t want me. But then his fingers had blood on them and I was turned on so we just continued.” Mel said she was surprised but “it was good sex and not as messy as I thought”.

Jennifer reckons the taboo around period sex is a “self-conscious thing”. “If Bella [her girlfriend] is on her period, I’m like cool whatever. And if I’m on my period, she’s like cool whatever. But personally you’re like oh my god I’m so sorry, I’m so gross right now, it’s fine if you don’t want to.”

“If your partner’s not cool with it, I get it, but also it’s blood. Wombs are beautiful things and you wouldn’t be alive without one, so maybe suck it up,” said Jennifer. “My thought is if a guy is not okay with it, they should really work on that. She has to deal with that for a week out of every cycle. The least you can do is not be gross and weird about it,” said Bella.

“I don’t remember ever thinking ‘woohoo let’s have some period sex’ but it just happens, that’s real life,” said Danya. “Sometimes my period goes for over a week and it can be spotty and light at times. The sex is not even messy when it’s like that.”

For Jennifer and Bella, period sex just becomes a necessity. “When your periods are not in sync, you get kind of fed up,” Jennifer said. “If you avoid periods you can only have sex for like half the month. At that point I’m cranky, I wanna get it off, so let’s go ahead and do it.”

Christina said she was worried the first time she had sex on her period. “I was very nervous about how much blood there would be so we put down a towel which was good because it got everywhere, on my legs, on his stomach, on his pubes,” she said. “Years later, now I don't care at all, with my boyfriend.”

“You need a towel, but most of the time it's not as messy as my first time and there isn't much mess at all,” she said. Mel reckoned the best strategy was to do it in the shower. “That way there’s literally no clean up required.”

Jennifer said “it’s not gonna look like Carrie, it’s not as scary as you think. We’ve usually done it at the very beginning or the very end, never when we’ve been like peak gush.” Bella said “I can think of maybe one instance where we could see any blood.”

For all the bodily fluids exchanged during period sex, there’s still room for creativity. “In my current relationship, my boyfriend drew a heart on my leg in my period blood,” Christina said. Romance is not dead.