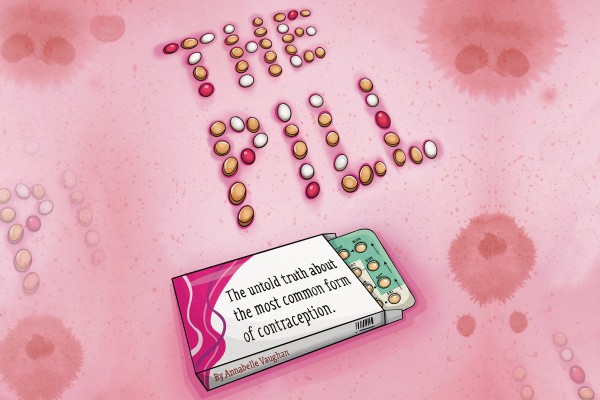 The Pill: The untold truth about the most common form of contraception

Anxiety, depression, migraines, nausea and weight gain are just a few of the side effects which your body is susceptible to on the oral contraceptive pill. Colloquially known as the pill, the oral contraceptive is one of the most commonly prescribed forms of birth control. It can be used for a range of purposes, such as to help control acne, mood, and periods, as well as being a contraceptive. It is one of the most common forms of birth control in New Zealand and Australia. Despite being incredibly common and normalised within society, the pill carries a variety of harmful side effects, many of which are not talked about.

Beth first went on birth control in 2017 to combat her acne. Despite trying a series of different pills, she had a negative experience on all of them. “I was on Ginet, and it cleared up my skin but I got massive migraines from it,” she says. Although her doctor knew this, they still prescribed it to her. After having migraines, she switched to a different pill. “It stopped me from getting my period for a bit, but then I got my period every single day,” she said. “I never went a day without wearing any sanitary products for four months. When I went to go see my doctor I was like ‘this isn’t working’ and they were like, well damn.”

Alongside having a continuous period, Beth also experienced a variety of mood swings and emotional upheavals. “I had really bad mood swings. I was bleeding everyday, and out of no-where I’d be like, ‘I wanna kill myself’ for like an hour, and then I’d be fine.” When Beth finally came off the pill, she realised how badly it had affected her in a variety of ways. “I had been on it for so long, it was the first time I hadn’t been on the pill in so many years. I just thought this is how it is then I realised that no, that was the pill and its awful side effects,” she said. “I’d rather have a heavy period than deal with these awful side effects.”

Like Beth, Anna initially went on the pill at 16 for hormonal reasons. Quickly, she began experiencing similar side effects. “I first went on the pill when I was 16 for hormonal reasons, like to clear up my skin. The pill I was on [Ginet] was really hormonal. There’s more hormones in it and it affects your mood, but they don’t tell you that,” says Anna. “It builds up in your system, so it’s like with every cycle you get moodier and moodier in terms of PMS.”

Anna says that being on the pill caused her to struggle during her first year of university, and suffer from social anxiety which she had never had before. Despite this, she thought that her feelings were a side effect of homesickness and adjusting to a new environment, rather than the medication she was being prescribed. “When I was about 18 and 19 it was pretty bad. The social anxiety was the worst part of it. My first year was particularly bad. I’d feel anxious with things like going to the dining room, it made me cry a lot more. [In a college] you feel homesick, but I think for me it went on for longer than was normal,” she said.

“I’ve always been an independent person but I felt like when I was on the pill I was relying on other people a lot more,” she said. “I know when I look back. At the time I thought it was normal, but it’s not. I realised when I stopped taking it that it was giving me a lot of anxiety.”

Alongside feeling emotionally drained due to the pill, Anna said she also began to get high blood pressure which she says was “the main reason I stopped taking it.” Anna says that when she was prescribed the pill, her doctors didn’t warn her of the potential side effects. Although they made sure to monitor her blood pressure, there was no acknowledgement of the mental and emotional side of things. “They didn’t go into a lot of details or side effects, they don’t tell you anything like ‘this will make you moodier,’ I think you don’t realise at the time a lot of the emotional side effects,” she says

Anna also found that coming off the pill was difficult. “It’s fucking awful. Your body thinks you’ve been pregnant so you get sensitive boobs for like three months. The hormones were suddenly there then they were not. I was pretty up and down during that time.”

Just like Anna and Beth, Jamie went on the pill when she was 16 and has been on and off it intermittently. “The first time I used it was fine. I was taking it for my period, because I would get the most awful cramps to the point I couldn’t go to school. But it didn't stop my period,” she says. Like Beth, Jamie moved onto the pill to see if it would work to combat her painful periods. Initially Jamie asked her doctor about the depo shot, an injection based form of birth control which suppresses ovulation. However, Jamie was advised to try the mini pill, as it’s “the same hormones and chemicals” as the shot.

“The mini pill made me insanely depressed. I had struggled with mental health before, but this was to a whole new level,” she says. Initially, Jamie put her struggles down to university stress, not realising it was the pill. “I thought it’s my third year of uni, I must be tired and exhausted,” she said. Things got so bad for Jamie, even something as simple as doing the dishes or cleaning her room became a daunting task.  “When I was really depressed it was awful because I was an awful flatmate. Even though my flatmates were so good about it, it put a lot more stress on me, and it was such a bad cycle,” she says.

When Jamie started coming off it, she says she felt “a million times better… It ended up not stopping my period so I went off it because there was no point. But I haven’t been back to the doctor because I’m so tired of trying to find something that will work when I know it’s fucked with my mental health so much,” she says.

The pill is often seen as the first and only type of birth control available to women. However, it doesn’t always work for everyone, and can sometimes not be worth the trouble. “There should be a lot more attention towards it. It can be really throwaway,” says Beth. “[The doctors] were immediately like, ‘just go on birth control,’ instead of exploring other options,” she says. “My appointments were always five minutes long, I was never told I could have a straight period for six months. The pill has so many side effects, and it’s not okay.”

Anna agrees. “It’s not taken that seriously, it’s weird because when you’re on it, you’re like ‘this must just be how I am,’” she says. “The pill is seen as the form of contraception for women, it’s what you think of when you think of contraception. But there are better alternatives. While [the pill] is an option, it’s not the only option,” she says.

“I feel like it’s seen as a cure-all even though it can mess with you so much. For some people it’s helpful, but it’s really risky for other people,” says Jamie. Jamie also thinks that there should be more normalisation and discussion around the side effects of the pill, including needing to take time off due to menstruating. “There should be more discussion of the other aspects of talking about your menstrual cycle. It should be normal, like taking time off school, you shouldn’t have to take pills for this one week.”