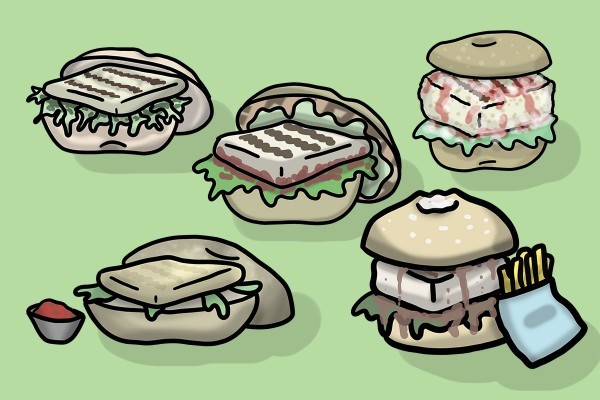 If you’ve ever met a vegetarian you’ve heard about halloumi. It’s a thick, grillable cheese that you imagine fairies using as a trampoline. The popularity of halloumi, along with Dunedin’s inexplicably thriving bagel scene has provided us with several variants of the halloumi bagel.

They’re all delicious, but some are better than others. Critic [Ed: a single critic employee with controversial halloumi bagel opinions] ate a halloumi bagel every day of the week to find out which one deserved the title of “Big Cheese”.

Kiki is a contrarian. As you can tell by the alt-core crowd they hire to staff the cafe, nothing here is quite in the mainstream, and while they’ve gotten on board the halloumi bagel trend, Kiki has taken steps to make sure you’re well aware that they’re “not like other bagels.”

The salad and spreads are completely different to anywhere else on this list. Instead of lettuce, I got a finely shredded beetroot assemblage, which was incredibly tasty, and some greens that weren’t iceberg lettuce. Kiki also bucked the chili jam fad and served pesto instead.

I’ve ordered it more than once, mostly through fruber, and they’re very consistent with the amount of halloumi you get and the thickness of the cut. It’s a nice cut, but nowhere thick enough to clog your arterial system like I’d prefer.

Students sleep on the Museum Cafe. It’s right next to campus, reasonably priced, and its clientele are the type of people who enjoy publicly-available science, so they have to have a good menu. This is evident in their slicing of the Halloumi.

If there was a Whopper™ of Halloumi Bagels, this would be it. They served me a slice of Halloumi thick enough to choke on, maybe a solid half inch thick. I could have played shuffleboard with it. It’s also the only place that battered their halloumi in a crispy cajun crust, which earned them major points.

Their bagel and salad were decent, but not nearly as high-brow as their cheese. I only saw iceberg lettuce, and the bagel itself wasn’t anything to write home about. They did give me both aioli and chili jam though, which was a nice touch.

Hussey and Laredo used to be my #1, but somewhere along the line, they changed their halloumi bagel and it really fucked with me. The current version of their timeless classic, in my opinion, is just not as good, and the slices were a bit thin. Shoutout to the one guy that always toasts it perfectly, he’s got frosted tips or something. Keep an eye out.

The bagel itself is great, and you can watch them take it out of the water it's stored in before toasting it, sort of like when Neo comes out of the Matrix, or a reverse baptism. Unfortunately the salad is only iceberg lettuce, but I understand that they are a bit limited for space inside that caravan.

The spreads are where it’s at, though. Chili jam is made in-house (in-caravan?) and depending on the day, can be burning hot or totally mild, which are fun odds to play. The hack, though is to get the avocado bagel and add halloumi and chili jam. Highly recommended because for a few dollars, this bagel goes from average to excellent.

This counts, right? The Nando’s halloumi bagel serves thick-ish slices of halloumi, but plenty of them. The greens aren’t notable by any means, but Nandos is saved, as always, by its sauces.

Not only can you get any spice level that you want, but the sauce that comes standard with the meal absolutely slaps. Life hack: Get a bunch of Nando’s sauce and add it to other Halloumi bagels for a full experience.

The bagel itself was more like a burger bun, which may have been because it was a burger bun. I punched a hole through the middle with my finger to justify this purchase being included in the review. It was the only bagel to come with chips.

Beam Me Up Bagels #5

Honestly, every time I have this, it’s still disappointing. There’s something about the pesto that I just don’t like, the halloumi is never toasted enough, and the greens are barely even there. While there may not be anything remarkable about the two halloumi bagels on their menu, the sheer variety of available toppings means that there’s something for anyone.

Just like every other place on this list, you can substitute meat for halloumi on pretty much every item on their menu. The possibilities are endless. Their stock-standard halloumi bagels didn’t make me feel any type of way, but that might be because I’ve been eating them for years now, and knew what to expect.

Chili jam was great, definitely could have done with more salads. I don’t eat greens in my day-to-day, so I rely entirely on Beam Me Up for my vitamins and minerals, and I don’t think they know that because at this rate I’m going to catch scurvy.