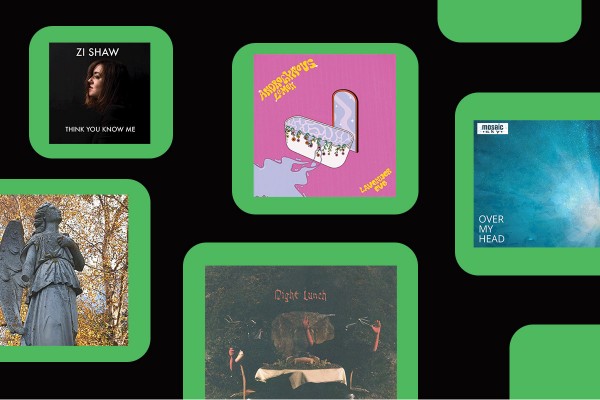 Small Fish In A Big Stream: Local Artists On the Problem With Spotify

Statistics New Zealand thinks the average Kiwi household spends $29.40 per week on “alcoholic beverages, tobacco and illicit drugs”. Even at this ridiculously low-balled estimate, Spotify’s own figures show just 2.6% of their 7 million musicians made enough money in a year to pay for these essentials of daily living — about $1,500.

When rock ‘n roll can’t even buy you sex, drugs or booze, you know something’s seriously fucked up.

For Radio One chart-toppers Night Lunch, being on a streaming service was vital, as “the default way people listen to music.” However, despite being on all the major streaming platforms, they haven’t exactly been raking in big bucks: “for us, a small band, we haven't made back what it cost to be distributed to streaming platforms.”

Most other local artists we spoke to found that making money on a streaming service was pretty much impossible. Matt, from Dunedin avant-rock group Mosaic Sky, says: “We're treating it as exposure rather than any serious income generation.” Boaz, from local vintage pop-rock band BO And the Constrictors, agrees: “You’ve really got to be hitting millions of plays to be getting some sort of income back where it’s kind of worth all the work you put in.”

The way streaming services pay artists is complex. On average, Spotify and Apple Music pay out 75% of what they make from subscriptions and ads to record companies, music publishers and songwriters. If DIY is in your DNA, like most indie artists, this 75% or so goes straight to you. This money is divided based on “streamshare,” basically how many streams your music gets compared to the total. For example, if Spotify had 100 streams in 2020 and 99 were breathas blasting Macky Gee’s “Tour,” this would be 99% streamshare. Macky Gee and Elevate Records would then get 99% of 75% of what Spotify made in 2020.

The end result, though, is still poverty pay for most artists. For Spotify, this works out to around 0.75c every time you stream a song, and maybe 1.5c for Apple Music. Even these tiny numbers can be affected by factors such as whether you want your music to appear more often on Autoplay/Shuffle Play, whether your listeners pay or not, and where your listeners are located. “These amounts are clearly too low to be sustainable for emerging artists,” say Wellington group Androgynous Lemon.

In response to Critic Te Arohi’s questions, Spotify directed us to a slick website, Loud & Clear, which “aims to share useful resources about the streaming industry”. They say: “Our model drives more fan engagement and generates revenue from more places — that means larger total cheques from Spotify to rights holders.” Spotify claim having lots of listeners in developing countries and having Spotify Free (which both make them less money) affects their per-stream rates, but that without Spotify, this money wouldn’t go to musicians at all, because most of these listeners wouldn’t pay for music anyway. Apple Music didn’t respond to our requests for comment.

Being able to upload your music and instantly reach hundreds of millions of worldwide listeners makes streaming platforms a powerful promotional tool. However, with each listener having around 7 million musicians to choose from, finding new music is often dictated by algorithms. Like those on Instagram and TikTok, the algorithms are designed to recommend stuff you like. Even with everything from British grime to Malaysian dad-rock and Kiwi soul available on Spotify, chances are that unless you already like that stuff, you’ll never see them in your playlists.

Singer-songwriter Zi Shaw says this is a bit of a shame. “Prior to streaming, I think we had a lot more diversity in the music charts. Now it all kind of blurs into one top twenty for the whole western world. It affects radio, too. And then it goes in a circle. I'm constantly recommended the same bands, and when I look at national top charts, it's all the same songs. For smaller artists it's not easy to be recommended to new fans, or to end up on Spotify playlists.”

Androgynous Lemon say that the algorithms are a problem. “With platforms such as Spotify being so dominated by both automatically and industry generated playlists it often feels like you’re flying under the radar, and not in the fun way. That said, playlists like Hatchlings, Release Radar, and other New Zealand specific recent release playlists are a godsend.”

In response, Spotify claims they are “lowering barriers to entry and democratising access to audio for listeners. Artists no longer need big budgets to create, distribute, and amplify their music around the world. In 2020, over 76,000 artists were added to Spotify playlists for the first time, the large majority of which were discovered through our playlist pitching tool, which is freely available to all artists.”

Local artists also worry about Spotify’s effect on their main source of revenue: Live shows. Zi says that “money is made from ticket sales and not people buying your music. Problem is, if you're a small time artist, why would anyone pay to see you live? They can already listen to you entirely for free via streaming.”

With students not exactly flush in cash either, artists increasingly end up performing for free. Although it’s great to get the buzz of a live performance, there are other expenses. “I need gear. Or things need fixing. And I got to get to the venue. And sometimes you gotta pay the venue, like the “deposits” for Starters Bar and Dive Bar, although you keep any money you get from tickets. I'm not getting money for all the hours where I could be working, or I'm not working because I'm doing a gig.”

For Zi, it’s not really about making bank, but just being able to keep making music. Recording costs money too. “Either you've bought all the recording gear or you're hiring a studio and paying someone to mix and master. You're spending money to make music and are unlikely to make any money back.”

So, what’s a broke student to do? Bandcamp was a top suggestion for online music, where instead of paying a set price to download music, you pay what you want. Night Lunch says they’ve “made more money from that than any streaming revenue.” Androgynous Lemon said that on Bandcamp, “even paying $2.00 means we get more than twice the return we’d get off Spotify, and that lets us record more music and play more and better gigs.” If you’re stuck on streaming, at least make sure you’re paying. Artists make more money per stream that way, and most services have student discounts as well (Spotify and Apple Music charge $7.50 per month for students).

Another way to support is to get your local business to purchase a OneMusic license. Whether they’re playing the radio, Spotify or good old-fashioned CDs and cassette tapes, it’s actually a legal requirement under the Copyright Act because music is usually only sold and distributed for private use. The upside is that this money goes to APRA AMCOS (aka the organisation who run the Silver Scroll Awards) and Recorded Music NZ, who represent songwriters, music publishers, record companies and artists. Ultimately, APRA AMCOS says 87% of that cash goes back to musos.

Artists agreed on the most important thing: if you love musos, get out and see them live. Even with their music available everywhere, Night Lunch “ultimately see themselves as a live band.” Gigs make artists the most money, and more importantly, it’s bloody good fun.

“Live shows is where it’s at — that’s definitely the best way to support your local artists, going out to the shows and having fun with your friends. You listen to the songs on Spotify to get excited to go out to the show,” says Boaz.

“Support your muso friends (and local artists and venues!) buy their merch, share their stuff, stream them in the background, buy their music on Bandcamp, pay $5 to see their gig. Feed them Creme Eggs,” says Zi. “Venues will stop having live music if it doesn't make money and they can't afford to pay bands. Bands will stop having bands if venues can't afford to pay bands.”