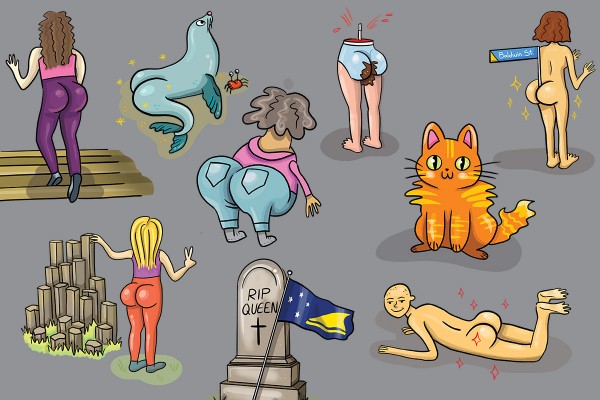 Baldwin Street: A Journey to Thickness (in the Heart and Soul)

Ah Baldwin Street, a Dunedin icon and the disputed steepest street in the world.

Upon recently turning 21, I asked myself a bunch of questions, as any true Pisces would. Who am I and what am I doing? What is life? And am I making the most of it? Most importantly, how can I get triple caked up?

Motivated by the threat of time, I decided to embark on an experiment in the hopes of answering these questions. I took my taro legs and trotted up Baldwin St for 30 days. Some of them were in a row, but most of them weren’t, I’m not gonna fake the facts for content.

I live in North East Valley and my flat is about two kilometres from Baldwin Street. I ran to and from Baldy every morning, and by run I mean jog, and by jog I mean power walk at a pace slightly above that with which you walk when you’re heading to the bathroom about to pee your pants, if that makes any sense.

I am not an athlete — in fact I’m nothing of the sorts, although I was a benchwarmer in my premier high school netball team, which won the secondary school nationals when I was in year 13. It’s my only claim to athletic fame, and I have the gold medal to show for it, so there’s that.

B-day sweat is on. I forgot how much running in the morning makes my guts go brrrrr. Would strongly recommend pooping BEFORE exercising.

As I began my ascension it was immediately clear that I had not drunk enough water beforehand. My vision went spotty a couple times, not gonna lie. You know the moments before you pass out when you blink and blink, but every time you open your eyes, all you continue to see in front of you is darkness? Yeah, my brain said ‘bing bong I wanna SLEEP’. I made a mandatory stop at the bench about ¾ of the way up. Otherwise I certainly would have passed TF out. My b-day treat to myself was taking it easy.

Song of the day: Never Ending by Rihanna

The afternoon prior to this, the Critic crew had fish ‘n chip review (yum) and I also had b-day dinner, at which I ate copious amounts of cake. I was hoping the cake would magically migrate to my cake, but it only made my stomach feel sticky icky. I called my dad halfway up Baldy before he went into hip replacement surgery because #arthritis. A little brown lady walking down said good morning to me. She was super cute and wore an iconic pink zip up jacket. You hoes could never.

For some reason unbeknownst to me, I had this impending feeling of doom while I descended. I ran home, had a shower, and then had to meditate for ten minutes to try to calm myself down. I returned to reality in a cold sweat, then had to sprint to make it to my 9am on time.

Energy: Freak the freak out

The Dunedin winter chill is now upon us, and the air is getting colder and crisper by the day. I had to slow down to a walk a few times to change the songs coming through my earphones, but if I’m being honest the real reason I slowed down a few times was because I was fatigued.

I saw the little brown lady from the other day. We chatted for 15 minutes at the ¾ bench, she gave me her number and address and invited me to visit her whenever I have time. She talked about God and stuff, I can’t tell if she knows that idk God. I’m gonna cherish this unexpected friendship regardless.

Saw my Tokelauan queen once again, this time at the bottom of the street. She invited me over again, I’m going to have to take her up on this offer one day soon. Every time I see her she talks about how she wants to go home to Tokelau to die peacefully, but because of Covid that’s looking unlikely. She seems very accepting of the idea of death and that it will become her soon. Love that for her.

Song OTD: Come Get Her by Rae Sremmurd

Petted a kitty at the bottom of Baldwin for a solid five minutes. It had me feeling like I was chosen or some shit. It was spiritual. I really needed that.

It’s cloudy and dark as fuck outside. I’m loving it and hating it. It makes me scared, but it also means that people won’t see me struggling to breathe. Going up the stairs instead of walking on the road is an absolute game changer, friends. Even though the steps are quite shallow, it makes the ascension much easier and you’ll find you’re up there in no time.

My Tokelauan queen keeps trying to convert me to Christianity when I see her at Baldwin, as I did today. Sorry sis, but I’m truly NOT the one. She said that I need Jesus, maybe she’s right and I’ll finally get cuffed up or something if I seek a higher power, idk.

Okay, at this point it was getting a bit repetitive so I HAD to switch it up a bit. I swapped the urban hill of Baldwin for the Organ Pipes and Mount Cargill this fine morning. The first five minutes were an absolute uphill hell, but after that, the climb was simple. I went alone as I always do, to truly #findmyself, and scrambled up (then back down) the basalt columns of the Organ Pipes.

I fully accepted that if I fell or slipped, it would be over for me. I recorded my descent from the Organ Pipes as evidence of my last moments for in case I did actually cark it. If you want the footage, hit me up. I made it to Mount Cargill, and also climbed up Butters Peak, both of which were iconic.

Trekked out to the pyramids at Okia reserve this fine morning instead of our classic Baldwin. They were not the same pyramids my guy Mr Ocean was talking about, but best believe I had that song playing in my mind the whole time. This was the best walk I’ve been on in a while.

The pyramids are formed by clusters of basalt columns, and in the morning they look so stunning. You can even climb up the smaller one, so that’s exactly what I did, and the views from the top of it were definitely worth it. I walked about 30 minutes further and landed at a beach with no other humans in sight. It was fucking spectacular. Walked along to the end of the beach where a cliff meets the ocean, and chilled out with four sea lion friends.

Other friends I observed along this excursion beach included a couple of crabs, some sheep, highland cows (the fluffy ones!), and a variety of birbs, including seagulls, pūkeko, and pīwakawaka.

Energy: Give me a pole to climb or something idk

Did the Pineapple Track this day. It rocked my shit something vicious man. I, once again, almost shat my undies and that’s not even an exaggeration. Hills just really activate my guts I guess. The views are spectacular once you make it through the bush though! I was absolutely dripping in sweat on this walk. If you have asthma, take your inhaler because you will undoubtedly need it.

Monday morning sweat time! Daylight savings be making it real light outside early in the morning, which is both good and bad. Good, because it makes everything more visible, and bad also because it makes everything more visible. Sorry to these people I’m running past on the street, I know I be looking a damn mess, but at this point I do not give one fuck. Simply avert your eyes, pals. I walked backwards up Baldy for about half of it, great for the quads. Petted a kitty again, it has a suspiciously short tail. I wonder what happened to kitty. Maybe she’s born with it, maybe it’s Maybelline.

Final day of this self-directed experiment thing. I can now run (actually run) all the way there and back and walk all the way up Baldy without any breaks. The growth is amazing! Straight up feeling #proud that I set myself a challenge and committed. My legs are dense as heck now, no lies. Feeling like a beast, if the beast was a hippopotamus.

Thanks for journeying with me, everyone. To be honest there haven’t been many changes in my ass. If anything, now I just have a long back, no booty in sight, so that’s cool. In regards to my other questions, I still have no idea what’s going on. But maybe that IS the answer to all those questions — just keep on living in the hopes that you’ll one day find the answers. That’s what I’ll keep telling myself anyways.