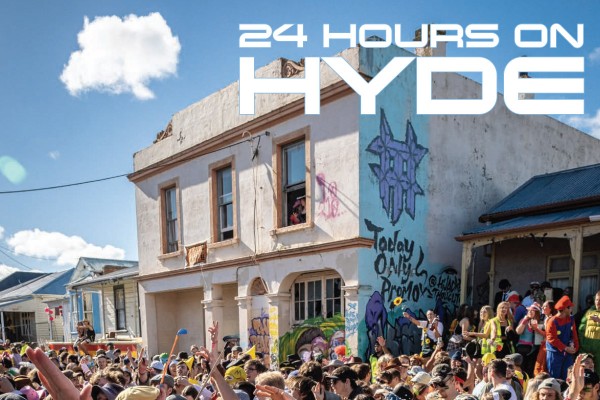 24 Hours on Hyde: Before and After Dunedin’s Biggest Day Out

'Twas the night before Hyde, when all through the street

No sounds could be heard, not even a yeet.

Everyone seemed to be tucked away in their flats, gearing up for the annual Hyde Street Keg Party. This year’s party was highly anticipated, with many hoping to make up for last year's missed experience (thanks Covid).

The echoes of security guards putting up metal fencing was one of the few sounds to be heard, setting the boundaries for the drunken debauchery about to take place. There was a singular staff member standing outside of Leith Liquor, waiting to check IDs as people trickled in, getting last minute drinks for the big day ahead while Hyde residents were moved their cars, boarded up their windows and finished up last minute cleaning.

“We were told not to do anything tonight,” one resident said. “Just because of rubbish, they’re wanting to keep the street clean.”

“We’re just preparing for the big night ahead, and don't want to be tired,” another resident said. Hugh repeated a similar story. “We just literally need to get rid of all the rubbish around our flats,” he said “so there’s no hazards for tomorrow. Apart from that, we’re just chilling.”

Someone must have being pocketing Jim Hickey some serious cash, because the weather was fucking stunning. By 8am, the sound of drum and bass could be heard rattling the streets of North Dunedin. Flatmates were cooking up their breakfasts for the big day ahead, knocking back piles of hash browns accompanied by beer pong. By 9am, the drunken antics had officially begun. Floods of students dressed up in colourful costumes could be seen making their way to Hyde, heads empty, boxes full.

The line to enter Hyde stretched all the way down Albany Street, ending just before the Burns building. It was apparent from the number of confused faces that no one knew exactly where to line up, probably due to the high levels of intoxication. A large sign reading “no pass outs after 1pm” was displayed all across the fencing.

“I’m gonna pass out right now but it says no pass outs before 1pm, what do I do?” said party-goer Millie, who was decked out in a Batman costume and had lost the ability to read. Her flatmate was dressed in a matching Spiderman costume. Although stressed about where to pass out, the pair were still “fucking pinging.”

“It looks lovely, it looks like I’m in fucking heaven. I could not be in a better place,” she said.

Once students had begun to make it through the golden gates, it was packed shoulder to shoulder. Most attendees watched the DJ set with dilated pupils, screaming inaudibly at their friends. Some girls dressed up in army costumes teetered off fences, attempting to get a few good photos before the chaos intensified.

I turned and began talking to a bloke dressed up as a lifeguard. Box in hand, he pointed up at the flat where the DJ set is taking place. “That’s my room right there,” he said. I asked if he was nervous about damage being done. “Yeah, I am a bit,” he nodded. He gives a half assed “okay” sign before slipping back into the crowd.

Hyde Street was officially beginning to kick off with most people through the gates. Resident Amelia, dressed in a blue fairy costume, said “it’s amazing, it’s such good vibes. It’s sunny, everyone is having a mean time.” Her favourite moment of the day so far was “the girl dancing in the Jesus costume.” On a scale of 1 to 10 of fucked, she said she sat a solid 9.5. “It’s only 12, we’ve got 6 hours to party away,” she said.

Further down the street, local Dunedin band The Slinks were playing to another massive crowd, which featured two girls dressed up as a set of a knife and fork. A guy dressed up in a Peaky Blinders costume screamed he was “fucking geared” on “MDMA and alcohol”. He told me his goal for the day was to “get as fucked up as possible” as well as to “fuck bitches get money.”

“This is one of the best days of my life,” he said. His mate, who was also dressed as a Peaky Blinder disagreed, saying “this is not the best day of my life” but he still had the goal to “drink a lot of alcohol and have a boogie.”

I asked if he was on any other substances. “I’m on alcohol. You don’t believe me, but that’s it. You should ask what he’s on,” he said, pointing to his geared up friend. The pair established that they were sitting at about a 7 on a scale of 10 when it came out being fucked. I thought that was a low number given the circumstances, so proceeded to ask why they didn’t seem as cooked as everyone else.

“The size of people, as in how tall you are, dictates the size of your liver, which also dictates how drunk you get. A tall person like me who is 6’4 can drink a box and not be that drunk, because my liver can process the alcohol more quickly, compared to someone like you who is about 5’6” he said, attempting to drunkenly gauge my height. I didn’t ask for the biology lesson, but I hope the info helps someone.

Many party goers began making one last run back to their flats to get alcohol before the one way door policy began at 1pm. On the way back to a flat to grab some last second supplies, an attendee named Phoebe said “the vibe check is good, everyone is off their tits and I really respect that. I’m enjoying being taken care of, OUSA is doing a good job.” She proceeded to explain her goal for the day was to find her future husband, and that if she ends up in the article, she will probably cry. Phoebe, this one's for you. I hope you found your future husband, and enjoyed your cones.

“This is dope as fuck, this is the highlight of my university experience. I will never forget it, I think it’s mandatory,” she said.

Last second arrivals began to run through the gates, showing a sense of relief once they made it in. I stumbled my way into one of the flats further down the street. In the backyard, Millie, the girl dressed as Batman from earlier, could be seen pulling a tacky behind a couch, while a bystander held her hair back. A few others were playing beer pong, while many were queuing up to use the bathroom. Carter, who stayed the night before at the flat, said she was feeling “really good” about the day.

“We got up fucking early, it’s been a long day. My goal is to go in the hamster wheel,” she said. She also said the day felt like a “marathon” and was hoping to make it to 7pm.

The residents of the flat began telling me they were worried about their stuff getting stolen. “I don’t like that people keep pretending they know me just to use our bathroom. A lot of people have just come here and pretended they know us,” one of the girls told me. “I just don’t want shit stolen, it’s really sad, but that’s my goal,” she said. A bunch of security guards then entered the backyard, kicking out a few fence jumpers. After a brief verbal confrontation, one of the fence jumpers quickly threw himself back over, hoping to avoid arrest.

Back outside, crowds were showing no sign of stopping. The music continued blaring, with many still mixing and mingling. A few fallen partygoers were beginning to pass out, attended to by a group of St John’s paramedics.

Amongst the crowd were two girls dressed up as characters from Peaky Blinders. They said the vibe so far had been “fantastic”. The highlight of their day so far was “a girl pissing down an alleyway” as well as their newfound friend, a boy dressed as a banana who they shared another pissing spot with.

One girl said her goal for the day was to “eat 25 sausages and make the most of my $55” as well as not fuck out until 6:30. Back down the other end of the street, local musician and former reality TV star Dave Borrie could be seen taking over the mic. Over the blaring music, he encouraged the crowd to light up their ciggies.

“This is your last chance before you quit,” he yelled. The crowd cheered back. The paramedics, not so much. A guy dressed in a prisoner costume turned to me, indicating he wanted a dart. I had none, so he slouched off and called it a day. A cigarette ended up travelling through the crowd and into the hands of Borrie.

Beside Borrie stood a breatha swinging a fishing rod into the crowd. The bait was a Billy Mav, but within minutes, security took it away.

OUSA President Michaela Waite Harvey was walking the streets, decked out in an impressive banana costume. She commended how well the Red Frogs and Are You Okay teams were doing, and commented that the day seemed to be going to plan. “Everyone is doing a good job, everyone is having a good time. It’s orderly, it’s how it’s meant to be. Our events team does a great job, there is a lot of planning that goes into it. The results show it’s well organised,” she said.

A few flats down, I stumbled into a Hyde resident who was guarding her flat door from the wrath of drunk students trying to get in. “People keep trying to get into our flat, our flatmates keep letting random people in.” She said the day had been stressful, but still fun. “I’m trying not to get our flat trashed, I’m trying to keep it low key,” she said.

Another partygoer began telling me about what she had witnessed during the day. “I’ve seen popes on top of one another, there was one pope, and another pope on his shoulders at L Hotel,” she said. “L Hotel was so good, they finished with a Suzy Cato song,” she screamed before running off.

With the day nearing a close, the party began to clear out. Inside one of the flats, a few girls had passed out on the bed and were drunkenly discussing their plans to get Chinese food on the way home, if they were to make it that far. Outside on the streets, many people’s costumes were stained and ripped as they stumbled their way home through the sea of cans and bottles that littered the street. Some drunk girls stumbled off together, consoling their teary friends whose day obviously hadn’t gone to plan. Some lucky beezies managed to pull, walking home hand in hand with breathas. Others meandered home with their mates, getting set for either kick-ons or a dusty night ahead.

All would awake on Sunday with a raging headache, severe nausea, and the comedown of the century.