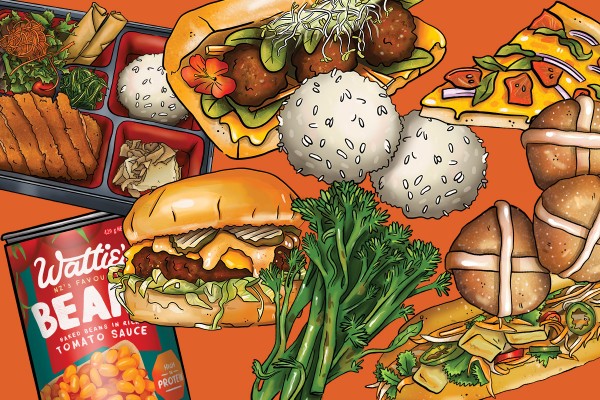 I tried out the spicy tofu pirikara and the spicy katsu vegan meat bento. The spicy tofu, although not all that spicy, was great due to the sheer size of the ‘fu. It was a A slab of pressed soy you could build a shithouse out of.

To say my life was changed forever after the spicy katsu bento box may be an exaggeration, but words cannot describe the beauty of this dish. It made me feel ugly. The box doesn’t even have skin and hair but I compared myself to it anyways, and lost. It could’ve bullied me in primary school and gotten away with it because it of being so pretty. It’s the kind of box that never gets a speeding ticket.

The fake meat was insanely crispy and mimicked the texture of actual meat. The pickled veggies, wee spring rolls and dumplings were great as well.

Pairs Well With: My first orgasm

Price:  $17.50, have your parents take you here when you celebrate a big accomplishment (no, passing BSNS113 doesn’t count)

Rating: 9/10. Worth making a sober walk to the Octagon, or trying to find parking in Octagon.

The only thing I could afford after spending a lot of money this week was the $10 meatball sandwich, which was delicious. The sauce was plentiful, bread was fresh, and I couldn’t tell it was fake meat.

The downside is the price. Most of the lunches cost at least $24, smoothies and shakes around $11 and alcoholic drinks range from $10 to $22, which made my wallet say “please stop”. This is me crying out for a sugar daddy so I can drink vegan alcoholic shakes.

Price: May as well be international student fees

Rating: 7/10. The food is delicious, but at that price you need the vice chancellor’s salary to pay for it

This is a cute shop tucked away behind Beam Me Up Bagels in City Center. It seems they subscribe to the “only open three hours a week” fad which is popular among vegan places. It took me three tries to find them open.

They offer a menu that changes daily, composed of a hot sandwich, cold baguette, a burrito of some sort, and a pie. Their tofu banh mi baguette is delicious. The sauce, the jalapenos, and the crispy tofu combine for an incredible flavour profile.

Unfortunately, a lot of their not-meats/uncheeses taste very similar. I’ve ridden Let Them Eat Vegan once. I feel like they’re gonna start asking me to follow their Soundcloud if I give them too much attention.

In my fresher days, I would find a boy to hook up with just so that I didn’t have to walk back from the Octy. The move was convenient, but it’s no longer to my taste. Watson’s is similar. It seemed amazing when I first got to Duns, but now I find it overpriced and feel it doesn’t offer anything special.

Pairs Well With: School uniforms and learning to kiss in the Meridian Mall

I don’t think Burger Plant is that exceptional so I brought along my flattie who’s in love with it, to balance it out. We split the chook bites with spicy sauce for $4, I got the regular cheeseburger, and she got the Mumbai.

The chook bites were not chicken-like, but they were extremely crispy, and the sauce was delicious. For $4, you can’t go wrong. The best part of my burger was the pickles, but my flatmate raved on and on about the butter chicken sauce on hers. I also tried the $5 sundae, which was huge and had heaps of caramel on it.

Dominos is like that kid from my small hometown: you only see him on the piss, real dusty, or making headlines. If you eat cheese, you’d probably hate their vegan cheese, but I’m used to settling.

Dominos dropped the ball by taking away the vegan Hawaiian pizza with fake ham, which was amazing. The veg trio with vegan cheese isn’t terrible but cooked spinach on pizza is gross. Overall, not the best but I’ll come back when I don’t want to cook.

Pairs Well With: ‘I don’t drink on an empty stomach’

Rating: 5/10. This would be higher if they still had vegan Hawaiian

Nandos is the quiet kid on the fast-food block who’s always been there but is only just starting to come out of their shell. You’re out in town with the lads, and your mate Mark, the Archbishop of Banterbury, suggests you take the banter bus downtown for a cheeky Nandos. But Danny, who’s an absolute Bantersaurus Rex, has been vegan for a year now, not to mention this meme has been dead for even longer.

Nandos has evolved recently, and sports a new menu with multiple veggie and vegan options. Their Great Pretender protein may not taste exactly like chicken, but the texture and peri peri flavour is undeniably yum, even if you do have to get the max spiciness to really get any spiciness at all. Up your spice game Nandos, not all of us enjoy a barely mild butter chicken. The grilled broccolini is a surprising hit as well, and the chips are as good as ever.

I am an absolute hoe for a good rice ball. Miga Hako have two options of vegan rice balls: sweet chili cauliflower, and edamame, carrot, and beetroot. Both options are $3.50, which is incredibly reasonable. The cauliflower, which you can also get served on rice with other veggies, is god-like. The cauli bits are crispy and the sweet chili sauce they use is absolutely fantastic.

They have a range of options, but no fake meat, which is okay because everything else is so tasty anyway. It’s quick, close to uni, and hits the mark every time. You also get to see Richard, who is the Dave from Maharajas of Korean food.

Price: Quite reasonably priced for food that makes me feel like a healthy vegan

A Can of Baked Beans

It’s a dusty Sunday. You can't be fucked driving anywhere and your house has already been blacklisted for one too many frubers. You’re broke from eating out vegan every night this week. You look on your food shelf, and there, in all her glory, is a can of baked beans. Now, in my experience, warm beans are better, but that’s not technically necessary. Cold beans work just as well.

You know what they say. “Give a man a bean, he’ll eat for a day. Teach a man to bean, and he’ll be a bean for life.” Canned beans are the perfect meal. Filling, incredibly cheap, and if you eat directly from the can, the only dish you gotta wash is the spoon. Next time you see someone eating their cold beans in central, maybe don’t be so judgmental. They could be the next Jesus.

Pairs Well With: Sitting on the toilet and using poop map

Price: Cheaper than my old boss

Rating: 6.5/10. Points were deducted for the dignity you lose eating cold beans