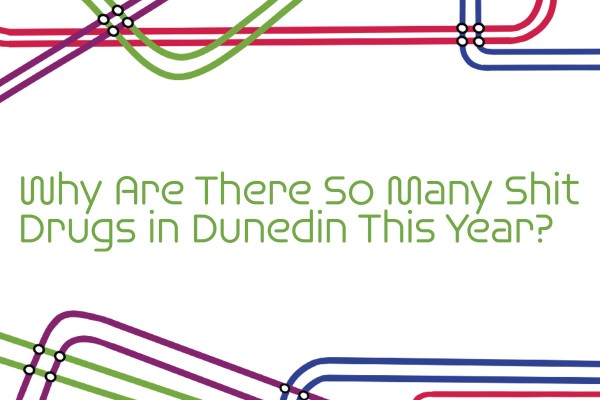 Why Are There So Many Shit Drugs in Dunedin This Year?

We talked to experts and dealers to find where all the good ones went. For journalism.

Molly took one and a half Red Bull pressies at Electric Avenue. She couldn’t sleep for 36 hours. In the following days she had one of the worst come-downs of her life.

KnowYourStuff advice confirms that Red Bull pressies contain a dangerous amount of eutylone, a synthetic cathinone (commonly known as bath salts), and no MDMA. Over the festival season, eutylone became a common substitute for MDMA.

Perceptions of “bath salts”, the informal term for synthetic cathinones like eutylone, largely revolve around repeated horror stories. Students had mixed experiences. Dale* said he and his mates thought it was MD when they bought it but they “found out what it was before [they took it] and it had mostly positive reviews. So we said fuck it and had a good time.” He said “the worst part was the lack of sleep, and knowing it was bath salts.”

Testing services like KnowYourStuff are well-established and trusted by students. They make people are aware of what they have bought. However, in the experience of students Critic interviewed, knowing your drugs are not MD, and choosing not to do them, are two very different things.

Caps vary in price from $25 to sometimes upwards of $40. Pressies are usually about $60. That’s about a quarter of your living costs for the week. Even if a student finds their pressie is pure eutylone, most students are not willing to throw an investment roughly equivalent to 36 of those gross jello shots from Leith Liquorland down the drain.

The students Critic interviewed wanted to get pure MD, but if there was a mistake and they got something else, they were going to take it anyway. Molly was in this situation: “Our mate said she could suss from a third party before Electric Ave. She came back with Red Bull pressies and we knew it was bath salts immediately because KnowYourStuff had just put up an announcement about it. But we’d spent like $320 in total on it, so it's not like we weren’t going to take it.” Students will usually risk the negative side effects of a drug to have a good time, especially if they have already spent money on them.

Dale* said that while on the drug he “felt energetic and confident for most of the night” and “had immense stamina rooting”. “The next day I felt like a crack patient when I went to work, though.”

Molly said the experience was fun at first, but then “you were just really wired. You never felt yourself come up which is the nice part of MD, that rolly feeling. All of a sudden I was up as fuck. And then all of a sudden, my serotonin had run out and I had to find my way home.” Neither Molly or her mates experienced any jaw pain the next day, which would be expected from MDMA.

A dealer, Kevin*, had similar experiences, both personally and through reports from customers. He didn’t feel bad when selling bath salts. “I only sell to mates and they understand that I try my best to get good gear, but that’s not always possible. I never cut it or swap it out, but someone along the chain obviously does. They just get greedy I guess. I’d rather have nothing than be selling my mates shit drugs.”

Recently Kevin turned to doing more ket because “it’s imported into NZ legally so there’s more of a consistent supply of it.” He said in crystal form the eutylone crystals are “like 10x harder, more uniform and rectangular than normal MD”. Taking the gear in Queenstown, he realised halfway through the night that what he had wasn’t MD, but still took another cap because he “wasn’t going to sleep anyway”.

The amount of cathinones detected in Dunedin by KnowYourStuff has at least doubled since 2019, according to the numbers reported by KnowYourStuff. Two years ago, 20% of drugs thought to be MDMA were other substances, compared with over 50% based on preliminary numbers this year. A lack of pure MDMA and an over-supply of cathinones is leading to increasing use of less fun, and more dangerous, substitutes.

Covid made it harder for dealers like Kevin to get pure MD. National Drug Intelligence Bureau manager, Detective Inspector Blair Macdonald, told Critic that the closure of borders for Covid-19 “disrupted international drug supply chains and made it harder for illicit substances to get into New Zealand.” He said that the police have seized 55% less MDMA at the border in 2020 than they did in 2019.

“Eutylone has surged in popularity internationally and appears to be the synthetic cathinone of choice here in Aotearoa,” Macdonald said. “There are likely to be a range of factors causing this marked increase. However, the impact of Covid-19 on the international drug market has seen MDMA less readily available in New Zealand.”

Usually MD sold in the country is either quite pure or totally fake. According to Wendy Allison at KnowYourStuff, “MDMA is not being cut with other things. This is incredibly rare in NZ. Of all the samples tested in the South Island over O Week, only around 2% were a mix of MDMA with some other substance.”

“What we are finding in alarming quantities is complete substitution,” Wendy said. “This is where the sample contains none at all of the presumed substance (usually MDMA) and is actually something altogether different (usually a cathinone, this year it's mostly eutylone).” Things are being sold as MDMA when they just aren’t.

These substitutes have only recently been detected in high levels. According to Wendy, “[for] some perspective, last year only 2% of substances tested turned out to be cathinones. This year it's something like 30%.” KnowYourStuff’s knowledge is limited by the fact that a huge part of their service is not asking questions. Allison added, “obviously the manufacturer knows that what they are selling isn't MDMA, but after that, it's anyone's guess who the liars are … someone is buying a substance they know is not MDMA, and selling it as MDMA.”

The reality is that, despite testing, eutylone is being consumed by a large amount of people.

Because synthetic cathinones are made in legal factories overseas, they are available at a lower price and in much larger quantities than MDMA, which is banned in almost every country and therefore has to be produced in secret. Eutylone, in particular, is easy to find in large quantities. Manufacturers sell it in 1kg packages with maximum production amounts of up to 500kg per month, whereas MD is sold by the gram.

Detective Blair Macdonald from the National Drug Intelligence Bureau did not comment on whether recent police seizures of MDMA had contributed to an increase in more dangerous substitutes. Recently, there have been a number of high-profile busts involving MDMA and eutylone, in Queenstown and Dunedin.

According to Phil Glaser, Programme Lead at New Zealand Drug Foundation, the supply of pure MDMA has been significantly disrupted by COVID. Glaser’s leading culprit is the reduction in international flights (and the postage they bring) coming into the country.

“What we’re seeing is basically 50% MDMA, 50% eutylone at the moment,” Phil said. He added that there is a “cycle” around the supply of MDMA and cathinones, where cathinones are usually introduced in response to a lower supply of pure MD. He said the best way to control eutylone was “definitely by funding testing … but there’s only a limited amount of testing capacity, so funding needs to be improved.”

There has always been a low amount of cathinones on the market, but the stereotype of dealers and suppliers cutting or replacing MD to make a few extra bucks is not accurate. Selling pure MDMA is already extremely profitable. One dealer said “you only need a third of it to arrive and you still make a ridiculous profit.”

Considering that cathinones are so cheap and easy to order, it doesn’t seem like they will stop being supplied any time soon. It’s likely that large amounts are already in New Zealand and whoever is supplying it will try to get rid of as much as they can. They are probably stoked that MDMA shortages mean people will keep buying their shitty drugs.

The health effects of eutylone are worse than MD, and it’s just a less fun drug in general. But you can do things to improve your experience and reduce the harm caused by it. There’s tonnes of information online: from KnowYourStuff to the Drug Foundation’s website, and Erowid, about safe use.

As Dale said: “It’s definitely best to know what you’re in for, if you are going to take it.”