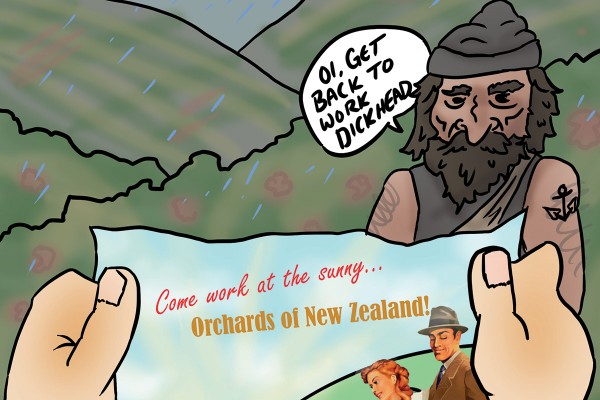 Fruits Of Our Labour: Is Seasonal Orchard Work All It’s Cracked Up To Be?

With the borders at a close thanks to the ripper of a year that was 2020, orchards across New Zealand cried out for help. Many Otago students answered the call to be a “Harvest Hero” and embarked on their agricultural adventure. For some, it didn’t turn out to be the experience they were promised. A summer of orchard work is framed as a sunny, exciting, adventure of a lifetime with guaranteed good cash and flexible hours to help you get through the summer months — but is it?

Some students described orchard work as a “shitshow,” while others considered it decent work. One student who worked at a cherry orchard said he simply “ate so many cherries I nearly shat myself.”

Jonte, a packhouse worker, recalled that there was an intense drinking culture in the packhouse. “If you love alcohol, or going to work hungover with all the other packhouse staff and pickers who are subsequently hungover, go for it,” he said. “My middle aged co-worker told me all about the whims and woes of her multiple divorced husbands and how one of them had had a stag party that ended up with a carrot covered in deep heat,” he said. He would “perhaps” recommend the experience, with the caveat that the seasonal work made him “slightly more mentally ill … but it added just the right amount of casual trauma to drive my sense of humour to an all-time peak.”

Emma, another student who did seasonal work said “that you were treated like slaves,” and that the “working conditions are very reflective of [the orchards’] habit of mistreating foreign workers who can’t get jobs elsewhere.” Many of the students who spoke to Critic faced employment conditions that they were unfamiliar with.

Lily was sold on the idea that hours of orchard work would be flexible and she would be able to get holiday periods off. However, after a week's worth of work in a packhouse in January, her and her friends left. She described the work conditions as “atrocious” and “shocking” saying her and her friends were “on the phone with lawyers all the time.”

“There was no communication. The conditions were awful. We wanted to leave right away. They were having us work 8am to 10pm, with one half-day off a week,” she said. For Lily, the horrible experience began on day one when management failed to inform them that the packhouse, where cherries are selected and processed, would be freezing. They spent the day shivering. This chaos was amplified because they were being asked to work up to 16 and a half hours every day.

“They disregarded well-being, and it was a big industrial environment, there were hazards everywhere. It was like a sweatshop, and I don’t like using that term lightly.” Lily described their break times as “barely legal,” with management only fitting them in at the last second. Alongside this, you weren’t allowed to bring phones or watches into the packhouse to keep track of time or breaks.

The conditions were so bad I got shingles. These were my healthy friends and they couldn’t talk,” Lily said. Her and her friends stayed in accommodation provided by the employer and “we would wake up to sounds of crying and coughing because of how sick [people] were”. She was put on three months’ worth of medication. “Alongside this, if employees wanted a day off, or were sick, the response of management would be “either work 14 hours or don’t come back.”

Supervisors talked openly about a waitlist of potential employees. Lily believes that they did this in order to pressure workers into staying in their jobs. After finishing work, Lily and her friends found they were unable to access their payslips, left unsure if they were even paid what they worked. “We couldn’t access our payslips, we didn’t know if we were getting the right pay. We had to leave, we couldn’t do it. We didn’t have the energy to fight it,” she said.

Lily said that managers would say things like “do it for the money.” “Everyone would say ‘do it for the money,’ it was a psychological thing,” she said. Much like Jennifer, Lily also grew concerned with the treatment that migrant workers potentially face in seasonal work. “Foreigners needed the money so bad and they were really being taken advantage of,” she said.

Jennifer had a similar experience. She took up two different seasonal jobs over the summer period in Cromwell. Jennifer found the ability to get holidays like Christmas and New Year off and having flexible hours appealing. The job appeared to fit with her summer plans and financial goals. “I thought I could really do with something different [like] working in Central [Otago], and I thought because they were short on workers I’d be able to have some say on when I worked.”

After just a week and a half of work, she was made redundant. Jennifer reckoned that “90 percent” of those made redundant were also students. Jennifer and her co-workers were told this was because Kiwis had a higher job retention rate than seasonal migrant workers who often come here and leave after a short period of time. That meant the orchard work was completed faster, and fewer workers were required.

Soon after being made redundant, Jennifer saw that the government was making exemptions for seasonal workers to enter the country, due to apparent shortages. “It didn’t really add up to me,” she explained. “I gave up spending summer with my family, I had left home, got made redundant, then I saw they were bringing in all these seasonal workers, it just didn’t make any sense. It felt like a kick in the teeth.”

Jennifer moved onto her second seasonal job in a cherry packhouse. Again, she was met with precarious work, this time with questionable conditions. Her daily hours ranged from four to thirteen hours a day. Management often failed to tell her the start and finish times for the job. Workers were on their feet for the whole day, standing on wooden pallets, often resulting in injury. She described the work space as “loud, disorganised and ridiculous,” saying that “people would yell at you to work faster.”

“People were getting injured because you were on your feet all day, you weren’t told hours [in advance]. They weren’t giving us proper breaks. It’s hard because you need the money but it does take a toll on you,” she said. “I’m a student here for the summer on minimum wage, I’m tired, I’m hungry, don’t yell at me to work faster.”

The experience opened her eyes to the potential working conditions many of our migrant workers face. “If they’re doing this to us, imagine what they’re doing to seasonal workers who don’t know any better and are just as exploited as us. It made me angry.”

Orchard work isn’t always doom and gloom. Two other students, Bella and Jackson, said they had great experiences, and would recommend the job to others. Bella worked in Te Puke, doing pollen work with kiwifruit. She chose the job because she had struggled to find other work, and didn’t want to go down the hospitality route. “I just thought I better mix it up and do something like fruit picking,” she said. “It was awesome.” With a pay rate of $25 an hour, Bella soaked up the sun and earned a total of about “four to five grand.” She said “the employers were really nice and worked with us. We didn’t have any problems. There were not many cons, apart from not being able to work when it was raining.”

Alongside this, Bella said she really enjoyed getting to know her overseas co-workers, often “getting on the piss” after a long hot day. “I feel like orchard work can get a bad rep, so it’s good to get a different experience,” she said.

Jackson was based at an Orchard in Alexandra and has been picking since year nine which made him a “pretty rich high school student.” He now works as an orchard supervisor making $20.50 an hour. Although it’s hard work, he recommended the experience to others. “Conditions are pretty good. It is hard work picking, but I’ve done pretty much every job,” he said. Jackson has worked in apricot and cherry orchards in a range of roles from picking through to supervising.

“Honestly, it depends how you go and what the weather is like. I’ve always been happy with how much I make and recommend it to other students, but you do need to go into it expecting it to be hard work, and it's good to bring a couple of mates with you,” he said. “Otherwise it could be quite lonely in Central Otago.”

Although her experience didn’t go to plan, Jennifer thought that “fruit picking was a fantastic way to make money.” She cautioned that “it is hard work. It can get really hot, it’s dry, it can be really taxing on you. If you’re new it’ll take you a while to get the hang of it.”

Had she not been made redundant, Jennifer believed she would have made a decent amount of money. “You’ll make a bit of money but not the big bucks they talk about.” In terms of what you hear through the grapevine about orchard work, Jennifer said to “take it with a grain of salt. There’s pros and cons, unfortunately we all feel taken advantage of a little bit. But because it’s seasonal, it's not the usual.”

One student, Eva, who went cherry picking wrote a poem on her smoko break that she reckoned “sums it up”:

yes I’m up a fucking tree

I don’t know why I chose this job

I would rather join the fucking mob

I’m fucking sick of waking up at five

in a week I’m going to quit

then once again life will be lit.