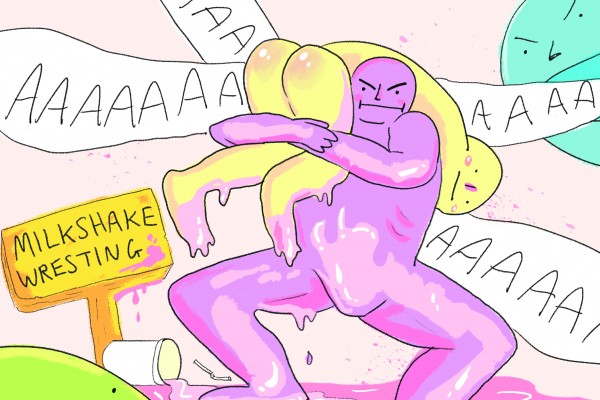 Milkshake Wrestling, Hypnotists and Buckets of Vomit: A History of O-Week

O-Week is a beautiful time of the year. Wearing too much body glitter, you meet your first-year boyfriend for the first time in the line for toga, and then proceed to throw up White Rhinos in the Arana bushes for the remainder of the evening. It’s a confusing, smelly time of sex, social anxiety and pretending to like DnB. For our final issue, Critic delves into the history of Orientation to figure out, well, what the fuck happened? Are the glory days really all in the past? Where did we come from, and where will we go, O’ all-mighty Cotton-Eyed Joe?

O-Week technically started in the 1920s, but it was boring and nothing good happened for at least 50 years. In the ‘70s, Capping sort of fell apart and Orientation started to rise in its place like a twin in the womb that hoards all the good nutrients. This was around the time of the great Dunedin Sound, so in the ‘80s it became a big two-week gig extravaganza; similar to what we know and love today, all based in the Union Hall. Familiar names like The Chills took to the stage in 1984 and presumably rocked, as only The Chills could do.

This all sounds fucking sick, but controversially the ‘80s and ‘90s probably aren’t as cool as your David Bowie wet dreams lead you to believe. To buy alcohol you had to be over 20, which affected approximately “20% of the University” according to an old 1994 Critic, and so students under this age were “excluded from Orientation and the new Union Bar”. When the death of an underage Canterbury student occurred from drinking games (despite Canterbury orientations being alcohol-free), Otago decided to go a different route.

Otago introduced a new system where underage students could go to O-Week. Alcohol laws were weird, presumably because all the lawyers were doing coke in the ‘80s, but those under 20 could drink a limited amount of alcohol, provided they also had a meal. So, for Orientation, 18 and 19-year-olds had to buy a $3 meal ticket each night alongside their concert ticket which was “exchangeable for a large plate of food” in order to drink at the events. Kind of keen for a large plate of food right about now.

However, this system wasn’t as perfect as one might think. A 1994 Critic editorial reads: “regretted getting food at the Union Kitchen because I wasn’t that impressed to say the least. I felt a bit sorry for the underages who were forced to buy a meal ticket.” Uni food: still consistently shit over the decades. At least some things never change. In 1995, the meal ticket price increased a whopping 33.3% to $4. We riot at dawn.

In the late ‘90s, the drinking age was thankfully changed to 18 (still not as good as 1881 which was 16, those were simpler times) and things started to look up. The O-Week headliners of this time are some of the most iconic, such as the Muttonbirds, Shihad, Dave Dobbyn and other people I vaguely recognise the name of.

OUSA Events Manager Jason Schroeder told Critic that during this period, collaboration between the universities was key. "Before Voluntary Student Membership (VSM) the funding was pretty even across the universities, so all the universities worked together.” There was a person whose job it was to source acts for them all, which were often international acts. “One year we had Alien Ant Farm and Violent Femmes, so they would work together as a group and book tours internationally as well as helping acts like Shapeshifter and Fat Freddy’s Drop grow their presence.” Sure, Scribe only performed for a total of 33 minutes, but it's the thought that counts.

The early 2000s saw, in my opinion, the best that Orientation could offer. It was also coincidentally sponsored by Speight's, the greatest beverage ever known to man. The Shane Warne Pie Eating Competition, Screaming Contests, Pavlova Eating Contest, Clocktower Race, luging down the streets of Dunedin, Treasure Hunts, Hypnotists and Comedy Shows all were events held within this time.

Participation began to dwindle, though, and they were cut. Jason pointed out that because OUSA runs on cost recovery, “if people aren’t paying for tickets then we simply can’t afford to run it.” But also in 2009 the University banned alcohol advertising on campus so all that sweet Speights money went out the window - as did our beloved hypnotist show.

In the 2000s, not only was there a toga party, but there was also the Toga Parade. This hit a snag in 2009 where the ODT reported: “hundreds of eggs, bottles, rubbish and buckets full of vomit and faeces were throwing from first-floor verandahs and alleyways as well as at shop frontages.” To be fair, ancient Romans used to throw their shit out of their windows and no one blinked an eye.

The Fresher Comp also ran for a good part of the decade, in which freshers would endure humiliating tasks to win prizes like a trip for two to Queenstown with paragliding, bungee-jumping, jet-boating and the like, with other prizes including Xbox 360s and iPad Touches and a lifetime supply of Mountain Dew.  A contestant from one year told Critic “we had to eat sheep parts, ten pigs; eyes, a heart, a liver, tongue and then like a couple of eggs and some wasabi.”

Other years included milkshake wrestling (Law Camp: take note?). Jason said that “Fresher Comp was fantastic but had low participation and low impact for students”. This is kinda true, some years only ten people competed, but is it too much of a millennial ask to say I deserve an iPad Touch? Maybe so. Perhaps the true highlight of old Orientations were tours of the Central Library, Law Library, Medical Library, and Science Library being offered. OUSA also offered flat-finding tours where a van would shuttle students around flats to have a good ol’ snoop. Just add a Segway to those and I’ll be there, baby.

Voluntary Student Membership (VSM) was introduced in 2011, and consequently, student organisations all around the country started to shrink or disappear. OUSA was only safe because of the student levy fee introduction. “There was an understanding that the University valued OUSA and appreciated what we did, so they would fund us, or partially fund us,” Jason explained. 2011 Orientation was described as “crap” and “a reduced affair” although that also might just have been due to the Christchurch earthquake, which saw the cancellation of several events. Or maybe the fact that Kora was headlining which was described as the “Crappiest. Lineup. Ever.” in one letter to the editor.

2011 also saw the creation of something that would heavily impact Orientation: the Forsyth Barr Stadium. “Going from a 1400 concert to a 4000 person concert is vastly different and so we had to focus on what’s the best use of staff resourcing,” Jason admitted.

In doing so, the very nature of O-Week fundamentally changed, with the stadium pulling all the focus. “Everything was about the big concerts so there was no real-life on campus during Orientation - there was Tent City and that was about it.” OUSA is still trying to claw back this deficit with events like a free movie night and Union Hall concerts, but it’s clear there’s still a long way to go. This transition also meant that O-Week lost the iconic themes that defined each year, such as Sesame Street, Jurassic Park and Space Odyssey. “O-Week 2019” just doesn't have the same ring to it.

According to Jason, shifting O-week from Union Hall to the Stadium did allow OUSA to achieve a better standard of harm minimisation in a safe environment, but to achieve this, “the quality of artists we have to get is way higher than it would be if it were at Union Hall. Orientation is a really tough time of year to book artists. The summer tour run has just finished with Laneway and all those festivals have eaten up the touring artists, and we come in late and there’s not much left.” I, for one, haven’t heard of literally any artists that have headlined at Orientation at the stadium, with the sweet exception of Macklemore, thanks to OUSA booking him in 2013 before the success of Thrift Shop.

Will O-Week ever reclaim its former glory? Last year OUSA had a successful “dry hire” of the stadium, where they managed to control the entire event, from food trucks, to running the bar, allowing lower drink prices. They’re looking forward to replicating this more in the future. That said, their main goal is still “100% harm minimisation. It’s the major reason we do Orientation.”

Just bring back the screaming competition, that’s all I care about.