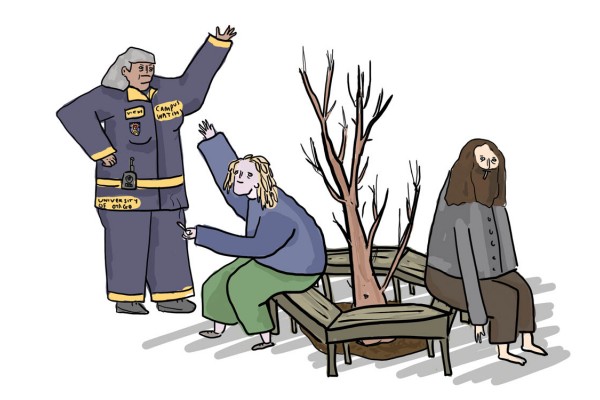 Campus Watch and the Code of Conduct

“We don’t pay our fees to pay for quasi-police”: the not-so-smooth introduction of Campus Watch and the Code of Conduct

It’s 2005 in North Dunedin. Everyone has a bad haircut. Somewhere in the distance students huddle around a burning couch. Broken glass glitters on the footpath. The 4:20 Club smoke cannabis each week on Union Lawn. Bars around campus sell cheap drinks to drunk students. Undie 500 is getting bigger every year. Campus Watch and the Code of Conduct are just a twinkle in the Vice-Chancellor’s eye. Life is good.

But the University of Otago was freaking the fuck out, in a PR sense. “Things were generally pretty rough,” said Joe Stockman, a student at the time. Thanks to scarfie life, the streets around campus were a mess, which wasn’t a good look for the Uni.

The Uni created the Working Party on Student Behaviour in North Dunedin to figure out how to fix student behaviour. The group reported back at the start of 2006 and recommended that “the University should distance itself from any association – direct or otherwise, deliberate or implied – with the student lifestyle where it implies unruly partying and the excessive consumption of alcohol.”

The Working Party decided that the University should introduce a Code of Student Conduct, and a Campus Watch team. Stockman said that Campus Watch’s introduction felt like “a return to the days of in loco parentis style approach where students aren’t treated like young adults […] but like children who need to be told what’s best for them.” Abe Gray, ex-student and leader of NORML, said the implementation “was a total bait and switch”.

For those that didn’t read all the boring paperwork you have to sign when you get to Uni, the Code of Conduct is essentially a bunch of rules about what students can and can’t do off-campus that the University can enforce and punish. Effectively, if Campus Watch catches you smoking weed, the University can discipline you for it.

The University Council approved the recommendations, effectively finalising the proposal, in circumstances that made it look like they were trying to screw OUSA over. Critic reported at the time that only five students, who were past and present OUSA Executive members, had been allowed to see the proposed Code of Conduct. Unable to tell anyone about it, the students were allegedly instead told that students would get to see it and vote on it at an SGM before it went ahead.

Then in 2006 the Undie 500 Castle Street riots happened. People were injured, couches were burnt, bottles were thrown. Already worried about its reputation, the Uni decided to rush the plan’s implementation. Ex-Otago Dean of Law, Professor Mark Henaghan, said “there was real concern that the University had to be seen to be doing something.” He described the sudden subsequent introduction of the Code of Conduct as “a brand exercise”.

OUSA’s 2006 President, Paul Chong, threatened legal action if the Uni tried to implement the Code of Conduct without consulting students. After negotiations, the Uni agreed to an amendment explicitly stating that the Code only applied to behaviour connected with the University.

But then they went back on that promise. On 11 September, Vice-Chancellor David Skegg told Chong that because he had breached their confidentiality agreement, they would not implement the amendment. The next day, University Council passed the unamended Code of Student Conduct, i.e. a Code that only five students had ever been consulted on.

Skegg made it pretty clear that this was not about a confidentiality agreement. The appearance that the Code was being “watered down” would be the “worst possible message” to send, he told the University Council. “Even if every student voted [against it], I would still be advising council to adopt this code of conduct.”

A group of 350 student protestors gathered outside the clock tower, holding signs reading “Consult us you cunts”, “Off campus, not ur fuckn business”, and “You can’t spell Skegg without keg”. Chong stormed out of the meeting and announced over the PA system that OUSA “will see the University in Court”.

Despite the student protest, the Code of Student Conduct was now up and running, and Campus Watch was fully operational by the start of 2007. But students still viewed them “with a pretty wary eye,” Stockman said. Ever mature, Critic abbreviated the Code of Conduct to ‘CoC’ to enable the headlines “University Rams CoC Down Students’ Throats” and “Review this, CoCsuckers”.

After the uproar, the University cooled off on the Code of Conduct and waited a few years before using it to expel anyone. It faded into the background for a while.

Campus Watch, on the other hand, were immediately unpopular. The reason? Weed. The National Organisation for the Reform of Marijuana Law (NORML), headed by Abe Gray, met weekly on the Union Lawn to smoke up as part of the 4:20 Club.

“We saw the red flag a mile away,” said Abe Gray. The previous security services had tried to move them off campus. As private contractors, they didn’t have legal authority over the students. But now, Campus Watch had a legal mandate.

Campus Watch started showing up to 4:20 Club in early 2007. “We told them, ‘We don’t believe that you have the authority to enforce the Code of Conduct over us’,” Gray said. “They said, ‘We’ll call the police then’.”

The 4:20 Club called Campus Watch on their bluff. For the next year, Campus Watch would show up and escort everyone who didn’t have a student ID off campus. Unsurprisingly, most of the 4:20 Club smokers weren’t keen to show their student ID, and things got increasingly tense. In May 2008, Campus Watch sent a student to the Proctor for cannabis possession. He denied the charge - but had to pay a $100 fine based on the accusation.

The following week, the Campus Cop arrested a student for cannabis possession. It was the first arrest of a student on campus since the 1990s, Critic reported. Almost immediately, there was a protest against Campus Watch and the Proctor. It made the front page of the ODT. Students chanted “I don’t pay my fees to pay for quasi-police” and “Hey-ho Campus Watch, don’t forget you’re not the cops”. And somehow, everything went further downhill from there.

At the start of July, three of NORML’s organisers (including Abe Gray) were arrested on a variety of cannabis charges. This came to be known as the Narkiology incident, when NORML revealed that plain-clothed police officers had been brought in to infiltrate the group, acting as students and even enrolling in uni papers. Campus Watch had been giving reports “directly to the Police”, Gray said.

Gray and the two others (all of whom were students) were trespassed from campus for two weeks. The University denied that they had anything to do with it, but the Proctor admitted to Critic at the time that he had told the Police to trespass them. Dr Bryce Edwards, a Politics lecturer, wrote in an open letter to the Association of University Staff that “there’s no doubt that the University and Police are ‘liberally’ throwing around trespass orders against protestors, utilising plainclothes operations on campus, wielding a reactionary Code of Conduct and using Campus Watch to collect intelligence on campus.”

Campus Watch’s involvement in an operation against a student political club did not look good for the University. “And really, Campus Watch was restrained after that,” Gray said. “They had to tone it down quite a bit.” So, they played it safe, and began to rebrand based on safety and alcohol harm prevention.

The Code of Conduct controversy wasn’t over, though. In 2009, the NZ Herald published a photo of fresher throwing a full rubbish bag at a car (the occupants of which were allegedly throwing stuff at freshers) during the toga parade. The student was expelled for a semester for breaching the Code of Conduct. Critic reports that the Proctor admitted “the publicity around it raised the stakes”. In other words, enforcing the Code was about the University’s reputation, not the student’s actions. Henaghan describes this use of the Code as “a knee jerk reaction”.

Prophetically, 2005 OUSA President Steven Sutton predicted this situation when he said: “The next time some sour ODT hack is unable to find any bake sales to cover and decides instead to beat up some dusty moral outrage about an overly raucous student party, anyone who ends up on the front page could find themselves expelled.”

OUSA followed through on their previous threats of legal action and took the University to the High Court, arguing that the Code couldn’t be enforced against students for off-campus activities. They lost. Anything logically connected with the University was within the scope of the code, the High Court decided.

Then, after three years of heated pushback against the new University regulations, everything went quiet. Campus Watch went on a PR blitz and remodelled themselves as ‘not actually cops’. OUSA quietly dropped their appeal against the High Court decision. Students forgot about a time before the Code of Student Conduct and Campus Watch. But the underlying problems still persist.

“[The Code] still sits there but it needs to be revised and looked at in the cold light of day,” Mark Henaghan said. The broad scope of the Code and the University’s refusal to consider student perspectives concern him. “Really, is it doing more harm than good to our students and are we being fair to our students?”

The University stands by the changes. “Initiatives such as the introduction of Campus Watch and the Code of Student Conduct … have proven very effective in targeting issues such as fire-lighting, glass breaking, and, latterly, flat initiations,” Vice-Chancellor Harlene Hayne said upon the release of the 2018 Disciplinary Reports.

But last year saw two of the biggest student protests Otago has had for decades, both of which were in response to the actions of Campus Watch and the Proctor, firstly for removal of Critic’s Menstruation Issue, and then for illegally entering and taking bongs from a Castle Street flat.

“[It’s] that sort of puritanical and petty behaviour that sets up an ‘us and them’ mentality, which won’t help anyone,” Stockman said. “Campus Watch needs a culture shift to where they’re a part of the community; there to help and protect students – not police them.”

“It’s like they had forgotten this whole fucking thing,” said Abe Gray. “They went and stepped in it again.”

Students no longer actively protest the existence of Campus Watch, but that doesn’t mean that the problem is entirely solved. When Campus Watch gets something wrong, they get it very wrong. Since their inception, they’ve been caught between helping students and policing their behaviour under the Code of Conduct. And sometimes, they can’t do both.