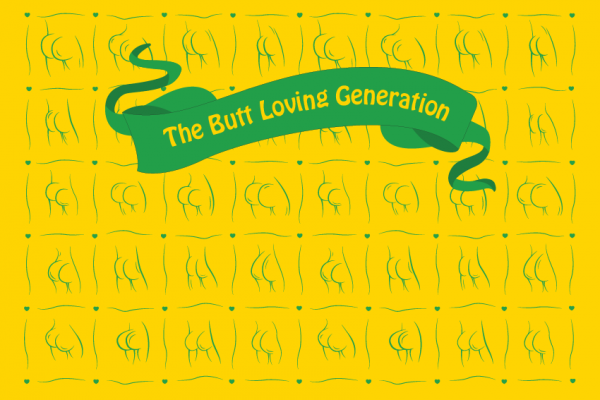 Asses are trending. Belfies are flooding Instagram. Songs like “Anaconda” and “Wiggle” became viral sensations. Brazilian butt lifts increased by 53% in 2013, and women are flooding to the gym to squat their life away. Previously, asking “does this dress make my butt look big?” required a reassuring “no,” but now we hope for a positive “fuck yea, you look thicc”.

Partial thanks go to celebrities like Jennifer Lopez, Kim Kardashian and Nicki Minaj. They flaunt their apple bottoms constantly through social media and honestly, who could blame them? The more they flaunted their rumps, the more attention they got, until . . . BOOM! An ass-obsessed generation ensued.

Butt reverence is also having a positive effect on standards of beauty. Not long ago, European features were deemed the most “beautiful” – pale skin, petite, narrow figures and straight hair. Now it’s all about big butts, hourglass figures, big lips and brows, aspects typically found in non-European women.

Many women are no longer starving themselves to look like a Victoria’s Secret model, but are instead loading up on the protein to look like a Kardashian. The great thing about asses is that you can build one if you work hard – unlike boobs, where you either have them or you don’t. But this ass obsession can also leave women feeling more insecure. Once we just had to worry about being skinny and having big boobs. Now we have to have perky boobs, a big ass and a tiny waist? Pretty tough.

However, butt love isn’t all bubbly and fun, as it can still create some pretty shitty standards, so to speak. One of these is called the “human/toy complex,” where some men see women as either humans, or as sexual objects. Big butts are the latest “toy” and men want to have a play. Even if you have a pretty normal ass, some guys just seem obsessed with smacking it, and that can be pretty fucking disrespectful.

It was my girlfriend’s idea actually. There's definitely an appeal because it’s a taboo, and I found it pretty hot that my partner would trust me enough to do it. I was really paranoid about hurting her the first time, so I worked up to it for ages with my fingers, and used like half a bottle of lube – I was so slippery that I couldn't even hold the bottle! To be honest, it wasn't for me. We tried it a couple more times to be sure, but in the end I felt like she was mostly doing it for me, and I thought that vag sex just felt better – and required a lot less prep. But while we decided full-on anal sex wasn't for us, we did discover the wonders of a finger up the butt along the way. My advice is work your way up to it – don't go straight for the dick! Put something smaller in there first. It can hurt both parties involved if you dive in unprepared. And of course don't pressure anyone or feel pressured to do anything you don't want to do.