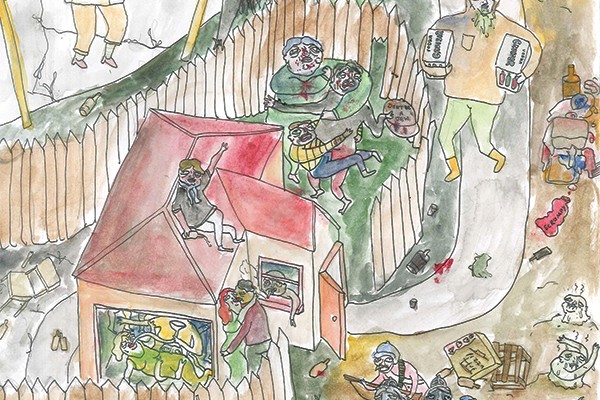 A Wander through the Dunedin Night

I walk through the small sticky red-orange streetlight worlds.

Goth Sloth hails, hanging upside down from his lamp post. “Oi mate, could you point the
way to the Queen’s boudoir?”
All the symbiotic algae on his stomach glow “Fuck the Queen” in neon accord. “You have a
long way to go yet,” I say.
He begins to chew the ironwork.

Three women with twelve eyes and millions of teeth wander past, revelling in their dental abundance.

I notice two ravens perched on the shoulders of a tree. There are no ravens in New Zealand.
At least, not according to the last census. They shiver and hop around, as if trying to
gain depth perception.

The Crocotta mimics the sound of men vomiting to lure its prey. It is ignored in the Dunedin
night and starves behind a rubbish bin.

A man walks up bearing crates of cruisers. As if in tribute he offers me one. Now in alliance,
he asks after my health and I ask after his.
The man invites me to a party spilling past its bounds.

I wander through the party, my cold cruiser totem bestowing safe passage. Music slashes and
great salt sweat libations wash down the walls.

The back garden is taken up by three brutally ugly men competing in some fierce and
masculine contest. The one who’s judged most brutal gets to ‘ironically’ wear
the  DON’T BE A JEW hat.

I hop the fence in case I am chosen as judge. The sound of sails distant.

The Gardens. The fortress of secretive bongs and in-use condoms, spit. A naked man groans
in the treetops; his friends have tied him there and left.
He’s out of sanity, possums creeping in for his liver.

A thud and rustle from the darkness. Addicts in warrens under hillsides, floating under
bridges, deep in burial mounds. Those unlucky enough to be caught after
sunrise fall, sunlight stoned.

Wait a second. That’s the smell of flintlock, not weed …
I’m being - shit - surrounded by Empire.
They creep out from behind statues of queen victoria, colonising the pavement. All is lost.
The stones are stomped into poverty. The uniforms are upon me. Bayonet
smiles and cannon, whispering “god save the queen” under their breath and …

The night becomes dirty with light, smearing a prismatic sheen. A woman surges past,
jawbone in hand, magic sun-catch rope slung over shoulder.

Tags:   features a wander through the dunedin nig