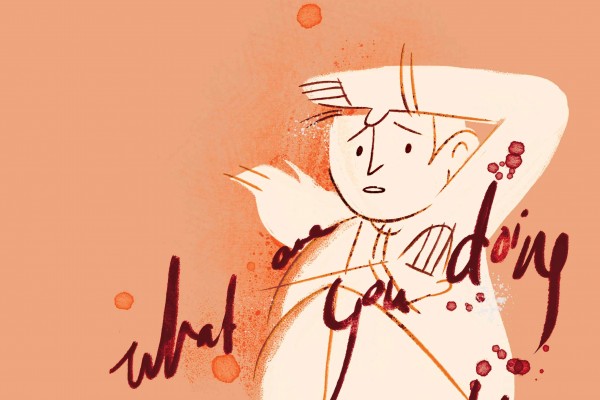 Careers Advice for the Approaching Apocalypse

The house has the forcefully pleasant smell of an open home. Particularly, I imagine, one occurring after a graphic murder. Yes, you read about it in the newspapers and rubberneck at it from the street, but we have had the carpets professionally cleaned so there’s nothing to see here. This insight comes to me as I am standing awkwardly in the throng of mingling adults. They seem unruffled by the cleanliness of the dust-free surfaces. The plump cream couches, with their pinstriped upholstery and petite footstools, are apparently fine to sit on, even for people like me, by which I mean people who came to this tasteful, hor d’oeuvre laden party wearing a hoodie. None of the coiffed, sweatered guests’ behaviour acknowledges that a house this clean must be hiding something sinister. I stare deeply into the burgundy carpet; hoping that my desire not to be talked to radiates out of me in an anti-middle-ager force field. I use the time to list all the excuses I could have used not to come to this wine and cheese party with my family. It turns out that this particular event is nothing like the last wine and cheese I attended, in which large hunks of edam were thrown joyfully across the room as the communal goon circled. However, when the event is thrown by friends of your grandmother, you really hope that it will not devolve into a room full of topless people pashing.

“My, you’ve grown since I last saw you.” This statement enters my ear from the left. I do not turn my head immediately towards the source of the sound, revelling in the last few free seconds before needing to make sustained eye contact with my Great Aunt Maude. The last time Auntie Maude saw me was three months ago, when I had endured her commentary of the entirety of Grandma’s favourite movie: Gone With The Wind. In case you haven’t had the pleasure, Gone With The Wind is four hours long and abundant with seriously outdated social conventions. This, if I remember correctly, was something Maude supported loudly and with gusto. If there is any truth to the fact that I had grown since last seeing her, it was outwards, on a steady diet of bakery goods. Maude had got off to a poor start, but nevertheless, now I had to look into her unobservant eyes unless I wished to appear rude. I prepare an unconvincing smile and turn. She goes in for the kill.

“And what are you going to do after you graduate?” The force of the question causes severe whiplash. My eyeballs roll back into my head. I am unaware that I have fallen on the ground, for I have ceased to exist anywhere but in my memories. Visions of the past flicker in my eyes as a powerpoint presentation of lifelong indecision. I am five and claim I want to be the Queen. When informed that this has been ruled out by my lineage, I, along with deciding that New Zealand should be a republic, also profess my desire to be a ‘stay-at-home Mum’. A few years later, I rule out the Mum part, having just been informed where babies come from. Later, the stay-at-home part will be the dream, but first I want to be an actress. I pursue drama classes from ten years onwards, but it becomes apparent that I am not even fit for Shortland St. So I delegate myself to a future position behind the camera; a wildlife documentary maker, as I desire to emulate the Wild Thornberries. Next, I want to open a hairdressing salon. Grand Designs, and that smooth bastard Kevin McCloud, persuade me that I want to be an architect. An English teacher promotes writing to me as a career, promising I will be able to scrape together enough to live on. That is a short lived dream; neuroscience seems so much more lucrative. It is only half-way into the first year of university that I begin to dread the question.

I come to. There is a slight ringing in my ears. Aunt Maude blinks. I appear to be standing upright again, which is confusing because the question floored me. I clear my throat, as it had been making a vague gargling noise. A circle of voluminous gray hair senses my weakness and descends on me. “Have you considered postgraduate study?” asks a man in an argyle sweatshirt, coming at me unexpectedly from the right. Meanwhile, Aunt Maude is pummelling me from the left with an anecdote about her granddaughter studying at Cambridge who is “just like me”. A low blow is delivered by a pug-like granny I know only as ‘Doris’, who chimes in asking if I have a boyfriend yet. Two dad-like, Kathmandu khaki-clads offer up their sons, before peppering me with comments on how long it was going to take me to pay off my student loan. The swarm leans in menacingly toward me. I perform a well-practiced dive-roll in the direction of the nearest exit. The gang of vultures flap after me, fangs beginning to protrude from their false gums. “Excuse me,” I stammer, avoiding the hands which grab at my hair, “Got a headache.” I bowl out the door, knocking over pot plants as I sprint towards the road.

Thankfully, a bus pulls up just as I hit the road. I am followed outside by an entourage of raving gold-card holders. Aunt Maude leads front and centre, foaming at the mouth. She grabs me by the hoodie, attempting to pull me towards her with a cry of “Come by next week, I’ll introduce you to my nephew, he works in advertising!” I leap onto the bus. My pursuers press their faces to windscreen, but seem to be allergic to entering public transport. As the bus peels away from the curb, they are still yelling. “Loans!” “Jobs!” “What do you want to do with your life?!” I sit uneasily on the slightly crusty seat decorated with neon squiggles and hope to never encounter Aunt Maude and her gang again.

Arriving back home, it appears that a party is in full swing. Someone is getting reacquainted with their dinner in the glass recycling bin by the front door. A friend throws an empty Diesel can at my head by way of greeting. In another room, a window can be heard shattering, followed by shouts of elation. This is home. Tension bleeds from my shoulders and I slump on the couch as someone passes me a red cup filled with a mystery liquid. I throw it back, putting my feet up.  A game of slap cup is being played in one corner of the room, but the rules now seem to involve spilling as much liquid as is humanly possible on the other players. Much of the rest of the room is involved in rabid dancing, which includes a form of the conga line previously unknown to me. Hands that should be resting on shoulders appear to be cupping buttocks; creating one long snake of consensual groping. I am in my happy place, gently picking foam out of the couch.

Then I hear it, at first just a faint buzzing from the kitchen, like distant helicopters, then closer, closer. “Yeah, I guess an A isn’t too bad, I was just a little disappointed after I put in all that work you know.” “Don’t worry about it, you’ll probably get a first anyway.” The voices alight on the couch beside me, twittering about the finer details of the assessment. One admits they could have put a few more hours into section three. Another wants a beefy scholarship. A third looks forward to having a real job so they can buy a house. An office is proposed, and the number of framed degrees on its walls contemplated. All at once, synchronous as a musical number, the group turns to me. “What are you studying?” One chirps. “Where do you see that taking you?” Croons another. “Isn’t that difficult to get a job in?” The whole group cries together, beginning to drool a little. I scoot away down the hall. They come after me, and though I lose them in the crowd, I hear them clicking their fingers menacingly as they search. I hide behind a group of people seemingly engaged in a dance routine. While resembling an ’80s aerobics video, there is something ominous about the scene. Performing a disturbingly well synchronised disco finger move, the group chants “C’s get degrees!” They transition gracefully into a excellently timed pelvic thrust, punctuated with the crowing of “C’s get degrees!” A tricky, well-executed circular jig comes directly on the back of the thrust, accompanied by the wild cry “C’s GET DEGREES!”

The finger-snapping academics find me and, although they yell that they only want to know my grade-point-average, they look as though they might eat me. The Cs sweep me off my feet and hungrily nibble at my clothes and toes. The middle-agers swarm over the fence. A chant is started, at first whispered: “What are you…? What are you...?” Then louder, louder, until I feel my head will explode from the sheer volume of noise. “WHAT ARE YOU DOING WITH YOUR LIFE?” I black out.

When I awoke, I was in a dark room on a mattress on the floor. There were shouts to be heard, but they sounded far away. A figure hunched over a bench in the corner, illuminated by candles. I heard a soft scraping noise, and the person hummed a little tune in time with it. The room, though otherwise unadorned, was lined to its high ceiling with shelves. Each of these shelves was bursting with hundreds of carved wooden animals, so realistic I expected to see one breathe. The figure approached me. It was an old woman, and in the light of the candle she held I felt I knew her face. On the end of her nose perched glasses held together with a bandaid. She wore what had clearly once been a very office-appropriate blouse and pant-suit, but had been embroidered with strange flowers and altered for comfort. “Fought ‘em off you with a few choice words, my girl” she said. “Ooh they didn’t like it when I asked them what they were passionate about, aye. I told the sods that lots of money wouldn’t make them happy, sent their eyes fair spinning in their heads. Finished them with a sly word on not needing to know what you want to do just yet. That’ll show em.” It was my high school career counsellor. “I whisked you up here to safety. They’re still fighting away down there though.” “What do you do up here?” I queried. “Oh, I found after a while that the one thing that made me happy was carving small animals out of wood. It makes me happier than anything else in the world.” “Happy?” I ask. It felt like an age since I’d heard the word. “What a strange concept.”