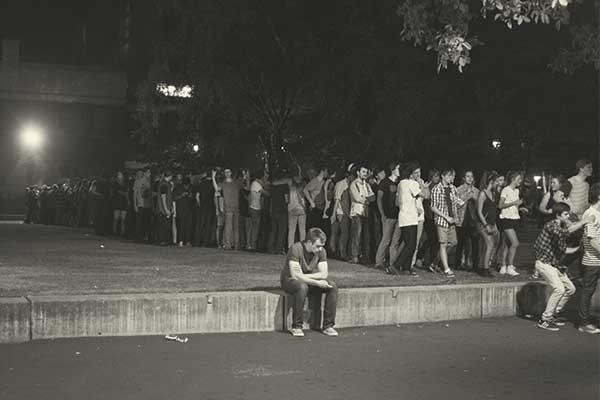 The first sign of trouble came on Thursday evening when I announced I would not be drinking. My flatmates became concerned by 8:30 when I had not recanted my claim and refused to run down to Quicker Liquor for overpriced Scrumpy. They flocked around me, asked me how I was feeling in low, anxious voices.

“Harden up, Princess,” said someone, tentatively.

Confused, I weakly mumbled “I think I drank too much in Re-O," at which point they panicked. There was no consensus about what was to be done.

Someone checked my temperature was still the standard couple of degrees below normal, while another flatmate funnelled a Flame gently between my quivering lips. A med student was called to palpate my liver. Everyone sighed with relief when it was found to still be working poorly. A ten minute argument asserted that the heat pump should certainly not be switched on, but rather three beanies should be shoved on my head  - a la Dobby. While I was refusing to eat the two minute noodles carefully spooned to me from a saucepan, the powers that be deliberated gravely. Various experts were consulted. A health sci, snatched off the street on their way back to Carrington, feverishly repeating that the Mitochondria was the powerhouse of the cell, muttered something about losing a percent and had to be placated with a Vault. Three commerce students, when accosted outside The Cook, were unsure of the cause of my illness but claimed the cure was a yard glass. They looked at me strangely, sagging between two friends, when I whispered “The Cook was better in 2013.”

Yik Yak could offer only cat pictures. My flatmates noticed I had changed my Tinder bio to “enjoys walks on the beach” un-ironically. The evidence could no longer be denied: I had recently been seen cleaning, I had been up before noon every day that week, I had listened to an argument about political correctness and not felt the need to yell in support of either side. Nobody wanted to say it, but we all knew - I had contracted responsibility. I was soon to be a fully fledged adult - my Scarfie self would soon be fodder for worms.

At the supermarket, I used a sensible meal plan (including many vegetables) to purchase food for the week. Adults circled ominously, loaded baskets creaking. I dodged a woman in a power suit toting trolley-bound twins. She was simultaneously putting back things her children were taking off the shelves, checking the ingredients on an expensive sauce, reading a magazine article called Taking your Career to the Next Level and cooing into her phone “Yes, Pam, it’s been a lovely, relaxing week, the kids have been so well behaved.”

I was feeling overwhelmed by the lack of anxiety caused by attending all my weekly classes. What would I panic about at the end of semester with all the appropriate material written up? What would I do with the energy normally channelled into thinking up excuses to get notes off various people?  I had so much more time. There were things I had wanted to procrastinate with. My Scarfie bucket list still overflowed, but there was a hole in it, and my desire for its activities such as running down Castle Street naked trickled away. Perhaps I wanted instead to relax and watch the evening news, letting Donald Trump’s latest antics sweetly lull me to sleep. I was disrupted from my reverie by a fast walking business suit with several bottles of Moet cutting me off at the checkout. I felt sure that if signed up for the Critic blind date, I would turn up sober. God, by the time I graduated, I probably wouldn’t throw my graduation cap in the air.

A bug eyed older woman behind me in the queue leant close with the air of letting me in on a secret. “I’m making the world’s biggest omelette!” she crowed, loading a tray of eggs onto the conveyer. I smiled at her vaguely, gazing past the girls in front of us who raised their eyebrows in condescension. I didn’t want to go to a toga party, but I also didn’t want to egg freshers in togas - what was I becoming? My identity was crumbling. Would I too find my life’s greatest excitement in oversized breakfast dishes? Maybe that wouldn’t be so bad, but would I want to join the Young Nats? As my shop came in disturbingly on budget, I packed it in reusable bags to save plastic and found myself absentmindedly considering returning my stolen road sign.

It was time to seek out an expert - a wise man who, after seven years of hard Scarfie labour, was still alive, although barely kicking. Cham lived in the Cave, a mouldy room in the house that was almost completely underground, in order to save $6 a week. It had given him asthma, a badge worn with pride alongside one for catching an elusive $250 open vessel fine on George St. He often sported a beard so overgrown it had its own bum. He only ate pizza. He was a Veteran resident of Hyde Street and remembered the days when there weren’t tickets to its party. He recalled, in his very distant memories, when Marsh Study Centre was the watering hole Gardies. Cham refused to study there to this day, lest he disturb the ghosts of Scarfies past. Unicol had had its loyalist attendee in Cham, who upon occasion spun a first year tale involving a white ball dress and blue-lagoon-vomit.

Now, he was staring down the barrel of a loaded gun - a respectable job in Auckland next year. This brought with it the prospect of having money, calling into jeopardy his deep relationship with Kmart, goon wine and questionable online Chinese clothing retailers. I visited Cham in his Cave, where he lay prostrate on the bed in the dark. His laptop eerily lit his face, and weary eyes met mine with a look of understanding. I wondered if the laptop displayed the workings of a master's thesis or YouTube videos from deep within the matrix of recommended watches. Perhaps, as was sometimes his custom, both.

“Cham?" I asked tentatively. “They just told me I also have six months until I’m an adult. What do I do? I don’t want to be an adult.”

Cham muttered to himself: “To be, or not to be—that is the question:”

This was very out of character.

“...take arms against a sea of troubles and by opposing end them...”

“I’m really not sure violence is the answer.”

“To die, to sleep— No more— and by sleep to say we end the heartache.”

“Heartache of what? Of failed attempts to turn one night stands into something more? Of terms tests? Of having time to toil at being critical of media content? Of not knowing what to do with your life?"

“...To sleep— perchance to dream: ay, there’s the rub, For in that sleep of death, what dreams may come, When we have shuffled off this mortal coil…"

I decided Cham was mad, and getting madder.

After that, it was a waiting game. I fought, but I did not expect to win. I ate Velvet Burger on Tuesdays. Briefly, the therapeutic effect of floating down the flooded Leith on a blow up mattress was considered, but in my feverish state, dismissed as recklessly unsafe.Instead I pottered, exhausted and thinking of bed, through 10 Bar and Suburbia. Drinking cranberry juice (sans vodka), I reminisced about the time when I got glandular fever in one of these clubs. I decided to sleep with a second year in the hopes of vampirically absorbing its youth. It had wooed me with lines such as “I don’t really get hangovers” and “Yeah, everyone fails CHEM 191.” As this resident of Castle Street fumbled drunkenly with my genitals, they whispered in my ear “Talk dirty to me." I complied.

“Unipol showers after five, the flat kitchen a week into exams, the squad funnel, these sheets."

“Fuuuuuuuuckk…” It was over already.

I dreamed of brie cheese, working dishwashers and island holidays.

In the morning, I woke up at seven thirty, as had become my custom. I rolled over and removed the snapback hat from my bed mate, which had, for the whole debacle, been firmly on their head. I donned it.

“Would you like me to make you breakfast?” I asked, “Some bacon and eggs?"

There was panic in their eyes, and desire. They were in uncharted territory, and a wrong move could be a disaster. Nobody had asked them such a question before. I could see an internal battle taking place - between food, and the fear I might text them. Did me making breakfast mean they owed me something? Would I expect them to add me on Facebook, and if so, would I have a profile picture good enough to gain envy and likes from their friends? Were they emotionally prepared to ghost me, in exchange for only breakfast and some (admittedly good) sex? Why did the offer of food light a small fantasy of monogamy in their hearts? Should they go to student health and get that checked out (or would they be forced to get an STI check as well)?

But I didn’t wait for their answer. I walked out the door, the sun just peeking over the poor unfortunates heading to their 8ams. Rays of sunlight reflected off shards of broken glass on the tarmac. Castle St seemed inlayed with glinting gemstones. I held my head high, for I had no hangover. Parading in all last night’s glory toward the clocktower, clearly doing the walk of shame, not once did I feel a sting of embarrassment or wave of uncertainty. I was too busy thinking how regal I would look in my graduation gown.

Tags:   requiem for a scarfie features