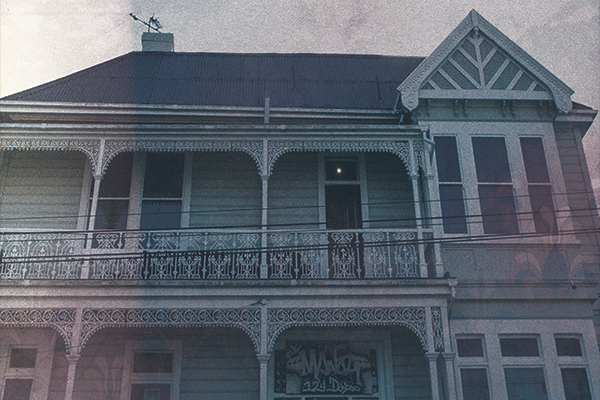 Help, my flat is haunted!

Amber Allott risked her immortal soul to bring you stories of the extra flatmates you may wish you didn’t know about.

Dunedin is reputed to be the most haunted city in New Zealand. You could end up living in one of New Zealand’s oldest, most fascinating residential buildings, in various states of disrepair, with a unique and possibly tragic history. You may, like many before you, end up hearing footsteps clunking up the stairs when nobody else is home, have household objects disappear and reappear without cause, have lights switch on and off by themselves, or even hear a faint whisper from the somewhere in the dark as you lay in bed one night. So how do you know whether or not your flat has an unseen flatmate hanging around, not paying rent, and what, if anything, can you do about it?

Dunedin has a pretty colourful history for such a small city. Andrew “The Hairraiser” Smith runs infamous nightly ghost tours around Dunedin. He’ll show you an alleyway haunted by a sinister black dog, an old factory where a mysterious fire claimed several lives, and an innocuous looking building in the city centre where a fatal mail-bomb was set off. Dunedin’s most famous haunted buildings are the glamorous old churches, hotels, theatres, and the magnificent but dark-historied Larnach Castle, but scores of the more mundane looking places are chock-full of the same essence of tragedy and mystery. As such, Dunedin is not short of people who have had their own brush with something unexplained.

Whilst visiting Larnach Castle with her family, high school student Emily and her younger brother, David, had a spooky experience. After reading the kids brochure, which talked about ghost sightings on the third floor, young David was rather spooked. Since there were still twenty minutes left on the tour, Emily decided to take him along for a look, to show him that there was nothing to be afraid of. Up they went. Emily felt slightly ill-at-ease when she noticed the floor angled on a slight slope towards the open staircase. Meanwhile, David was examining one of the bedrooms. Emily realised that it was just her and her brother on this floor, alone. That’s when she noticed the curtain covering the entrance to the boudoir was shivering. Wanting to show David everything was ok, she said to him, “See this shivering curtain?”

“It’s not moving.” He replied.

“Yes it is, just a little if you look closely.”

Emily was just about to launch into her totally logical explanation so that he wouldn’t be scared and they could be off on their merry way when David leaned towards it, only getting to: “No it’s n-” before the heavy, green velvet, draping-on-the-floor curtain concaves inwards a mere thirty centimetres from his head. Inwardly exclaiming ‘what the fuck?’ but ever logical, Emily said, “Okay Davy, see there must be some tourists in there, making it move.” David pulls back the curtain and looks inside, comes straight back out, looks her right in the eye, as pale as a sheet, before sprinting for the stairs nearly screaming. Still thinking maybe it could be air currents making the curtain move, Emily tried shaking her hand vigorously in front of it. It didn’t move an inch.

I received stories from Dunedin residents past and present, as well as by people from around the country, encompassing everything from cats spooking at unseen objects, to a homemade Ouija board stirring up serious trouble in a former rectory. Current Dunedin student Elizabeth* had her experience with the paranormal in a flat in Wellington, with a dark, scary little kitchen. One night, after walking into the room with the lights off, she thought she saw a ragged-looking figure in the corner. Scared, she told her flatmates, who all believed that Elizabeth had seen a ghost. After that, they had a few people staying in the lounge right by the kitchen, who claimed to hear footsteps, clinking glasses, and muffled speech coming from the kitchen at night. One day, Elizabeth and her boyfriend were woken late one night by a curious sound. Despite turning on the light, the sound continued; a deep ‘bong’ coming from the corner of the room. They looked and saw the boyfriend’s double bass lying on its side, making a noise as though someone were plucking the strings, despite nobody else being in the room with them.

Another current Dunedin student, Jasmine, recalls a story from when she lived in the Philippines at age eight. Growing up in the Philippines, she heard some interesting stuff, and Jasmine swears that half the country is either haunted or possessed. As a kid, she was told never to go to certain areas, lest something sinister befall her. One of her nannies was not one to listen to local legends, and headed off to one of these taboo places. Next thing Jasmine knew, her nanny was being exorcised because she had disturbed a violent spirit. Jasmine was eight and doesn’t know what went on in the exorcism. Her parents laugh about it now, but at the time she was shit-scared. The nanny had to be replaced after that incident, and Jasmine doesn’t know what ended up happening to her.

There are plenty of residential buildings with stories as strange as these right here in Dunedin. Demelza Clinch is a Dunedin resident who has been researching local paranormal activity for a book on haunted Dunedin. She grew up in a house with various unexplained goings on, and has a deep fascination with the history of buildings and houses, so this book seemed like a perfect marriage of her interests. What has surprised Clinch, in the course of her research, is just how many stories she has heard about student flats. One flat on Cargill Street has had reports of various paranormal experiences dating back to the ’70s. One woman reported doors banging, and objects being mysteriously moved. Another man had the same experience in the ’80s, and Clinch has found an archived story from the Otago Daily Times reporting students having problems there in the ’90s. The house has a sad story behind it. The original owner of the house was building it for his beloved wife, who passed away before it was finished – leaving him heartbroken and unable to complete it.

So, if you’re living in one of these flats, what should you look out for, and what should you do? Mark Wallbank, an investigator for one of New Zealand’s most prominent paranormal research teams, and author of two books on the subject, Talking to Shadows, and Voices in the Walls. He has a lifetime of experience with all things out of the ordinary. As a kid, he was obsessed with horror comics and ghost stories, and UFOs, ghosts, and elusive cryptids like bigfoot and the Loch Ness Monster fuelled his imagination. He first headed out into the research side of the field aged ten, exploring burned out or abandoned old houses that were littered around the bush and paddock-lands of pre-suburban Howick. Around 1985, he teamed up with a couple of mates, and armed with a torch, camera, and tape recorder, set out to document and hunt ghosts. They were called “Auckland Ghost Hunting Group,” and although it hasn’t been verified, they may have been New Zealand’s very first paranormal investigation team. Nowadays, Wallbank is the leader of Haunted Auckland, a paranormal investigation and research group based in Auckland, who offer support and assistance to people who believe they are experiencing paranormal activity in their home or business, for a standard home-visit fee of some chocolate biscuits or baking, and a cuppa.

One of the most jarring experiences Mark has ever had with the supernatural involved a home with a dark past in New Lynn a few years back. “We spent a full night in the home, while the family stayed elsewhere. I spent some time, by myself, lying on the daughter’s bed, as there had been many incidents reported coming from that room. I had the audio recorder going in an attempt to have a few staple questions answered. I was lying on my back with both arms up behind my head, my camera ready at my side. Almost ten minutes into the session, I jumped up, as I felt the exact sensation of long hair slowly being dragged along my arm… It was like a woman had leaned over me, moved from left to right, slowly draping her long hair across my arms. It was an amazing experience. I could feel all the long hairs running through my arm hairs!”

If you think that your flat might be hosting a mysterious presence, Wallbank says that there are some common phenomena to look out for. These include:

True hauntings are reportedly very rare, and it may be difficult to determine whether or not any strange occurrences you are experiencing in your house might be due to an actual haunting. For one thing, no one has really defined what a ‘real’ haunting is – or what causes it. No two cases are alike, and while one may feature only a single, very particular phenomenon, others may feature the whole shebang, from odd noises to full-blown apparitions. “There are no experts or professionals in this field. Anyone that claims to the contrary is fooling themselves and their clients.”

If you are being haunted, the most important thing to do is to stay lucid and rational. Don’t get into a blind panic about ghosts running amok in your flat. “Many people jump to an instant ghost answer and spend the rest of their time being miserable, anxious, and too scared to live at peace in their own house. The imagination can be a powerful thing. Don’t let it take over.” Instead, Wallbank advises that you thoroughly investigate to see if anything seems out of the ordinary. Look closely, use your brain, and work through the possibilities. He recommends that if there is ongoing activity, you keep a log or a journal, noting down dates, times, and a description of what happened. From there, it can be determined whether there are any patterns to help form an investigation strategy or approach. Clinch adds that if it is particularly bothering you, you can contact the Dunedin Spiritualist Church, or even your local church, for a cleansing or blessing.

If you want to get out of the ghetto and do some real ghost-busting, keep in mind that it’s not all fun and games. “In reality,” Wallbank states, “paranormal research isn’t exciting. Sure, it has its moments, but the majority of the time it can be very dull. Sitting quietly for hours in dark, cold rooms, waiting for something to happen. Then there’s the post-investigation review and analysis work... We have people contacting us wanting to join the team all the time, inspired by the television shows. They are quick to bail when they find out that they have to actually do things resembling work.” It’s also important to remember that for some people, the paranormal can be an area of much fear and superstition, and it’s important to respect them, and their beliefs.