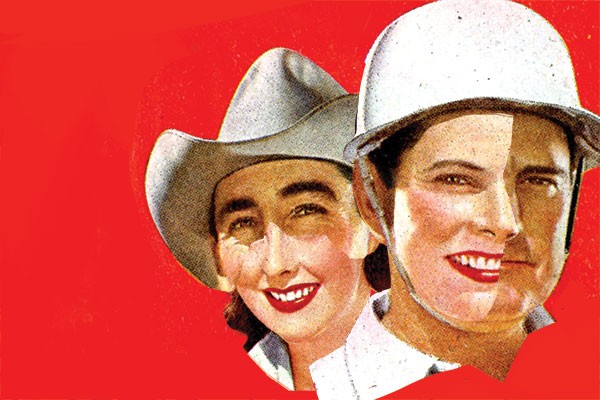 With recent headlines hailing Bruce Jenner's interview as an "Ellen" moment for the trans* community, we take this opportunity to educate and explore the world of sexuality and gender.

A few weeks ago Bruce Jenner, a former Olympian and present member of the Kardashian clan, revealed to the world that he is trans*. Since his announcement, the trans* rights movement has been gaining momentum the world over, and people everywhere have been taking the initiative to educate themselves regarding gender, sexuality and identity.

In an ideal world, sex education during intermediate and high school years would involve a well-rounded and all-encompassing view of genders and sexualities. Recently, it was reported that an “abstinence-only” high school in West Texas had suffered an outbreak of chlamydia. This event could have easily been avoided. In his interview with Diane Sawyer, Jenner had to remind her — after several confused questions — that gender and sexuality are two completely separate concepts, “like apples and oranges”, he said.

Currently, there are at least nine trans* New Zealanders in prison — 0.1 percent of the total prison population. Under previous Department of Corrections policy, only those trans* people who have undergone gender reassignment surgery are placed in the prison of their identified gender. A revised policy has recently been approved which entitles eligible prisoners who have amended their birth record (to change their given sex) to be placed in the prison of their true gender. If an eligible trans* prisoner has not amended their birth record, they may apply to the chief executive of the Department of Corrections for placement in accordance with their identified gender.

This has been a big year for trans* awareness. Laverne Cox is a transwoman and star of the television show Orange is the New Black, and she graced the cover of Time this year. American President Barack Obama used the word “transgender” in his State of the Union address, becoming the first ever president to do so. While the trans* rights movement has made obvious progress, there is still a long way to go. Rates of both homicide and suicide among the trans* community remain high, with recent estimates from the American Foundation for Suicide Prevention stating that around 41 percent of trans* youth will attempt suicide at least once in their lifetime.

Before getting into too much depth, a few definitions might be of use. These are not the exclusive and single definition of each term; they are interpretations designed to help clarify meanings of words and phrases.

Sex:  the body you are born with (e.g. male, female, intersex), aka what you assume is in someone’s pants.

Gender: the social role you are assigned — usually based on biology (e.g. man, woman, none), aka what the pants are made of.

Gender identity:   the social role you desire (e.g. masculine, feminine, androgynous, none), aka what the pants are made of and how they are accessorised.

Sexual orientation:   what you desire in your partner(s), aka what the person in the pants wants to do with at least one other person while the pants are off.

Each of the above exists on a spectrum that ranges from one extreme to another.

The words “sex” and “gender” are often used interchangeably, but many linguists and sociologists would argue that their usage is, in fact, rather distinct. A person’s sex refers to their biological and physiological traits, whereas a person’s gender refers to their behaviours, roles, expectations and activities within society.

Kate Bornstein, an American author, performance artist and gender theorist, is well known among the LGBTQ community. In one of her works, “Gender Outlaws: The Next Generation”, she says: “Instead of saying that all gender is this or all gender is that, let’s recognize that the word gender has scores of meanings built into it. It’s an amalgamation of bodies, identities, and life experiences, subconscious urges, sensations, and behaviors, some of which develop organically, and others which are shaped by language and culture. Instead of saying that gender is any one single thing, let’s start describing it as an holistic experience.”

As suggested by Bornstein in describing gender as a holistic experience, gender identity cannot be used to predict a person’s sexual orientation. If a person expresses themselves in a more feminine fashion, accessorises their pants with a “femme flair”, you could say — how on Earth does that tell you anything about their sexuality? Simply put, it doesn’t!

Heteronormativity is the belief that, in basic terms, anyone and everyone you meet in life is heterosexual and cisgender, until proven otherwise. Heteronormative behaviour is, regrettably, very commonplace. It is because of this that anyone who identifies themselves as being outside the cis- and hetero-demographic must go through a “coming out” process, in which they “reveal their true selves” to friends and family members.

If one individual has to announce their sexuality and/or gender to the world, why doesn’t everyone?

“It’s just a phase.” “You’ll get over it.” “Why have you chosen this lifestyle?” “That’s unnatural.” Loved ones hearing for the first time that their friend/family/associate is not of the cis- or hetero-denomination have used all of these phrases time and time again, without thinking for a second about the hurt they are causing. “It’s easy to fictionalize an issue when you’re not aware of the many ways in which you are privileged by it,” says Bornstein.

N.B. People who do not respect your choices are not good people to keep in your life.

Everyone spends time reflecting upon their own sexual identity and behaviours, and it can be during these periods of self-reflection that individuals come to find that perhaps they don’t quite fit into the pre-existing metaphorical box they thought they did. The problem with any identity shift is fear of change. By nature, when we attach ourselves to a concept, we fear changing it. This can be for a number of reasons: fear of rejection, worrying about “betraying” others in your community, fear of abandoning the familiar (and the list goes on).

According to Statistics New Zealand and the Gender Identity report published in July of last year, New Zealand does not have a standard definition of gender identity. The report itself drew on the Yogyakarta principles, which were developed by international human rights experts in 2007 to act as a guide for applying international human rights laws and standards to gender identity and sexual orientation issues. Statistics NZ also wrote about the concept of gender identity as being “dynamic, with the terms in vogue and their meanings changing over time”. The report was written as a semi-proposal for changes to be made to the next New Zealand Census, as currently Section 24 of the Statistics Act explicitly states that Statistics NZ should obtain data regarding sex rather than gender identity.

In 2004, the Human Rights Commission reported on the status of human rights in New Zealand and found that trans*, non-binary and intersex people (in this country) face discrimination in several aspects of their lives. The Human Rights Act 1993 outlaws discrimination on the grounds of sexual orientation and gender identity, yet some examples of inequity are still reported (for example, the New Zealand Blood Service defers any man who has engaged in any type of intercourse with another man in the past twelve months from donating blood, regardless of whether or not they used protection).

There’s no wrong way to be “gay” or “straight” or any other sexual orientation. Perhaps a person who identifies as lesbian also finds themselves very attracted to certain men — does that make them bisexual? Only if they want it to.

A person’s gender can change over their lifetime. Gender identities vary greatly, and not all people fit into pre-existing categories. Everyone defines their orientations and identities differently, and each individual’s personal definition should be respected. In the words of the ever-brilliant Kate Bornstein, “Let’s stop pretending that we have all the answers, because when it comes to gender, none of us is fucking omniscient.”

* Trans is an umbrella term used to be more inclusive of various communities and individuals with non-binary gender identities and/expressions. It is used by some individuals as an identity to describe just themselves, (e.g. “I identify as trans*”), but it is also possible that someone who holds an identity that falls under the trans* umbrella to not identify with the term.

Agender: Someone who identifies and/or feels like they have no gender.

Bigender: Someone who identifies and/or feels like they simultaneously, or consecutively, have two genders.

Cisgender: Someone who identifies as the gender they were assigned at birth.

Genderfluid: A gender identity that changes with time, circumstance and/or situation.

Genderqueer: An umbrella term for anyone who identifies as anything outside the “gender binary” of masculine or feminine (also known as non-binary).

Intergender: Someone who identifies as being between genders, or a combination of genders.

Pangender: Someone who identifies with many gender expressions.

Polygender: Someone who identifies as being more than one or a combination of genders.

Trans*: An umbrella term for anyone who identifies as anything under a non-binary gender, or is transgender.

Transgender:  Someone who identifies with a different gender than the one they were assigned at birth. When an individual identifies and/or feels as though they were born with the wrong-sex body and attempts to correct this, they are transsexual.

Allosexual: Someone who experiences sexual attraction.

Asexual: Someone who does not experience sexual attraction, or experiences such a low level of sexual attraction they do not consider it notable. N.B. Asexuality is not celibacy, and — as with all gender/sexuality-associated concepts — it exists on a spectrum.

Bisexual: Someone who is emotionally and/or sexually attracted to two genders.

Demisexual: Someone who does not experience sexual attraction until they form a strong emotional connection with someone.

Heterosexual: Someone who is sexually attracted to people of the “opposing” sex/gender (i.e. female/woman attracted to male/man and vice versa).

Homosexual: Someone who is sexually attracted to people of the same gender or same sex.

Omnisexual: Someone who feels equal levels of emotional and/or sexual attraction to anyone, regardless of gender.

Pansexual: Someone who feels emotionally and/or sexually attracted to anyone of any gender; attraction is based on an individual’s personality.

Polysexual: Someone who is attracted to several, but not all, gender(s).

Pomosexual: Someone who does not wish their sexuality to be placed into pre-existing/conventional categories.

Skoliosexual: Someone who is sexually attracted to non-binary identified individuals.

Spectrasexual: Someone who is sexually attracted to people who identify themselves on a spectrum of genders and/or sexes.

Correction: Until his reassignment surgery, Jenner prefers to be called “Bruce,” “he” and "him.” Critic apologises for this mistake and the article has been corrected (Monday 18 May 2015).