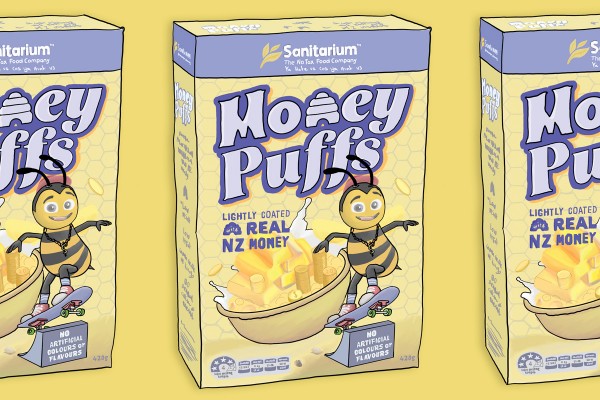 Something Rotten in Aotearoa’s Supermarkets

Sanitarium is the company behind Up & Go, Weet-Bix and Marmite. They’re also owned by the Seventh Day Adventist Church, meaning that they get some special say when it comes to where their tax dollars go. For a company that made $10 million in profit in 2019, that’s quite the say.

In Aotearoa, companies designated as “registered charities” can donate their profits to charitable causes rather than pay tax to the government. This means that charitable organisations can use their profits to further their charity work, which sounds great in theory. In practice, it means that major companies like Sanitarium end up with a large sum of money each year to put towards charities of their choice. They provide funding to schools, old people’s homes and other legitimately charitable stuff, but plenty of money goes elsewhere, too, like to the All Blacks.

Since 2007, the Church confirmed that $13 million in profits from its New Zealand stores has been invested into three companies in the United States. These companies (Sweet Green Fields, Primordia Seeds and Asklepion Pharmaceuticals) largely focus on food-related technology, which makes sense. But the revenue made from New Zealand shoppers does not have to be re-invested through NZ taxes, as it would be through ordinary companies. Instead, it can be invested overseas.

Those three companies came from a list reported in 2012 by the NZ Herald. In their report, they noted that Asklepion Pharmaceuticals seemed like an odd choice for a food brand, as they don’t explicitly develop food technology. When they dug deeper, reporters found that Asklepion listed Kevin Jackson as their chairman. Kevin is also the chief executive of Sanitarium’s Australian branch. Jeff Courtney was also listed on the Asklepion page - he’s a former GM of Sanitarium. He was also the CEO of Primordia.

It was tough to dig up any info on what Primordia is up to these days, but they look to be a hemp company. When you click on the “who’s behind Primordia” option on their website, it takes you nowhere. Sweet Green Fields looks to have been partially sold off after a successful venture making stevia, and Asklepion made absolute bank after developing a drug for liver disease in 2015. The return on that investment was reportedly quite large for the Church’s NZ investors.

Sanitarium is a vegan-friendly brand, as “health foods” are a priority of the Church. Most vegan-friendly consumables in the supermarket bear the Sanitarium logo. And yet, very few students we spoke to knew that the Church had anything to do with their healthy living, or that the Church could use student’s dollars to invest as they saw fit. Linea, a God-fearing Christian, raised the excellent point that “students pay taxes and we’re broke.” While their donations purportedly must align with the public good, ‘advancement of religion’ is considered to be part of the public good by the Charities Act of 2005. So these donations can go towards advancement of religion, administered by a Church that believes that “sexual intimacy belongs only within the marital relationship of a man and a woman.”

But Sanitarium isn’t the only thing odd about New Zealand’s supermarkets. The supermarket sector itself is rotten, caught in a chokehold by the two companies that own all of our grocery stores: Woolworth’s (Countdown, Fresh Choice, SuperValue) and Foodstuffs (Pak’n’save, New World, and Four Square). Through some legal wrangling, these companies have ensured that no third party can enter their market, build near their stores, or disrupt their duopoly. And with their hands on the steering wheel of our local food supply, they’re free to steer prices up and up and up. Jowan, aghast at the price of food, told Critic that “if it's not free it's not green.” Meanwhile, Finn shared his natural immunity to unreasonable price hikes, saying “I just eat bread.”

Commerce and Consumer Affairs Minister (and renowned downhill mountain biker) David Clark reported in March that the supermarket industry is raking in $22 billion a year, which averages to $6 million a day. They make over twice as much as is expected for their industry. The Commerce Commission report detailed that “their profits are at least twice as much as is normal for the international supermarket sector, in part because they have used “confusion marketing” to befuddle consumers, regulators and politicians into doing nothing for decades.”

Also detailed in the report was the notion that “the two major supermarket groups use confusing promotions, price labelling and loyalty schemes to make it harder to properly compare prices across time and between the two.” So remember, kids: just because Pam from New World says something is cheap, doesn’t mean it is. And Jesus loves Weet-Bix.