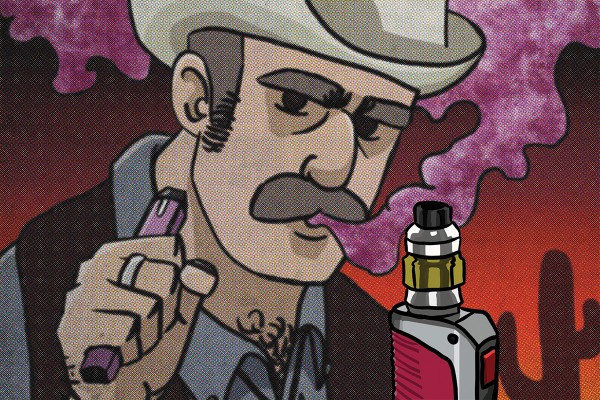 From “e-cig” to lifestyle accessory: how Big Tobacco transformed the vape

It’s a rapid rebranding unlike any other in history: from clumsy, unwieldy and distinctly uncool “electronic cigarette” to sleek, ubiquitous, essential lifestyle accessory. Here’s how vapes got Aotearoa in a stranglehold: a story of powerful corporations, cheap manufacturing, and slow Government action.

Back in the ’70s, you could smoke on planes and nobody thought twice about it. Flight attendants used to call the smell they came home with “Ode de Boeing”, and cigarette ash used to coalesce in beads of sweat and drip down the side of the cabin. People don’t look at cigarettes the same way today, but there’s no question that vapes have become ridiculously popular. And this collective switch in preference happened extremely quickly - as one former international student told us, “When I came [to Dunedin] in 2018, everyone was smoking cigarettes, even I started smoking them… but when I came back in 2019, literally a year later, ciggies were gone, and every single person was on vapes. It was crazy, it happened almost overnight.”

For us older folks, it may seem that vapes just burst onto the scene yesterday. But for younger members of Gen Z, the 3-4 year tenure of vapes means that they’ve been a part of life all throughout highschool. This means that the habit can begin early. In a 2021 survey conducted in part by the Asthma and Respiratory Foundation, a whopping 27% of the 19,000 high schoolers surveyed had vaped at least once in the last week. Three-quarters were vaping daily or several times a day, mostly with high-nicotine doses (which was defined as 24-50mg). It’s not like they didn’t know what they were getting into, either: a majority of these daily vapers (52%) knew it had a negative effect on their health, but most respondents felt they were too addicted to quit.

Lost behind a fruit-scented mist are the distinctly humble origins of the vape. Invented by Chinese pharmacist Hon Lik, it was a way for him to try and kick the heavy smoking habit that had killed his dad. One night, he accidentally left his nicotine patch on overnight, causing a terrible, nightmare-filled sleep. From then on, he resolved to come up with a better way to deliver his hits: one which looked and felt as relaxing as smoking, while minimising the toxicity of, well, inhaling burning shit. His first Ruyan (“like smoke”) e-cigarette was released in China in 2004.

Early e-cigs were unreliable and a bit crap, and Big Tobacco mostly laughed them off as novelty toys. But as their profits were increasingly squeezed by anti-smoking legislation and a rapidly-ageing user base, they began to pile onto the vape train. In 2013, Hon Lik’s patents got bought by Imperial Tobacco, where he’s now a consultant. He still smokes tobacco.

One by one, the members of Big Vape were swallowed by Big Tobacco. Today, Juul is owned by Altria, Vuse is owned by British American Tobacco (BAT), Blu is owned by Imperial Tobacco, and IQOS by Philip Morris International (PMI). And once vapes got into their hands, Big Tobacco did what they do best: transform a poisonous substance into something “cool”.

Technically, since 1990, any “tobacco product advertisement” has been banned in Aotearoa under the Smokefree Environments Act 1990. Vapes, however, slipped through a loophole in that law: while the liquids/pods were “tobacco products,” the vapes themselves were technically not. So, as long as any ads were only advertising the vape itself, and not the tobacco-containing pods or liquids, it was all fair game. This opened the door to some very creative marketing approaches.

For example, IQOS took out ads on Tinder in 2019, promoting their vapes in NZ as “a perfect match for 7.3 million users and counting”. An investigation by the Reuters news agency found they hired Instagram influencers as young as 21 to promote their products, breaching their own marketing regulations. Vype (now known as Vuse) sponsored 2018’s Rhythm & Alps before taking centre stage at 2019’s Rhythm & Vines, giving out free tickets, “festival survival kits” and 50 ePod starter kits, as well as plastering their logos over a whole “Vype village” at the festival kitted out with everything from a “Vype lounge” to a “Vype waterslide”. This was, of course, shared all over R&V’s Facebook page too.

Asked by Critic Te Arohi about whether it was appropriate to be sponsoring these events, Live Nation, who runs Rhythm and Vines, did not respond to Critic Te Arohi’s request for comment. A BAT spokesperson didn’t answer directly, but said in a general statement that they “are clear youth should never use tobacco or vaping products”. PMI did not respond to the 2019 allegations at the time, but PMI spokesperson Peata Melbourne repeated similar assurances in a separate 2019 interview, saying that “...we don’t promote to youth. We don’t want youth to come anywhere these products.” IQOS was the company that hired 21-year-olds to promote their product.

Professor Janet Hoek, a public health researcher at Otago Uni in Wellington, doesn’t buy the promises. “As a former marketing professor, if someone had asked me to develop a plan to reach people who'd been smoking for several years and tried unsuccessfully to quit… I  wouldn't have put sponsoring youth-oriented events as a high priority activity.” The real reason behind these sponsorships, she said, was to “help position vaping (and the sponsored brands) as edgy and appealing, and showed them being used in fun settings by people who were role models.”

For anyone who wanted to follow those role models into the fun and irresistibly cool world of vaping, it was ridiculously easy: a 2019 study in the New Zealand Medical Journal found 40% of websites offering vapes for sale in NZ then did not even have a tick-box confirming if visitors were over 18, and only 10% of websites did any kind of age verification prior to purchase. Not a single social media ad they saw had any sort of age verification process.

By the time the Ministry of Health got round to tightening this loophole, with the Smokefree Environments and Regulated Products (Vaping) Amendment Act, it was November 2020. Big Vape had enjoyed free reign over the New Zealand market for years by now, and vaping was well and truly established in the mainstream. Today, just 6% of students who vape do so to try and quit smoking. 80% of them began out of “curiosity” or for “enjoyment”.

Liv* was one of them. While she had never smoked or vaped in her life, going stir-crazy during the first lockdown in March 2020, she told Critic Te Arohi that it was “genuinely just boredom!” that spurred her to give vaping a try. “It curbed my appetite” and kept her from gaining weight, which she said was a “big reason” why she continued. “Now, I’m essentially Thomas the Tank Engine, but with vape smoke coming out the top.”

Martin*, a student, told us that he began vaping to quit smoking. He observed, though, that [non-smokers] are “taking up vaping in mass numbers”. For him, vaping seems like a much 'cooler' thing to do, which makes it much more socially acceptable. Like now you don't stink like ciggys and can vape inside.”

Though Big Tobacco and a glaring loophole paved the way to mass vape acceptance, the real action is now happening in China. Vape manufacturing is now dominated by companies based in the tech manufacturing hub of Shenzhen: including Uwell, SMOK, Innokin, Vaporesso and Geekvape. With access to sophisticated manufacturing, a huge pool of skilled workers and a fast-moving, cutthroat business culture, they’ve been able to corner the market with advanced, low-priced hardware. It’s a good bet that even your non-Chinese branded vapes would’ve been made nearby to, if not by, one of these companies.

Thanks to this, vapes are now cheap as chips - in fact, going for anywhere between $40-60 in most stores, they’re probably one of the cheapest electronics you can buy right now. Vuse sells their ePod 2 for just $10. They’re so cheap, in fact, that Vuse will give them away to anyone with an email address and a valid ID. Alt, which is connected to the VAPO chain of vape shops, also dangle a similar offer to smokers and vapers on their website.

Professor Hoek said these giveaways were not all bad, noting that it is “important that people who smoke and haven't been able to quit can access reduced-harm products; providing these people with a free vape could help them move from smoking to vaping.” But she emphasised that more needed to be done to “protect young people who neither smoke nor vape”.

She drew a contrast between the Vuse and Alt giveaways. While Alt very explicitly targets current smokers, for example by talking about “quitting [smoking] and switching,” the Vuse website was a lot more “ambiguous,” with the line “power your switch” as the only real nod towards current smokers. Regardless, she felt giving away vapes online was not great: “People trying to move from smoking to vaping are embarking on a complex behaviour change and offering a free vape with no advice is not an ideal way to ensure that transition happens smoothly and completely.”

Student Jason* experienced first-hand just how tricky this transition could be. He took up vaping to limit his smoking habit, but never realised that “cigarettes only had like 2-4mg of nicotine per cigarette, compared to the 40mg vape I was hitting”.

After struggling with a vape addiction for a bit, he decided to go back to square one: “ I got rid of my vape and went back to cigarettes.” Jason says that doesn’t enjoy smoking, because it’s “hard work,” but observed that the stigma makes it a lot easier to control his cigarette use. “In order to smoke you have to go outside, so I’m hitting the darts way less than the vape. The smell clings to you, so if you have an important meeting or something you’ll avoid smoking first.” He says his unorthodox method “seems to be working”: “I haven’t bought a pack in a while, and although I hit friends’ vapes when out on the sauce, I still don’t own one myself.”

Dr. Ben Wamamili is an adjunct research fellow at Canterbury Uni, who has extensively researched vaping prevalence among young people. He is pessimistic about turning the tide on vaping in Aotearoa: while the new legislation has eliminated the most blatant examples of vape marketing, he notes that vaping rates have not stopped rising, and in fact have been accelerating. In addition, Dr. Wamamili says the new laws have been ineffective in stopping under-18s from getting vapes from siblings, older friends or buying them online. “By the time students join tertiary education, they are old enough to buy vapes legally, and are sufficiently addicted to keep the habit going!”

He is, however, more optimistic about helping a new wave of addicted vapers kick their habit, hopefully without turning back to tobacco. Along with the Paediatrics Department at Otago Uni in Christchurch, he’s currently working on “an educational intervention, with input from high school students, to increase their knowledge on vaping-related health risks and hopefully encourage vaping cessation. If successful, this could help to reduce the numbers, and potential health effects going forward.”

The rise of the vape, then, was no coincidence. It wasn’t the result of morally weak youngsters wanting to “stick it to the man” and indulge in their vices. Nor was it the capitalistic wet-dream of a well-designed product winning over discerning smokers and naturally conquering the market. Rather, the transformation of the vape from a quit-smoking aid to a chic lifestyle choice was a deliberate, systematic effort by Big Tobacco to, once again, make nicotine addiction central to the lives of young people.